I couldn't believe it -- I had jumped into the pages of National Geographic. I had sprung myself across a rickety makeshift bridge, gaping at a raging river in the highlands of West Papua, Indonesia, and there I stood, mesmerized by a procession of men wearing nothing but feathers in their hair and koteka, gourds, on their penises. 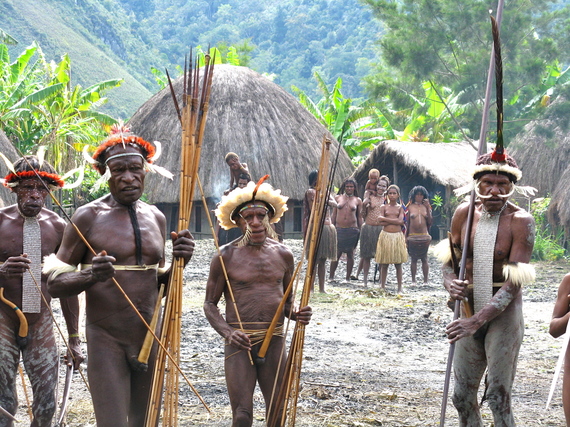 I stood in the misty rain, alongside my Papuan guide whose teeth were red as blood from chewing betel nut, praying that I wouldn't catch fleas from sleeping in the round straw hut where I would be bunking with the village's women, children and pigs. That night I sat around the hut's lung-choking smoky fire exchanging shy stares and smiles with the Dani women and children, as we each grabbed fingers full of cooked sweet potato greens, slurping them noisily into our mouths. Rather than stressing about the rat scurrying around the edges of the hut's rounded walls, I focused on the young girl making a bilum, a string bag for carrying anything from babies, to newborn pigs, to hundreds of pounds of sweet potatoes. 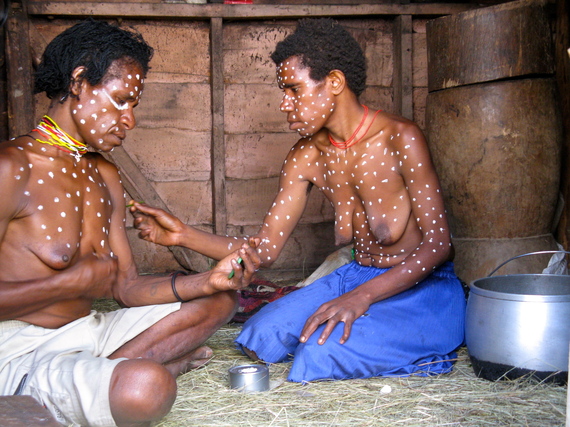 I couldn't believe I was there. Me, a young woman from Rochester, New York. I had somehow managed to become a person who cycled the crowded streets of Cambodia, biked the mountains of northern Thailand and was now in a remote village worthy of National Geographic. It was intoxicating.

So you can imagine my excitement when, back in my New York humdrum life, I stumbled upon a book about Annie Londonderry, the first woman to cycle around the globe. And no, she didn't do it in the 1990s. It was the 1890s!

Obsessed with everything bicycle and energized by travel stories, particularly those of intrepid women, I couldn't wait to get my hands on a copy of her biography Around the World on Two Wheels: Annie Londonderry's Ride. When I learned that Annie Londonderry's real name was Annie Cohen Kopchowsky, that her first language was Yiddish, and that she lived with her peddler husband, kids and extended family in a crowded tenement in Boston's West End, I was entranced.

When Annie set out on this epic journey as a novice biker at age 24 in 1894, it was because two wealthy men were betting whether a woman could fend for herself and earn $5,000 while cycling the world in 15 months. Much was happening in both the women's movement and the bicycle craze, and Annie was zealous about cycling her way out of the traditional woman's role. She happily reinvented herself with an exciting new identity, found lots of sponsors, and gained both freedom and fame.

The author, Annie's great-grandnephew Peter Zheutlin, has filled his pages with countless news articles from around the globe, many of which, however, indicate that she was at times a sensationalist, not so wed to the truth.

While it becomes clear that she didn't cycle nearly as much as purported, and likely didn't get into some of the scuffles she alleged, Annie most certainly demonstrated a brilliant ability to seize authentic adventures and to captivate audiences. She inspired girls and women to become increasingly independent and freethinking, using the bicycle as her vehicle.

Kudos to Annie for embracing the bike! According to Susan B. Anthony, "Bicycling has done more to emancipate women than anything else in the world." 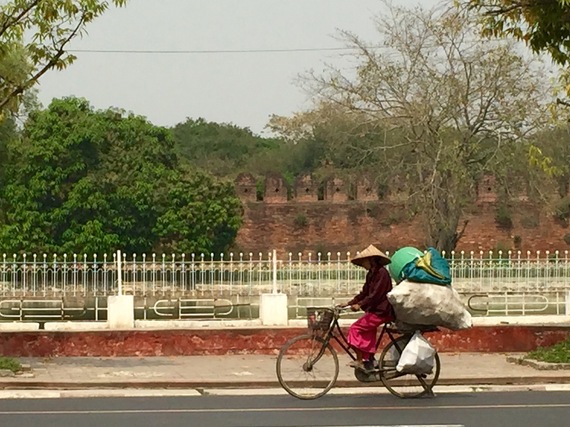 Whether Annie actually cycled the globe or took steamboats and trains so she could cover more countries, hear more languages and taste more flavors, I appreciate how she quenched her thirst for adventure. We are kindred spirits, Annie and I, with a shared passion for travel, independence and the power of wheels.

In some ways, I feel like she is with me on my journeys. When I cycled the length of New Ireland, Papua New Guinea, hydrating on coconuts and rolling from village to village, Annie was surely with me. When I biked the hills of Tuscany to raise money for a domestic violence shelter, I'm sure Annie was cheering me on. And when I wave at Lady Liberty each day on my commute across the Brooklyn Bridge, Annie and her immigrant family are certainly by my side.

​I'd like to thank Zheutlin for introducing us to his great-grandaunt. Annie Kopchowsky (Londonderry) and I certainly come from the same sisterhood, curious about the world, and capable of anything. 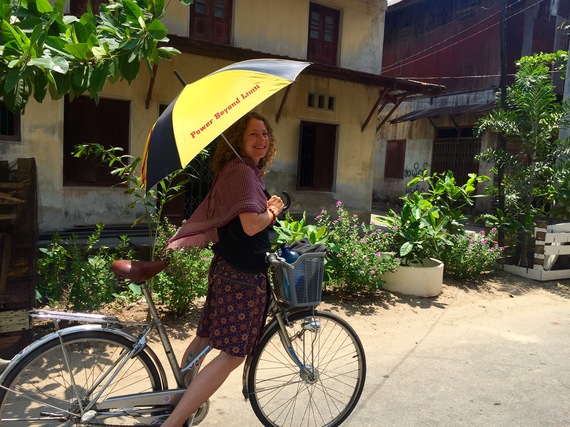