Earlier this month, some three hundred lesbian, gay, bisexual, and transgender (LGBT) Asian Christians and allies from around the world gathered in Hong Kong for the Amplify 2013 conference. The conference was held from June 7th through 9th, and delegates from nearly a dozen countries were represented at this event, including Australia, China, Hong Kong, Indonesia, Japan, Malaysia, the Philippines, Singapore, South Korea, Taiwan, and the United States. 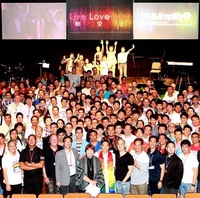 The theme of the conference was "Live, Love, Lead," and the gathering was an incredible witness to the international ministries of queer Christians of Asian descent. I was privileged to be a keynote speaker at the conference, along with the Rev. Dr. Cindi Love, the Executive Director of Soulforce; and the Rev. Dr. Boon Lin Ngeo, also known as O. Young, who is an internationally-known pastor and author of Malaysian descent.

This was the fifth incarnation of the Amplify conference, and it was the second time that it was held in Hong Kong. The conference was held at the Youth Square conference center in Chai Wan. The members of the Blessed Minority Christian Fellowship, the LGBT church in Hong Kong, as well as its pastor, the Rev. Silas Wong, worked hard to ensure its success. The event received strong coverage from the English-language press in Asia, including Time Out Hong Kong and the Guangzhou-based videographer Jefferson Mendoza's internet video news series. 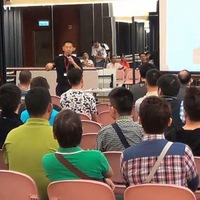 The conference began on Friday, June 7th, with several pre-conference workshop events for church leaders and for church musicians. That evening, Rev. Dr. Ngeo preached a rousing sermon at the opening worship service on the theme of "Live." He spoke about how we, as LGBT Asian Christians, are called to live our lives in accordance with God's vocational plans for us. The lesbian Australian singer Natasha Holmes was a featured musician throughout the conference.

On the morning of Saturday, June 8th, the Hong Kong Queer Theology Academy led a feminist gender-inclusive worship service that also drew upon traditional Chinese religious practices. Leaders of the worship service included Dr. Rose Wu, Pearl Wong, Joseph Cheung, Eric Sin, Davy Wong, and Teresa Yip. Rev. Grace Fok of the One Body in Christ Church in Hong Kong preached a moving sermon about the challenges that she has faced as an out lesbian pastor. 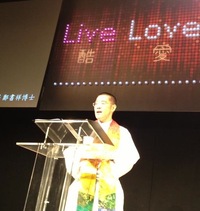 The conference continued on Saturday with eight workshops for the delegates that were conducted in Cantonese, Mandarin, and/or English. On Saturday evening, I preached at the worship service on 1 John 4:16-20 and the theme of "Love." I spoke about how LGBT Asian Christians are called to a ministry of radical love that brings people from a place of fear to a place of love. The service concluded with an anointing service that commissioned the delegates to a ministry of radical love.

The conference ended on Sunday, June 9th, with a morning communion service. Rev. Dr. Love preached on the theme of "Lead" and how we as lay and ordained leaders must view every wall as a door, or an opportunity to serve God. The communion rite was led by Rev. Miak Siew of the Free Community Church in Singapore, and it was jointly celebrated by a dozen queer Asian pastors from around the world in their own languages, including Cantonese, English, Mandarin, and Tagalog. After receiving communion, the conference delegates had the opportunity to pray individually with pastoral leaders. 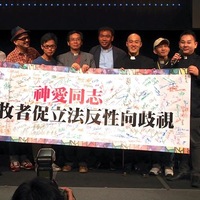 Following the conference, there was a Sunday afternoon press conference that was co-sponsored by the Big Love Alliance, a Hong Kong organization that advocates for the passage of civil nondiscrimination laws for LGBT people. The openly-gay pop star Anthony Wong spoke at the press conference, as well as Rev. Dr. Ngeo, Rev. Siew, and the Rev. Elias Tseng from Taiwan.

Participating in the Amplify 2013 conference was one of the most moving experiences of my life. A big thank you goes to the conference organizers Paul Lucas, Pastor Gary Chan, and Sam Li; the conference musicians led by Ming Quay; and the conference translators Jason Ho, Kurt Law, Kevin She, and Conan Yin. 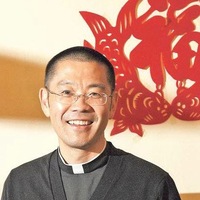 As an openly-gay Chinese American theologian, seminary professor, and minister, I will always remember my experiences of living, loving, and leading in the midst of my queer Asian siblings from around the world. I have made hundreds of new friends at Amplify 2013, and it is my hope that our three very special days together in Hong Kong will continue to bear fruit for years to come.