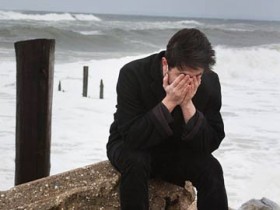 You have to pay close attention or it will catch you by surprise.

Divorcing couples do move through predictable and understandable stages of divorce, each associated with different practical concerns, emotions, and typical behavior patterns.

A common explanation of the stages of divorce characterizes the divorce as the "death" of the relationship and draws on Elisabeth Kubler-Ross's well known writing about the Stages of Grief to explain that people typically go through 5 stages of loss and recovery as a result of the divorce: Denial, Anger, Bargaining, Depression, and Acceptance.

You've likely read these models before. And, because they can be useful when helping individuals understand their reactions to the divorce, I created and use one of these grief models, too.

My explanation of the phases of divorce includes the following 7 Stages of Rebuilding Your Life After Divorce. (Notice this model focuses on the final outcome (recovery) not the initial feeling (grief). 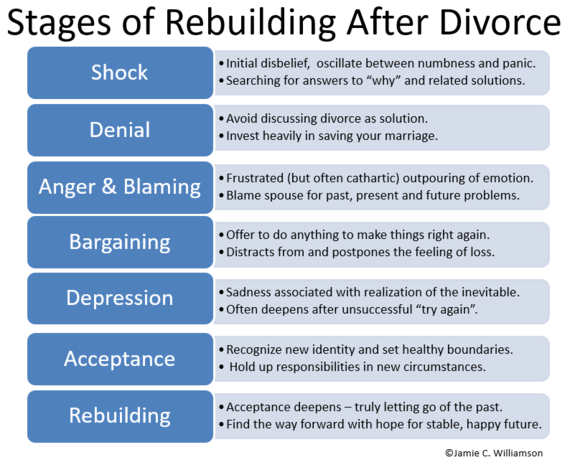 Depicting the life-rebuilding process in linear stages can help people know what to expect to experience when they go through a divorce and it can help people understand their own and their partner's feelings and behavior. These stage models help people realize that they are experiencing a normal response to a major life-changing event.

Do people go through the stages sequentially?

Not typically. Individuals generally move through all of the Stages of Rebuilding After Divorce over time; but, during this challenging time of transition individuals often move in, out, and around the stages as they work toward the process of acceptance and rebuilding their lives. If individuals get "stuck" in one of the stages, they can seek help from a therapist or family mediator in order to move beyond that stage.

Do spouses experiences the stages at the same time?

The responding spouse often perceives the initiating spouse as indifferent or unfeeling, with comments as "you don't seem so sad....you don't seem to care at all". And, in some cases that could be accurate.

More often, however, the initiating spouse has actually cautiously contemplated divorce for some time and, as such, worked through most of the initial emotional stages of divorce BEFORE overtly introducing the topic of divorce to the responding spouse. This happens in the relatively calm, Contemplative Phase of divorce that often goes unnoticed by the responding spouse. Yet, it also often leads to divorce initiation and engenders the emotional stages of divorce and rebuilding.

When basically well-adjusted people begin to think about divorce, they typically experience a great deal of cognitive dissonance associated with balancing their personal needs and desires with their competing desire to uphold their commitment to their spouse, their marriage, and for some, their children, as well.

So, they do a lot of thinking. They have moved beyond denial and experienced anger and sadness. They assess what they appreciate and dislike about their marriage, their spouse, and how their spouse treats them. They consider whether or not they would be justified in ending the marriage. They consider how life would actually be better (or worse) if they were divorced.

Paradoxically, when people truly begin to contemplate divorce, they often are on their best behavior. They haven't decided what they want and realize that in the end, they could decide they truly want to stay married. So, they don't want to initiate conflict or degrade the marriage relationship, and they don't want to send the signal that they are contemplating divorce, in case they change their mind.

If you and your spouse are struggling with the emotional Stages of Rebuilding Your Life After Divorce, share this post and try to work it out. You may want to consider transformative, divorce mediation that will help you remain amicable while you work through your issues and reach agreement on how you will build a stable, but separate future for your selves.

If you think your spouse might be in the Contemplative Phase of Divorce, share this post as a way to initiate a conversation about whether or not you are both happy in your marriage. You might be surprised how often, with an early intervention, couples can work it out.

Either way, let me know if I can help.