The first time I saw the shoes my 13-year old daughter Hannah wanted to wear to middle school graduation, I flat out refused to buy them for her. Frankly, I was astounded that she was asking for them with a straight face. I mean, they had four-inch heels! I informed her that I would never in a million years buy those shoes for her. There was no reason for a 13-year old girl to wear four-inch heels anywhere -- unless she was starring in the movie Pretty Baby, which my daughter definitely is not. 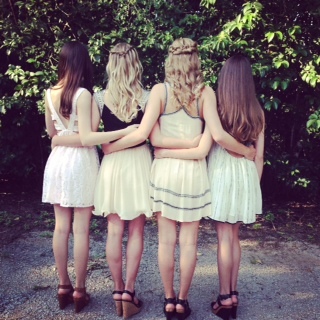 This did not end the discussion. She told me that "everyone" would be wearing four-inch heels. I laughed out loud at her response. What a classic statement from a 13-year-old. Some things never change, I thought to myself.

"What about your friend Jenna?" I asked. "Is Jenna wearing shoes with four-inch heels?" When Hannah didn't have a ready answer, I jumped in again. "I'll text her mom and find out." I fired off a quick text right then and there. I was pleased at how calmly I was handling this difference of opinion. I wasn't mad. This situation wasn't complicated. This was a garden-variety parent-teenager standoff. All I had to do was employ tried and true strategies from the Responsible Parent Playbook.

I know Jenna's mom pretty well. I both like her and respect her parenting. I knew full well that Jenna wouldn't be wearing shoes with four-inch heels. My sole objective in texting Jenna's mom was to debunk my daughter's statement that "everyone" would be wearing inappropriate shoes to commencement. To make sure Hannah understood that, I explained that whatever Jenna's mom's answer was, my answer would remain the same. After all, I didn't subscribe to the wishy-washy philosophy of parenting relativism.

By the time we left Nordstrom that day, we weren't exactly speaking. That's okay, I thought to myself. Sometimes parenting requires you to be unpopular. I felt like this process, although not exactly pleasant, was nonetheless valuable. My daughter understood that I had clear rules and I wasn't afraid to stand up for them, even if that meant having to endure stony silence and an artcic climate for the entire ride home.

Later than evening when Hannah's mood had rebounded, we did some online shoe shopping. I expected that after a little looking and possibly even a little more arguing, we would finally find a pair of shoes we both approved of. Then, she would get shoes she liked, I would have done my job as a parent, and we both would better for having lived through the experience.

It didn't work out that way. As it turns out, if you rule out kitten heels (which are completely hideous, according to my daughter), boring flats, and "old lady" shoes, it is really hard to find shoes with a decent size heel that don't look like hooker shoes -- at least to me. That's when I first noticed the ground underneath me shift a little. Suddenly, I wasn't a thousand percent sure that the shoes I had vetoed at the mall were actually inappropriate, after all. That's the thing about parenting a 13-year-old girl. It has a way of making you doubt things that you were previously a thousand percent certain of. (I mean, is that sky really blue?)

We were looking at the entire inventory of women's strappy summer shoes at regular stores, not the subset of stores that market specifically to tweens, so I knew this wasn't part of the creepy trend of sexualizing apparel for young girls. I wondered if my judgment was off -- if standards had changed and I had somehow missed the bulletin. Maybe I was like the lady who works at the post office who goes to the effort of curling her bangs with a curling iron each morning, not realizing that the look she works so hard to achieve is no longer in style (and maybe never was).

A day or two later, Jenna's mom texted me a photo of the shoes that Jenna was going to wear to commencement. I stared in disbelief. Turns out Jenna would be wearing four-inch heels, after all! I felt the ground shift a little more, and I fought to keep my balance.

The next weekend we headed back to the mall, and this time we brought her dress with us. The plan was to track down Jon, a shoe salesperson at Nordstrom whose opinion we both trusted. We showed Jon the dress and told him that the occasion was an 8th grade commencement ceremony. I explained that we needed shoes that we both could agree on -- shoes that were fashionable, but also appropriate for the occasion and for a girl her age. He nodded his head, examined the dress, and disappeared for a minute. When he returned, he was carrying three boxes.

"I think you're going to like this first pair the best. It's simple and classic and it goes perfectly with the dress." Now we're getting somewhere, I thought to myself. He opened the box to reveal a pair of 5" stilettos. Hannah took one look at the shoes, then whipped her head around to take in my reaction. Suddenly, the floor lurched sideways and I was completely disoriented. For a split second, I wondered if Hannah had somehow worked this all out with Jon in advance.

"No, no, no. We're looking for something that looks less hookerish," I managed to blurt out.

"Oh, come on, Mom," Jon said. (Jon doesn't know my name, so like the nurses at Hannah's pediatrician's office, he simply calls me mom. I usually find it mildly entertaining, but at this moment it sort of felt like my kids were ganging up on me.) "Hooker shoes don't look anything like this. Hooker shoes have acrylic heels -- the clear plastic kind," he explained. "Everybody knows that. But let's take a look at the other two pairs," he offered. "Maybe you'll like them better."

Hannah went to get the original pair of shoes -- the ones that started the whole argument. She showed them to Jon, he agreed they went well with the dress, and he brought out a pair in her size. She tried them on, and walked to the mirror and back. I still hated them, but not as much as I did the first time I saw them. I wondered if this wasn't just more relativism at work -- that next to the 5" stilettos, the 4" wedges suddenly looked way more reasonable.

"But the heels are four inches high!" I protested.

"True, but they're wedges, Mom. So, if you look at the actual pitch between her toe and her heel, it's only about a 2" differential."

"But that doesn't change the fact that they're still four inches off the ground! They still look like hooker shoes," I repeated, only this time with less confidence.

"No, they don't. These are nice, summery shoes. Your baby's growing up, Mom."

Is that what this was about?

After watching Hannah take a few more laps around the shoe department in the shoes, I felt there was a decent chance she could make it through the graduation ceremony without twisting her ankle.

I ended up buying her the shoes, and I felt okay about it, but not great. Then a couple of days later Hannah told me that another friend would be wearing the exact same pair to the ceremony, only in a different color. And although I always thought I was far too superior of a parent to be susceptible to parental relativism, I suddenly found myself feeling much better about Hannah's shoes. Not only was I reassured by the widespread approval of them by parents whose opinions I otherwise respected, I was very relieved that my daughter wasn't going to be the only girl in hooker shoes at middle school graduation. I know that shouldn't have mattered, but somehow it did. When commencement finally rolled around, Hannah's shoes were completely unremarkable. As it turned out everyone actually was wearing 4" heels, just as Hannah had said all along.

I could say that the whole experience taught me some important new parenting principle, but that would be a lie. To the contrary, the episode has left me with less certainty about what I know and don't know -- both about parenting and footwear. You might expect this uncertainty to be confusing, but it is oddly liberating, instead. In the beginning I was so sure that the shoes I was looking at were hooker shoes, and if Hannah wore those shoes to graduation it would represent a colossal failure in parenting. But she (along with almost all the other girls in her class) did wear four-inch heels, and yet the sun still manages to rise each day. There's tremendous comfort in that.

Maybe, just maybe, the next time I find myself crosswise with Hannah on something like this, I'll be able to refrain from taking such a hardline position at the outset. I'll say what I think, of course. (Given my genetic makeup, there's no chance I'll stop doing that.) But then I can go about gathering and processing information, and see if my opinion changes as a result. In the end, I might stick to my original position, or maybe I'll reach another conclusion. But one way or another, we'll figure it out. And either way, we'll benefit from the experience.

More:
Parenting parenting teensParentsmoms and daughtersparents-moms
Newsletter Sign Up
Raise the kind of person you'd like to know
Subscribe to our parenting newsletter.
Successfully Subscribed!
Realness delivered to your inbox