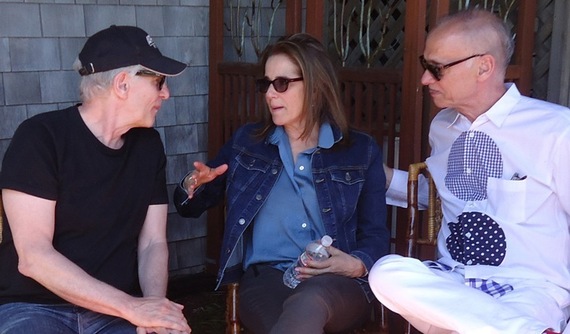 In this exclusive audio montage I talk with gay and straight celebrity filmmakers at the 16th annual Provincetown International Film Festival press luncheon.

Next I talked with Debra Winger (Terms of Endearment, Rachel Getting Married), who received the Faith Hubley Career Achievement Award.

Then I talked with writer and director David Cronenberg (The Fly, Videodrome, A History of Violence), who received this year's Filmmaker on the Edge Award.

I also talked with all the celebrities and filmmakers about their spin on LGBT issues.

Then director Tom Dolby talked about his film Last Weekend, which opened the film festival. The film stars Patricia Clarkson (Pieces of April, Far From Heaven), who received the Excellence in Acting Award.

Next, director John Waters talked about his new book Carsick, which is currently on the New York Times bestsellers list. Waters was also very generous in his advice for new filmmakers.

HBO's new documentary The Case Against 8, which is currently premiering on the cable network, was screened. I caught up with Prop 8 plaintiffs Kris Perry and Sandy Stier, who talked about their experience being filmed for five years leading up to the Supreme Court decision that found Prop 8 unconstitutional. We also chatted about what it was like to work with the legal team of Ted Olson and David Boies, and what effect the experience had on their family.

Then I talked with filmmakers Fermin Rojas and Bruce Donnelly about their documentary Alumbrones, which addresses the work and lives of 12 contemporary Cuban artists living in Havana today. Through in-depth interviews the film covers a range of subjects and issues, from supply shortages to constant blackouts and how the artists are able to create their canvases in spite of these extreme hardships. Rojas and Donnelly also discuss their next project, which chronicles the establishment of the first gay men's choir in Cuba.

The Provincetown Film Society, Inc., is the year-round organization and home of the Provincetown International Film Festival. PFS is dedicated to showcasing new achievements in independent film and honoring the work of acclaimed and emerging directors, producers and actors. An integral part of PFS's mission is to contribute to the economic and creative vitality of America's oldest art colony.