For the past 20 years, I have had the great pleasure of working with Jennifer Grossman. A feminist and a libertarian, Jennifer's work ethic and integrity have impressed me endlessly. In her career, she has done important work in the fields of media, nutrition, and policy -- all the while maintaining a strong tie to Ayn Rand's work -- work that almost 50 years after Atlas Shrugged was published, continues to inspire millions.

My grandfather and Rand's friend, Lowell B. Mason, introduced us before the end of Ayn's life. We developed an intellectual friendship and spent hours talking about my own life-long interest in her work -- particularly in her advocacy of the use of business to help people's lives. Despite our philosophical differences, there was no denying the power of Rand's genius. Today, Jennifer shares with us a fresh perspective on Rand's memory, the relevance of her work in the 21st century, and even dating!

Steve Mariotti: How relevant is Ayn Rand to the younger generation, many of whom have never heard of her?
Jennifer Grossman: "The question isn't who's going to let me -- it's who's going to stop me." That quote, one of the all-time most popular of Rand's, speaks eloquently to the Millennial generation's can-do, idealistic bent. She questioned authority like none other -- and if that isn't relevant to teenagers and young adults, I can't imagine what is.

SM: How did Ayn Rand personally affect the way you live your life.
JG: She inspired me to stay true to my own convictions, regardless of the opinions of others. Politics aside, most women struggle with the desire to please others, and the social expectation to put others' needs above our own. Ayn Rand gives all women -- all people -- encouragement to put themselves first. And I'm not alone. Some leading lights in entertainment have also been influenced by Ayn Rand, including Brad Pitt, Angelina Jolie, Jim Carrey, and Rob Lowe.

SM: What are your goals for the organization?
JG: I want to get young people in general, women and immigrants in particular, engaged with these powerfully transformative ideas -- not just via philosophy and fiction, but via art. After all Ayn Rand was an artist -- she projected a vision of a better world, and of heroic characters, in her novels such as Atlas Shrugged, The Fountainhead, Anthem, and We the Living. Most think tanks engage primarily cerebrally -- but I'd like to engage visually, artistically, emotionally as well. We'll do that with a series of art contests, which we'll share via Instagram. We'll also live up to the name of our organization as a "Society" by hosting social events, salons, where people of like minds can meet.

SM: What did you do before becoming CEO of the Atlas Society?
JG: I ran started and ran a nutrition institute for David H. Murdock for many years -- promoting the health benefits of a plant-based diet. I've done work in educational opportunity and reform -- both as Education Policy Director at the Cato Institute, and also in my work helping legendary financier Ted Forstmann start the Children's Scholarship Fund. I wrote speeches for the first President Bush after I graduated from Harvard, where I studied government. Most recently though I was a Health Editor at a media startup that I helped my friend Laura Ingraham to launch.

SM: So, lots of health and nutrition. Does that connect at all to your current work? After all, Ayn Rand was a smoker and probably never exercised a day in her life.
JG: Good question! To me, Rand's philosophy celebrates reason, willpower, and this life as lived here on earth -- taking responsibility for one's health is essential thinking clearly, acting independently, and enjoying oneself fully. How can you be fully free and rational if you are addicted to alcohol, cigarettes, food, etc.? Similarly, overwhelming research shows that physical exercise is one of the best things you can do for your brain -- so any philosophy reliant on optimal cerebral functioning should go hand-in-hand with optimal physical health. 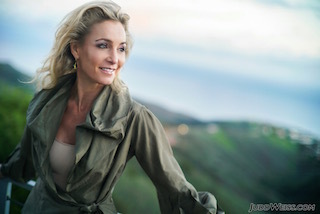 Jennifer Anju Grossman at Scorpiesse, her home on a cliff in Malibu (credit: Judd Weiss)

SM: Who's your biggest inspiration?
JG: Well, rival only to Rand would be my grandmother, Dorothy Draper, who was very similar to Rand in temperament, though politically polar opposites. Nana was one of the first female presidents of the American Society of Interior Design, an artist, sculptor, and doyenne of her social set in San Francisco. 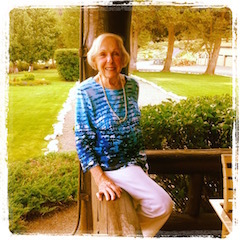 Jennifer's grandmother at 99 years old -- an artist, sculptress, matriarch presiding at the club in Northern California

Also my parents, who recently celebrated their 50th wedding anniversary. My mom was a 17 year old Louisiana southern belle when she met dad, who was a 19 year old Brooklyn Jew, driving across the country with a friend. It was love at first sight, and a few years later they eloped in defiance of my mother's family's objections to her marrying a non-Catholic. They chose love over their religious differences -- and this resonates with Rand's secular world views. My parents joined the Peace Corps -- and had me while they were serving in India. They both worked to make the world a better place -- she as a social worker, he as a famous cardiologist -- and inspired me to also pursue a career where I could help others. 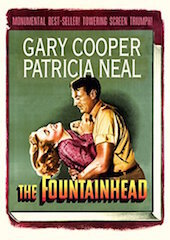 Gary Cooper and Patricia Neal in the screen adaptation of Ayn Rand's The Fountainhead.

SM: Tell us about your article in Huffington Post called Date the Atlas, Not the Shrug: Ayn Rand and Dating advice
JG: Far from retro, Rand's heroines were independent, sexually liberated career women who multi-dated, and multi-married, until they landed their Hero. While the article created a lot of hubbub, the advice is fairly straightforward -- don't date men you don't admire, don't date men who don't admire you, and don't sacrifice for a man who isn't worth it.

SM: What about her political philosophy?
JG: She believed in individual rights -- that the individual did not exist for the government, or "the people" but had a right to live their life they way they saw fit. She believed individuals, consenting adults, should deal with others based on mutual consent rather the initiation of force. It's the voluntaryist principle -- not that different from the Eastern concept of "ahisma" -- the non-initiation of force.

No doubt her experience as a child, having the Communists expropriate her father's pharmacy, and expel her family from their home,deeply influenced her aversion to collectivism. She came to America, and told the world what was happening back in Russia at a time when Communism held a certain idealistic glamour among the intellectual elite -- who didn't like having this pushy broad, a Jewish immigrant, with her thick accent, come in and tell them they were wrong 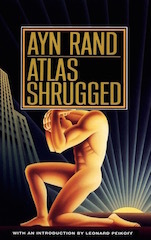 More than 7 million copies of Atlas Shrugged have been sold since it was first published -- 500,000 in one recent year alone.

SM: Why were you so attracted to her ideas?
JG: Her logic, her portrayal of a heroic vision, vs. a neurotic/dysfunctional one. But on a deeper emotional level, the destructive power of envy is something I experienced as a child. I remember being put on a mock trial for being "too conceited." How third graders even knew what that meant is beyond me, but the gist was I thought too highly of myself -- and apparently that made other children angry. But thinking highly of themselves is exactly what children -- particularly girls -- need to do more of.

SM: What do you like to do for fun?
JG: Yoga! Downward dog, upward freedom. Also barre class is a lot of fun. Watch makeup videos -- Wayne Goss or Kandi Johnson. And entertaining has always been one of my favorite things to do, gathering interesting people with diverse points of view, creating an atmosphere of ease and elegance.