Meet Charly and Margaux, also known as Chargaux. They play violin and viola, respectively, but not the kind you tuned out at your high school orchestra concert. The two Brooklyn-based artists rework the traditionally classical instruments' vibes, releasing bubbling, boiling liquid sounds, somewhere between the brashness of jazz and the mellowness of R&B. 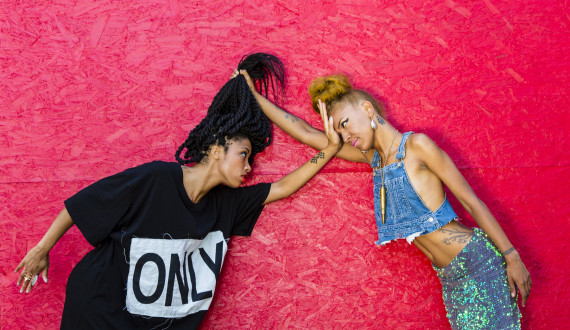 The musicians met by chance three years ago and have been playing together ever since. Their EP "Broke and Baroque" comes out next week -- you can hear their single "I'm So Pretty" here -- but they've already captured the attention of New York's art and fashion set with their infectious and unexpected covers of songs like Beyonce's "Partition" and Kanye's "Flashing Lights," which they played at last week's Opening Ceremony fashion show. Oh yes, they also did the "cute little solo" at the end of Kendrick Lamar's "Bitch Don't Kill My Vibe." The fact that the ladies have flawless style themselves certainly doesn't hurt.

"We met in Boston," Margaux recalled to The Huffington Post. "I used to work this corporate job and I was on my lunch break and right by Bank of America I saw this girl playing the violin with cool hair and dope clothing and I said, "Hey, I play viola." I said we should jam sometime. I meant to send a text message to my mom after saying I met this really cool girl, but I accidentally sent it to her. And she wasn't creeped out by it. The next day we played together on the same corner that I saw her. People started taking pictures, videos, and started asking if we had an album out. It was totally by chance."

The artists joined forces and began jamming out where many budding musicians get their start: the New York subway stations. "When you're in the subway, you're interacting with everyone and it's really funny to see that with one song you can touch that corporate guy and touch that child," Charly explained. "Music really does touch people. We get so much foreign money, we have these complete collections. We don't know where they're from or what they speak -- people are showing so much love."

The subway is also where Opening Ceremony first spotted them.

Although their catchy covers are rapidly approaching viral status on the web, Chargaux stressed that their first love is creating original music. "We like to cover things but we don't want to be popular for that," said Charly. "It's about advertising and right now the music industry is so [pauses]... interesting, that all music is like a short advertisement for that artist's personality. Each single is an ad for what you're going to get on the album. We noticed that color stands out, beauty stands out, repetition stands out. It's kind of an intuitive artist thing."

When Chargaux talks about the color of music, they mean it more literally than you think. Charly has synesthesia, a neurological phenomenon in which stimulation of one sense leads to the automatic and involuntary experience of another sense. In her case, she can hear colors. "Because music is mathematical, and so is color, we have a way of organizing it," she explained. "We use synesthesia to map out our songs. Every pop song we hear has a color."

Again aligning the aural and the visual, Chargaux combines many of their live performances with art shows. Yes, they're both visual artists as well. "Visual art is just kind of a representation of emotion and music is also the same," said Charly. "Every time people ask me what kind of art I make, I just say it looks like sound when I'm done. Music is very human, art is very human. A lot of musicians make visual art, I'm just really about showing mine."

Added Margaux, "I think it's very common when you have a creative mind to have various outlets for it. Even the way that we dress adds to the visual portion, using our bodies as canvases and having it all connect."

Watching Chargaux perform does feel like viewing a performance piece, their bold outfits and ever-shifting hairstyles almost harmonizing with their sound. The philosophy behind dressing well flows smoothly with their inspirationally groovy mantra: "Keep going and be limitless."

Check out more of Margaux's visual and aural stylings below and experience the easy evaporation of limits for yourself.