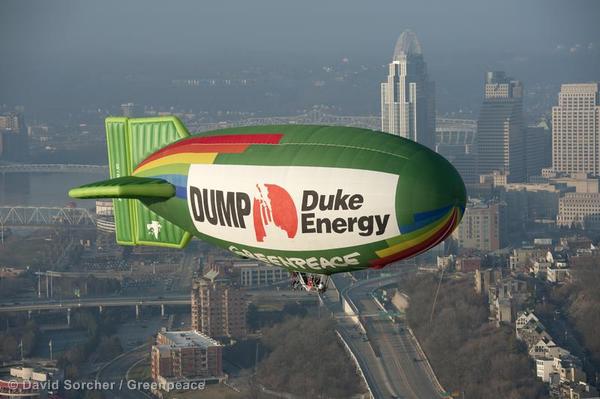 The Greenpeace Airship A.E. Bates flies over Cincinnati with a banner reading "Dump Duke" on one side and "Cleaner is Cheaper" on the other.

Today, Duke Energy found out that more than 50,000 commercial and residential electricity users in the city of Cincinnati, Ohio are dumping Duke and shifting to 100 percent clean energy.

Cincinnati is a trendsetter: it is the first city in Ohio, and the first of its size in the nation, to go 100 percent green.

The city is part of a much larger trend in which major electricity buyers like Cincinnati and even the social network Facebook are committing to shift from coal to clean energy, and in so doing putting companies like Duke-Progress, which will be the largest utility in the country, on notice.

This is big news.

The announcement is the culmination of a campaign that started last fall, when Ohio Citizen Action and Greenpeace ran a successful ballot initiative to allow the City to bargain for electricity on behalf of its residents. The voters passed the initiative by a resounding 59-41 percent. In February, the coalition was successful in rallying the citizens of Cincinnati to give the city a clear mandate to supply 100 percent renewable energy and no 'fracked' natural gas. The Council responded with resounding approval of the people's demands, unanimously passing a motion asking bidders to include a 100 percent Renewable Energy Credit option (in addition to a lowest cost electricity option).

Last month seven companies placed bids for the electric aggregation contract. First Energy Solutions won, with a proposal to provide power to Cincinnati using 100 percent renewable energy credits. A portion of this green electricity will come from local sources, including solar credits from the Cincinnati Zoo Solar canopy project. Some of the credits will come from outside the local area. According to the City Manager's office, the average eligible household will save approximately $133 per year on their electricity bills.

We hope the efforts of Cincinnati's leaders will result in a shift from the three dirty Duke coal plants surrounding the city to clean energy that will result in far more jobs and clean air for the children of Ohio. It would be a real shame if these three dirty Duke Energy plants sell electricity to other cities, send the profit back to HQ in Charlotte, NC and leave Cincinnatians with health problems from the pollution. That's not a fair deal for the residents of Cincinnati.

Duke Energy needs to be accountable to the people -- not their bottom line -- and shift their investments from coal to clean energy, phasing out these plants in the near future.

With big buyers like Cincinnati dumping Duke, this may happen sooner rather than later. In fact, this announcement occurred at the same time that Greenpeace ramped up its efforts to persuade some of the biggest electricity consumers -- IT giants and internet behemoths such as Apple, Microsoft, and Amazon -- to dump dirty coal companies like Duke and join Cincinnati in moving to clean energy. After all, we all deserve to be able to click, like, and share knowing the football field sized buildings that store servers aren't powered by the coal that is causing lung problems in our kids.

So far, nearly 65,000 people have viewed the video introducing iCoal, and 154,000 people have taken action, telling Apple to clean their cloud. Companies like Apple are at the forefront of innovation, and shouldn't be powering the future with dirty coal. If Apple listens to the people, Duke Energy will find its big corporate customers dropping it just like Cincinnati did today.

A renewable energy future for the city of Cincinnati is great news; it is a great first step in the direction we need to go as a nation. It is time to see real, deployed, and distributed renewable energy solutions across America.