Five minutes into watching the Oscar-nominated film "Dallas Buyers Club," I wanted to bury my tear-stained face in a bag of salty movie theater popcorn.

The movie's depiction of the AIDS crisis has sparked some emotionally charged reactions from the lesbian, gay, bisexual and transgender community as well. But as a beauty editor, I was also caught up in the dramatic physical transformations of actors Matthew McConaughey and Jared Leto. Months later, I am still awestruck by makeup artist Robin Mathew's ability to create such convincing rashes and lesions on a $250 [supplies] budget.

So, how exactly did she do it? Mathews recently dished about her "Dallas Buyers Club" beauty secrets.

Spoiler alert: Read on to find out how this professional snagged an Oscar nod thanks to her ingenious use of grits, MAC lipstick and a lot of tanning products. 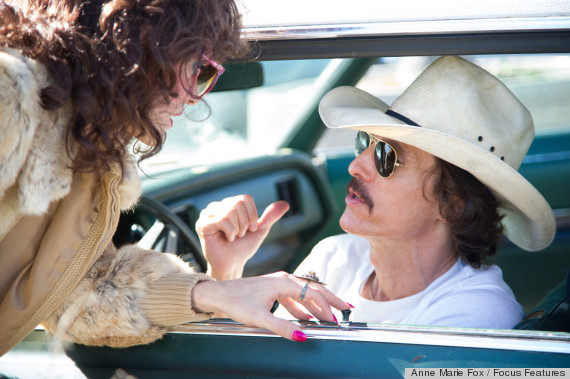 What was it like working with the most tanned man in America, Matthew McConaughey, and Jared Leto, an actor who is no stranger to makeup?

Both Matthew and Jared were amazingly supportive of this makeup process, and they were 100 percent involved. They realized how important it was that they look like, you know, like they had these different stages of full-blown AIDS. And it was difficult because the only time the camera wasn't rolling was basically during our lunch breaks and makeup changes.

The director, Jean-Marc Vallée, shoots without any camera or lighting setup. So we didn't have a grip or lighting department. The camera was always ready to roll in 5 minutes. We just shot, shot, shot and never stopped. For them to actually say, hold on a second. We gotta take 45 minutes, or whatever it was to do this important makeup change, really was a great deal of help and support. And I'm so grateful for that, and it make a big difference in the film, I think.

What type of research did you conduct to really nail down the aesthetics?

We were lucky through the production to hook up with Dr. David Hardy, an infectious diseases specialist. He really talked me through what the physical stages of AIDS looked like.

There's three common physical traits we see with people with full-blown AIDS -- they get extremely skeletal in the face; they get a rash called seborrheic dermatitis, which is kind of a rosacea-colored, patchy, flaky dry rash; and then, of course, lesions. So it was so important that they look like they were really sick. Like they were AIDS patients ... pure realism. It couldn't look like makeup and it couldn't look like a Hollywood version of AIDS. It had to be real, which goes along with this director's style of shooting, and I’m so excited after viewing the film that we accomplished that. 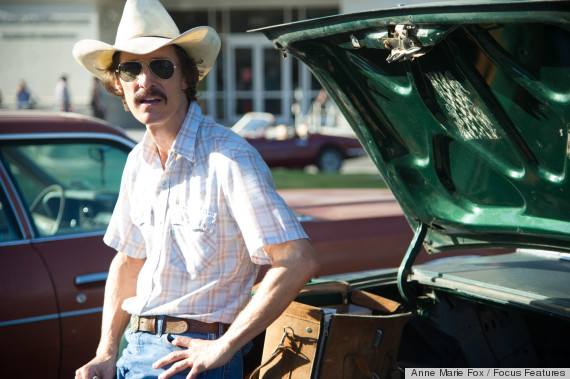 How were you able to pull off such a huge feat with just a $250 materials budget?

I have no idea how we were able to shoot the entire film with the $4.5 million dollar budget that we had. It's 100 percent the most under-budgeted film I've ever done. After looking back, scrounging around, and begging and pleading for supplies from people, then calling in favors and even using food products in the place of prostheses, I wouldn't have it any other way. I'm so glad that we had the money that we did because we wouldn't have got the realistic looks we were able to get. There's such raw, gritty detail to a lot of the makeup in the film.

We were looking at the pictures, and I said, normally I would use a prosthesis for this, but what can I substitute? It looked like grits and cornmeal on top of other makeup products. So I hand-painted underneath and then I applied a makeup-effects product to make the skin look taut, dry and wrinkly. As that dried, I pressed in grits and cornmeal to make a pustule rash. We first tested it on Matthew, and he loved it and was a big advocate for it. I thought it would be the end of my career.

What was the makeup process like transforming Matthew and Jared throughout the film?

Both Matthew and Jared came to us 40 pounds thinner than they normally are, so they were pretty darn skeletal to start with. But because we would shoot so out of sequence, we would have to change them back and forth from their sickest looks to their healthiest looks many times in a day. To do that, I used products that take the red out of the skin, and I used that all over their face and bodies to make them look pale. Then I started with a contour color, a dark makeup shade, and I contoured every bone that I could find in their face or every part of their body that was showing in the costume that they were wearing that day. As they got more sick and skeletal, I just continued that contouring process further by looking at photos and where I couldn't see the bones, I actually drew them in. Also, I drew tons of veins on their face and hands when they were at their final stages. I'd add highlight to the bones as well.

To make them look healthy, like they had gained 20 pounds, for Matthew I gave him a slight tan and I'd reverse highlighting and contouring. So everywhere I had gone in before to make them look skeletal and done the dark makeup underneath the bone and light makeup on top of the bone to make it protrude, I did the opposite. For Matthew, I also used dental plumper, these four little pieces that clip on his upper and lower teeth, and they have a bit of dental material that pushes cheeks out from the inside to make them look fuller.

My key makeup artist and I spent four and a half hours contouring every bone on their bodies for their scenes. She started on the back, I started on the front and we just went to town. 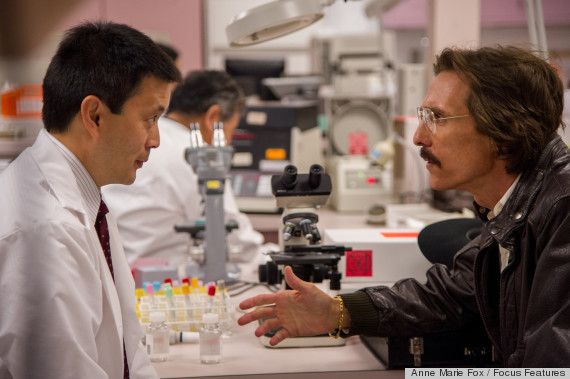 Why did you use tanning for Matthew's character, Ron Woodroof?

It was actually Matthew's idea and it wasn’t necessarily to make him look heavier, but healthier. He totally came up with it. Obviously it's the opposite of pale, but Matthew and Jared had so many levels of sickness to show the different stages of AIDS throughout. [For] one of the first levels of sickness for Matthew, when he showed up in the morning on set ... we didn’t do anything to him. He was super skinny and had stayed out of the sun for months, so he wasn’t anywhere as tan as he normally is. The next level would be to make him pale, so I’d start with the highlighting and contouring. But as a person, he realized he looked healthier when he had a bit of a tan, and it was his idea to add that back in.

I did it all by hand with a tanning product because, again, up to five times a day I'd have to change him back from his sickest look to his healthiest look. So anything I did had to be completely removable instantly.

Can you tell me about that bright pink lipstick Jared's character, Rayon, wore?

I adore that lip color myself and I can tell you it's a MAC color. That look is actually inspired from the '60s actress Jane Forth. There is a pretty famous photo of her where she almost has identical makeup on. That, of course, is when Rayon is her healthiest and heaviest. She's not quite the hot mess she ends up toward the end of the film.

I especially liked waxing off all her eyebrows and being able to do those fun looks where the eyeshadow comes up on the brow. I came up with the idea that Rayon would be influenced by her mother, the first female she probably had contact with in the beauty world. And Rayon would be influenced by actresses of the ‘60s because that's when her mom was in her heyday. So I choose Jane Forth, actress Brigitte Bardot, model Twiggy and there was also a shout out to Serena from “Bewitched.” Because this was set in 1985 and Rayon is a cool cat, she was also inspired by actresses and singers of the '80s. So there was also a nod to Dolly Parton and a Pat Benatar look as well. 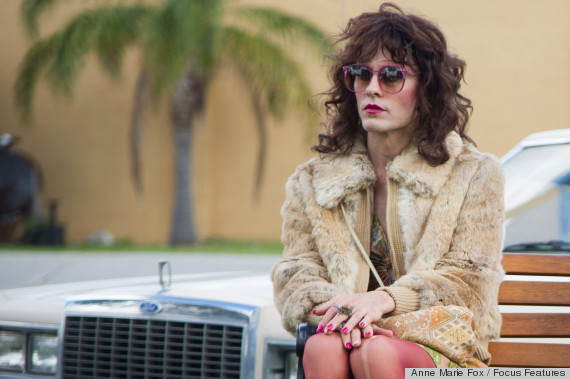 Were there any scenes in the film that were particularly emotional for you?

Absolutely. Watching the film after so many times, there were scenes where I just couldn't help but burst out crying -- two of them being when Rayon is looking at herself in the mirror right before she dies, and she's putting on makeup to try to cover up her lesions. She says, I'm going to be a pretty, pretty princess no matter what I do when I meet you. And then the scene in the hospital when she says, I don’t want to die.

Both Jared and Matthew were so into their characters ... they were their characters. With Matthew, there were times he was talking to [actress] Jennifer Garner's character about getting treatment and he actually got so scared that he started crying. And it's not in the script or the film.

They were very emotional times throughout shooting, but we shot so quickly that we didn’t have time to think about it. We just dealt with the emotions and kept shooting.