What is the legality behind the Trespassers Will Be Shot sign?: originally appeared on Quora: The best answer to any question. Ask a question, get a great answer. Learn from experts and access insider knowledge. You can follow Quora on Twitter, Facebook, and Google+. 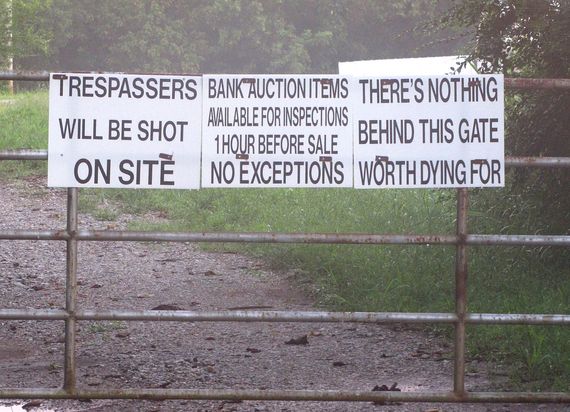 This question, to me, is more accurately broken down into three separate questions:

First off, with respect to your own property, so long as you haven't agreed to any limitations on the appearance of your home (such as through a Homeowners Association or deed restriction), you're free to put up any signs you want, regardless of how violent, offensive, or profane they may be to others. That's the First Amendment at work — it limits the government's ability to regulate speech — so yes, a sign threatening to shoot trespassers is perfectly legal. You may not be viewed as the most neighborly person in your community, but the government should not be able to punish you for such a sign, or force you to take it down.

Now, to the second question. Most people who put up "Trespassers Will Be Shot" signs are using them as a scare tactic to make sure that would-be criminals get the message that they're armed and they're not afraid to shoot. There's obviously the hope that a criminal sees the sign and decides that the home with the trigger happy owners isn't the one he wants to burgle. And again, that's perfectly legal. However, installing a sign doesn't give a property owner any special rights; a property owner isn't allowed to draw his or her weapon on a trespasser and shoot with impunity on the basis that the trespasser was somehow "warned" as to the consequences of trespassing. Conversely, an outsider who knowingly ignores the "Trespassers Will Be Shot" sign may be guilty of trespassing, but the trespasser does not assume the risk of being shot and thereby lose the right to take legal action if he or she takes a bullet for walking on someone else's grass. The bottom line here is that if a trespasser is shot by a property owner, the legality of the shooting will depend entirely on the facts of the shooting itself, and not on the existence or lack thereof of a "warning" sign.

Finally, the third question. The law regarding self-defense is going to vary from state to state, but generally speaking, deadly force may not be used in defense of property (property can be replaced, lives cannot), and the use of deadly force must be in response to reasonable fear of serious, imminent bodily harm to oneself or others. See expanded self-defense laws. Furthermore, there is also a distinction between "stand your ground" and "duty to retreat" jurisdictions; in the former category (nearly half of all states), an individual does not have to attempt to retreat before responding with deadly force where self-defense is justifiable. In a minority of states, the use of deadly force in self-defense is only permitted if an individual cannot safely avoid the risk of harm or death, such as by running away. And finally, there are a handful of states that are in between, imposing a duty of retreat in only certain circumstances.

But as a general matter, the key terms regarding self-defense are proportionality and reasonableness: the force you employ to defend yourself must be proportional to the threat presented, and the threat presented must reasonably be viewed as serious. For example, if a trespasser enters your property and is brandishing a shotgun, then yes, responding with deadly force may be justified depending on jurisdiction: the criminal has a gun, and a reasonable person would assume that he is likely to use it. If someone walks onto your driveway and attempts to take your car at knife point or kidnap your child, the use of deadly force may also be justified; again, there are serious weapons and serious risks presented. But there would be no serious risk presented by a group of Girl Scouts who walk onto your property and ring your doorbell, or even an intoxicated individual shouting angry nonsense while on your yard (while perhaps frightening, there's no immediate risk of harm to you), and therefore, responding with deadly force would be highly illegal in both cases, regardless of the sign(s) you've posted.

This answer is not a substitute for professional legal advice. This answer does not create an attorney-client relationship, nor is it a solicitation to offer legal advice. If you ignore this warning and convey confidential information in a private message or comment, there is no duty to keep that information confidential or forego representation adverse to your interests. Seek the advice of a licensed attorney in the appropriate jurisdiction before taking any action that may affect your rights. If you believe you have a claim against someone, consult an attorney immediately, otherwise there is a risk that the time allotted to bring your claim may expire. Quora users who provide responses to legal questions are intended third party beneficiaries with certain rights under Quora's Terms of Service.