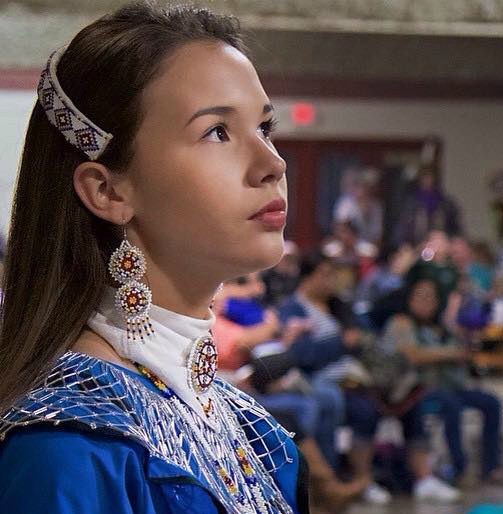 Bella Aiukli Cornell, a citizen of Choctaw Nation, participates in a pow-wow.
---------

"Get off the stage, squaw!"

Bella Cornell, a 14-year old girl from the Choctaw Nation, said she heard these words as she finished her testimony against the name and mascot of the McLoud High School Redskins during a mid-December school board meeting.

In the packed audience, her mother was distraught watching her daughter. "It was horrible to see," said Sarah Adams-Cornell, "It takes so much for one of our kids speak up. I wanted to take her out of there and protect her. She's my child."

A few weeks prior, Woodrow Wilson, McLoud High's Indian Education Director, had reached out to Adams-Cornell hoping she would be willing to testify to the school's board about Native mascots. Several local Native American families had privately voiced their concerns to him, with one family stating they no longer participated in school events because of references to "dumb, subhuman Redskins."

A vote on the mascot had been scheduled in a meeting open to the public, but the concerned local Native families didn't want to testify, fearing backlash and bullying against their children. "The Board wouldn't allow anonymous comments, you had to actually be present at the meeting to speak out," said Adams-Cornell.

Upon Wilson's invitation, Adams-Cornell made the trip from Oklahoma City to the small town of McLoud, Oklahoma. Her daughter, Bella, refused to be left out, "My mom raised me traditionally, I know how to treat sacred items, how to treat regalia. To see it used as a plaything is wrong. People aren't mascots."

Bella is no stranger to experiencing hostility and ignorance about Native Americans. When she was in 8thgrade, a history teacher gave an account of America's first peoples that left her stunned and in tears. "He called us vicious vermin and said we were cannibals. Other kids came up to me after and asked if I ate people."

"She came out to the car in tears," said Adams-Cornell, "I spoke with the Principal and then with the teacher. He stood by what he taught, the Principal said the school would 'keep an eye on it.'"

The Board vote was unanimous -- in a 3-0 vote, McLoud High School would remain the Redskins.

Adams-Cornell has kept in touch with the local Native families who wished to remain anonymous; they've now filed a complaint with the Department of Justice.

While the 23-year long legal battle between Native Americans and the NFL's Washington Redskins rages on, several public schools that share the moniker have dropped the name. Backlash against change has been widespread, with some alumni going so far as to run for school board positions vowing to bring back the name.

"It's strange to see someone who feels so entitled to give their perspective on something that doesn't negatively affect them or their children," said Adams-Cornell. "I saw one woman [at McLoud] say that giving her testimony supporting the name was the hardest thing she'd ever had to do. She's up there crying, when this actually hurts Native children."

Though she understands her mother's concerns after the meeting in McLoud, Bella says she will continue to fight. The Choctaw teen hosts a radio show dedicated to Native American youth advocacy. "If we give up, it tells them that they won. What happened to me is what happens when you allow racism."

*Note: This is a cross-post of an article that was originally published at Indian Country Today