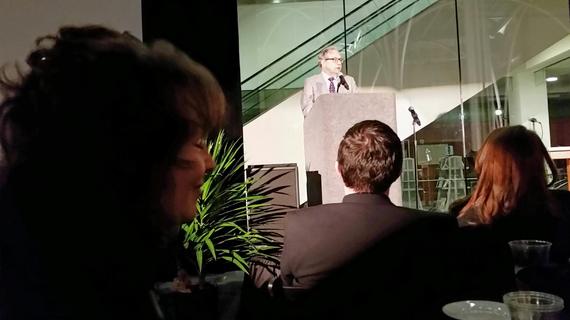 This brief post is nothing more than a hand-placed-over-heart thank you to the brilliant and brave gut spiller and truth speaker, Lewis Black, who from his very proper podium in the cavernous atrium of the Indianapolis Central Library let loose to an assemblage of supporters (aka they who [yes] got it, whether in agreement or not; such is the inevitable Hoosier mix), gathered to honor the legacy of Kurt Vonnegut and a night named for him, in support of the Indianapolis gem that is the Kurt Vonnegut Memorial Library.

In the way only great comics can, Lewis Black stepped up not only as 21st c. philosopher but also as one moved/inspired/freed by the great words and hyper-filtered thoughts of an American literary genius whose gift of phrase crafting is to this day, in my opinion, unparalleled. Kurt Vonnegut, who rendered gold from the mucky information and shit we all swim in, stands still as patron saint of intelligent dissenters and more importantly, as a voice for those good souls who dutifully trudge through life, well-meaning but oft misguided, who possess neither the chutzpah nor simple freedom to speak up and out, when basic survival on the oiled rungs of a capitalistic caste system keep them fully occupied with just barely holding on...

Lewis Black fought back tears, a few errant ones unsuccessfully, as he railed, hilariously and eloquently (as he is known to do), hitting pulpitized politicos and pointing out with equal zeal the hypocrisy of progressive, happy joy-joy idealism that exists, especially when it's entrenched in sexist, near infantile superficiality on both sides of the Atlantic. Black mused on things men need to acknowledge, what women need to realize as well; he poked fun at his own slavishness in the face of the schniek too. Whether or not anyone left a smidgeon more enlightened for having attended Night of Vonnegut, for having sat in the presence of a man so willing to spill his guts in what has to be an exhausting performance (it was that intense, that heartfelt), we as an audience were at least able to join in spirit and laugh together, to "get it" for his benefit and ours, and to be okay with both word -- and subject -- choice in a manner Vonnegut himself would have approved.

For reasons both logical and personal, there is so much I would love to write about, about which I won't pen a single word. I set certain limits (for now) not in regard for myself but for others; rest assured, I do it happily. But I promise to push a button or envelope here and there. In the meantime, I will pen these few words of thanks to Lewis Black for his fab rant at last night's event, and I likewise thank all comic kindred, from Jon Stewart to the newbies who nervously hone their wit and wisdom as local opening acts, as they collectively spew/present the universal and the personal -- and for the way they do it:

Humor is, I believe, a key component in mankind's salvation and basic survival. Comedy and laughter are not only verifiably good for us; I see them as the most delightful proof of our evolution.

Kudos, Julia Whitehead, executive director and founder of the KVML, and to all who help keep the doors open.

Photo of Kimann attending Night of Vonnegut by M Schultz, used with permission.