My own experience with the horror comics of the early fifties was itself uncanny; they disappeared from the market as soon as I was old enough to read them. But nothing more magical had been at work than the U.S. Senate, whose collaboration with publishers set up a Comics Code that essentially wrecked the comics medium by imposing self-censorship. The very words HORROR, TERROR, CRIME -- even WEIRD -- were banned from the titles of comics. The Senate hearing on April 21, 1954 suggests that the solons may have been more afraid of the comics than the kids were -- especially after they got a load of what these books had to say. Sometimes symbolically, sometimes with shocking directness, the comics could slip forbidden subjects, from war atrocities to child molestation, under the radar of official culture. But they were never just social commentary. For instance, the vampires who invade their adopted kid's room one night can't be reduced to child abusers who might appear on Dr. Phil today; rather, that story unmasks the abusers as vampires, restoring horror to its rightful place in the reader's imagination. Sleazy as they could be, then, the comics may have allowed their readers to recover some genuine inner experience in a society married to every type of denial.

More than fifty years later these vilified comics are revealed once again in all their eye-popping glory. In "The Horror! The Horror! Comic Books the Government Didn't Want You to Read!" (Abrams ComicArts), I uncover over two hundred pre-Code horror and crime comics of the 1950s. What follows is a gruesome sampling: nine comic books banned by Congress. Perhaps they were right.

PHOTO GALLERY
The horror!
Download
Calling all HuffPost superfans!
Sign up for membership to become a founding member and help shape HuffPost's next chapter
Join HuffPost 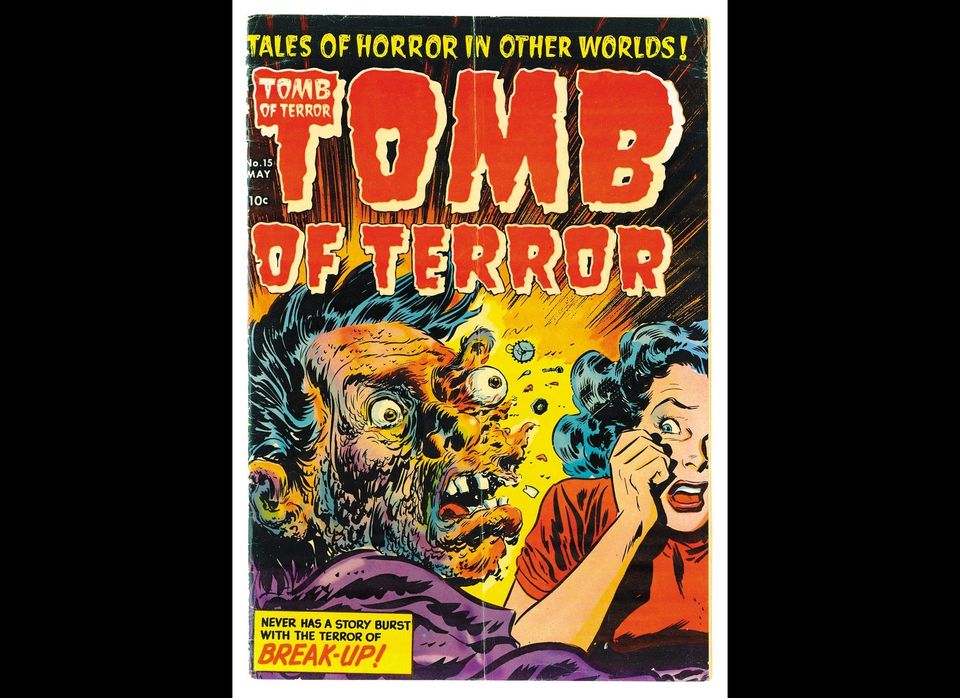 1 / 9
TOMB OF TERROR
<strong>TOMB OF TERROR no. 15, May 1954 <em>Art by Lee Elias, Harvey Publications, Inc. All rights reserved. </em></strong> As their nemesis Dr. Fredric Wertham correctly noted, fifties horror comics were obsessed with “injuries to the eye.” Of course, eyes were not always innocent and also caused harm. Some comic books even asserted that they themselves were Gorgons -- if you look upon their covers, you may be turned to stone, but you also may find that your own gaze has become murderous . . . or worse. Harvey Publications, who brought out The Tomb of Terror, would at times print “WE DARE YOU TO READ THIS!” on their covers, as if it would unhinge or blind you. For some reason, they skipped that disclaimer on this one.