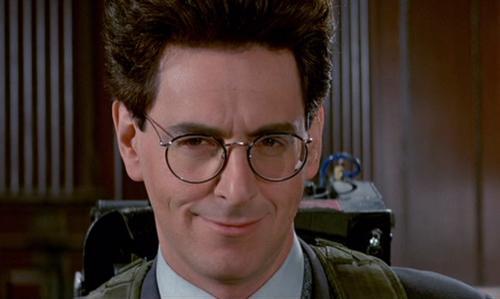 My first memory of Ghostbusters was on my family television set, with a massive top-loading VCR player we probably rented. My parents were away for the evening and I recall my older siblings having friends over to screen the comedy. They were stuck watching me, and in turn, their seven-year-old brother was able to watch movies our mom would not approve of.

Like A Nightmare on Elm Street around the same time, I was way too young to consume Ghostbusters. The opening scene in the library terrified me, and I continue to remember being freaked out about the decomposing cab driver ghost. I also recall rolling on the floor laughing, even at jokes I didn't understand. But the guy who got me laughing the most was Dr. Egon Spengler.

Of course as played by Harold Ramis, who passed away Monday at age 69, Egon was a quirky-looking dude who said the weirdest stuff. Yet I somehow always understood where he was coming from because I identified with him.

He was a bespectacled sciencey guy who made bizarre (yet prophetic) proclamations such as "Print is dead." He explained an apocalypse in terms of Twinkie dimensions and could sum up every molecule in the body exploding at the speed of light as "bad." He approached slime not as something to be grossed-out by, but as a scientific possibility. He also appreciated Art Deco. And while likable, and somewhat unaware of his likability, he was pretty darn awkward around people.

Sure, Venkman was the hero who had the best one-liners, but the mold, spore and fungus-collecting Egon was the smartest cat around who came up with the idea that defeated Gozer the Traveler.

In a time before the word "nerd" was a badge of honor, Egon made nerd cool. Venkman, Ray and Winston trusted him and he was a valued member of the team. A lot of '80s movies showed nerds as the butt of jokes seeking respect or revenge, but Egon already had that respect. He wasn't getting beat up; he was saving the world. Moreover, he seemed pretty relaxed just being himself - and managed to rock a proton pack at the same time.

As a quick aside, Egon and his teammates also made it intriguing to pursue the paranormal. It took some time to percolate, but without Ghostbusters, there would be no Ghost Hunters and the paranormal reality-TV it inspired. The fun gadgets, blue-collar ethic, logo, signature vehicle, "we're ready to believe you" motto and attempt to apply pseudoscience to the unexplained has all been adopted by paranormal nerds and black-shirt ghost hunting teams on TV and active across the country. Paranormal research existed long before Ramis and Dan Aykroyd wrote Ghostbusters, but the movie gave the pursuit a little more style.

For a boy who read a lot of sci-fi and comics (and was extremely interested in ghost stories and paranormal phenomena), and was also prone to saying odd stuff, this was all impactful stuff. It was nice to see a character on screen that people loved who embraced his weird. And my guess is Egon resonated with a lot of other kids out there as well. Thirty years after Ghostbusters was first released, the nerds of the 1980s have grown up and nerd culture is being chased after instead of chased away.

There is a lot to say about the life and career of Harold Ramis, and I love seeing it being said on Twitter, blogs and all over entertainment media. He was a legend; he had a funny, brilliant mind and Stripes, Groundhog Day, Vacation, Meatballs, Caddyshack, Animal House, SCTV all serve as quotable texts of my comedy education.

But right now, I choose to remember Harold Ramis as Egon Spengler, a scientist who busted ghosts, helped vanquish Gozer and planted a seed in a young kid that being a nerd can be pretty cool.

CORRECTION: This post incorrectly stated that Ghostbusters was rated 'R'. It is rated 'PG'.