Co-authored by Kurt Johnson (co-author of The Coming Interspiritual Age),
Rick Clugston (co-editor of Ethics, Spiritual Values and the New UN Development Agenda), Adam Bucko (co-author of Occupy Spirituality) and Mirabai Starr (author of God of Love: A Guide to the Heart of Judaism, Christianity and Islam)

Pope Francis' May 24, 2015 encyclical, Laudato Si, on the state of the earth's environment and humanity's responsibility for action, represents a growing transformational shift in the relationship between science, social justice, progressive secularism, and religious consciousness. Francis uses the encyclical to intelligently weave these various strands together, ultimately calling for a larger dialogue between all concerned groups regardless of religious affiliations or beliefs, in order to form common cause for a better world. Particularly moving are Francis' poignant references to the social justice implications of climate change and his pointing to the larger issues of social inequality, the plight of the poor and oppressed, the lifestyles of the wealthy and the values of consumer culture as all being inextricably entwined. He brings home the point that you cannot be working for one cause without working for systemic change on all of these fronts. 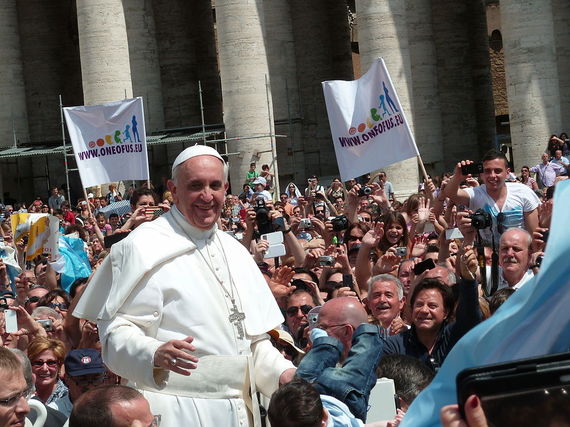 On the scientific front, a new book from Yale University Press/ Templeton's "Foundational Questions in Science" series, Does Altruism Exist? Culture, Genes and the Welfare of Others, by David Sloan Wilson, articulates a fascinating new paradigm from evolutionary biology that ties in with this broader transformational shift. In it, Wilson differentiates between natural selection for individuals and natural selection at what is called the "group", or "multi-level." While at an individual level, natural selection often operates in a selfish, survival-of-the-fittest fashion, at the group level (think of group dynamics within larger eco-systems), it selects for structures and processes that serve the well being of the whole, and not self-interest groups. In other words, evolution is trending toward a world that works for all. This is a radical reversal of standard evolutionary understanding, with grave consequences for how we function at the societal level in groups, including economically, politically, religiously, and so on. State these scientists, in the words of the author, and colleague E. O. Wilson (Harvard University's father of modern sociobiology), in the process of natural selection, "Altruistic groups beat selfish groups."

In other words, when it comes to group relations, nature prefers structures and processes that serve the whole, and not narrow self-interests. Then there is, as D. S. Wilson also says in his book, no mystery why our world is now sinking with its load of dysfunctional organizational principles.

If, in fact, nature is not only friendly to altruism, but prefers it, perhaps social idealists of all kinds--sacred and secular activists--are not swimming upstream in an uncaring and cruel evolutionary process, as the decades-long mantras of the selfish gene, Social Darwinism, and neo-liberal economics would have us believe. It also provides insight into the resistance to the Pope's Encyclical on "Care of our Common Home" from many traditional, conservative, and fundamentalist cultural, religious, and economic leaders and communities.

Echoed in these emergences, and the pushback against them, are the words of integral philosopher Ken Wilber in a presentation to a "From Self Care to Earth Care" Conference in Denver, Colorado in July. Warned Wilber, some 70% of the world's religions are still "stuck" at the "magic/ mythic/ literalist" level (or style) of religious practice, which is built on the ethos of "My worldview is right and yours is wrong." Unfortunately, the way such religious conflicts have played out historically, wrong also meant "dead wrong."

Yet, there is also, he said, a dynamic flux today between the tug of this and more modern, holistic, and world-centric cosmologies and worldviews. Indeed, first world statistics show a significant shift (in America from 20% generally, to 70% of "millennials") identifying as "spiritual but not religious" and some 90% identifying with tolerance and inter-cultural harmony. Science cannot be left out of this context either. As Wilber points out, our worldviews often stem from our cosmologies. Therefore, the fact that science too is in flux, depending on the cultural context, is heartening.

Sacred Activists have always found the conventional global stage an uphill climb, even from the time of that other Francis, Francis of Assisi. Yet, this Pope Francis will address both the United Nations and the United States Congress in September. The United Nations (attended this time by more heads of state than at any other time in history) will adopt a new development agenda for the world future and then move on "the Road to Paris" to the "World Climate Summit 2015" in December. Hopes are, and should stay, high.

We cannot help but note, from our above review of these highly convergent times, that this time several factors will be historically unique. The Encyclical "On Care for Our Common Home" will have been a direct response by religion to science, as well as a passionate call for collaborative dialogue and communicative action among disparate groups. Further, evolutionary science will be painting, for the first time in history, the view of an evolutionary process friendly to the actions of sacred and secular activism for real transformative change.

It is a far cry, perhaps, as David Sloan Wilson says in Does Altruism Exist?--a book whose scientific conclusions should buoy all activists--to think our globe's political and economic systems, still in the ethos of self-interest (if not greed, exploitation, or worse) will mend their ways. But it is resounding good news to all of good conscience, and the activists and altruists among them, to know that the evolutionary process itself may be solidly on their side, and that today there is a major convergence of civil society organizations to create a world that works for all.

Executive Director of the Foundation for New Monasticism, Author, Teacher