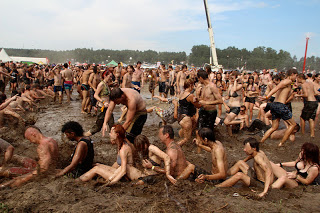 Back in the sixties the only way to get laid was to join a demonstration against the war. Life was actually quite simple with a clean demarcation between the love children and student protestors and the defenders of traditional values who still used expressions like family values and pre-marital sex. Of course there were those who couldn't even get laid in the aftermath of civil rights and war protests, but such unfortunates tended to be the exception rather than the rule. What was most liberating about the years following the war was the breakdown of this simple dichotomy. Sexual freedom was one of the few rights that was won by the student movement of the 60's, though it was deemed a pyrrhic victory in the mind in the mind of the Marxist philosopher Herbert Marcuse. In One-Dimensional Man, he coined the term "repressive desublimation," which, in a nutshell, means that once you get your rocks off you don't want to do anything but cuddle up and sleep in. Now of course we are free to be as right wing and warmongerish as we wish without sharing the fate of the men in Aristophanes' Lysistrata who were deprived of sex as a protest by women against war. In fact, love is not exactly free in the left wing camp today, where political correctness rules and a heightened awareness of role playing often inhibits the animal in man, or woman.