"You are going to die and I am the one who is going to kill you. I promise you this." This was a tweet sent to Slate.com journalist Amanda Hess.

Almost 50 percent of Americans under the age of 35 have been bullied, harassed, or threatened online, or know somebody who has, according to a new national poll published in the form of an infographic today exposing the ugly underbelly of social media. Women are targeted more often than men, and Facebook is by far the most common channel for such harassment.

My firm Rad Campaign, along with Lincoln Park Strategies and Craig Newmark of craigconnects, conducted this poll to learn about peoples' experiences with online harassment. To date, there has been very little data gathered about online harassment and its impact, even though the latest data shows that it affects 25 percent of all Americans. Among people under 35, that number shoots up to 47 percent. 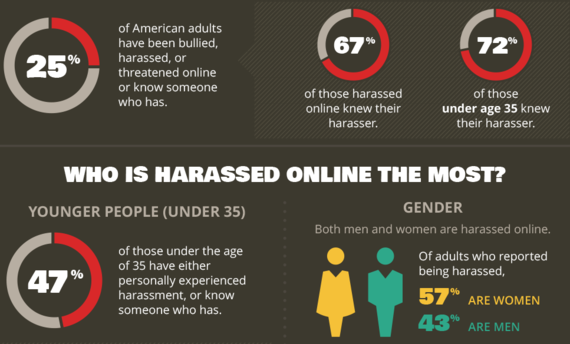 You may not be surprised to find out that women report being personally harassed overall much more often than men -- the gender gap is 57 percent women to 43 percent men across all age groups.

Sexual harassment is the most common form of harassment (44 percent of all incidences), followed by slurs on a person's professional ability (28 percent), then racial (23 percent), religious (18 percent), and political (16 percent) insults. What was really shocking, though, was that the percentage of women and men who reported experiencing sexual harassment was virtually identical.

A startling 62 percent of respondents who said they'd been harassed online said it happened on Facebook. Twitter came in a distant second at 24 percent.

More than two-thirds (67 percent) of those harassed online said they knew their harasser in real life. In the under-35 age group, that number rose to 72 percent.

Some people may think the Internet is a place where they can threaten people without consequences, but online harassment has horrifying real-life effects. The harassment was found to have very negative effects. Almost 30 percent of people who were harassed online said that they feared for their lives.

These poll results show the need for effective responses to the problem at all levels and across all platforms.

Unfortunately, people do not appear to respond to harassment enough by reporting it to the social network where it occurred. The poll shows that users reported harassment in only 25 percent of cases, yet the social networks themselves appear to be taking some sort of action -- in 61 percent of cases, according to the poll, the network shut down the offender's account.

But are the social networks taking action quickly enough? It took between 48 hours to 1 week for 47 percent of people who reported the online harassment to get a response from social networks, ISPs, law enforcement, etc. This could seem like an eternity to those who are scared for their lives.

So how do we create safer, healthier campaign spaces online? The biggest piece to address is the cultural aspects. Creating and sustaining a culture where people respect women, and people of different faiths, political beliefs, gender identities, and sexual orientations, etc. is going to take a long time. There are a lot of awful stereotypes that have impacted our culture that need to be dismantled.

However, there are more immediate steps that we can explore. The online gaming community has some practices that we can learn from. When League of Legend players faced online harassment, they had people from their 67 million monthly active gamer community voluntarily "police" it by reporting and addressing the harassment. People were able to issue email warnings and ban users. When staff audited the community warnings and bans, they found that 80 percent of the reports were credible, according to Laura Hudson who recently wrote about this for Wired.com. They also focused on working with the gamers who were censured or banned to get back into the game. Many said that they did not realize how offensive they were until another user pointed it out. Other online gaming communities have tested creating a code of conduct that people must agree to.

I'll be discussing more about the data and potential solutions to online harassment at a Personal Democracy Forum panel entitled "Sex, Lies, and the Internet" beginning at 2 p.m. ET on Thursday, June 5th. You can also find a detailed infographic on the report at http://www.OnlineHarassmentData.org.

Founder of Women Who Tech and Rad Campaign