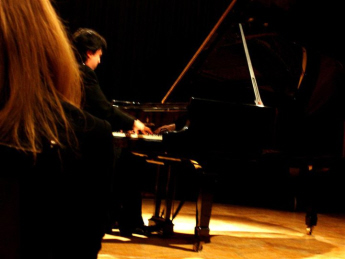 I came here to find a corner of the world where relationships, ideas, and beauty were more important than winning. I wanted a place where people sat down to dinner, where I could live and breathe while I collected myself. Maybe a dream, but...I remembered Budapest being that when I was here in the old days. People read, ate, and had animated discussions. The Hungarians I met knew more about American lit than I did. They wanted to discuss Dos Passos. I had to run for a crib course.

My friends, who teach everywhere, say students are increasingly ignorant, dangerously illiterate, and terminally apathetic. They have little love of learning or intellectual curiosity. Even the best universities have become fancy vocational schools. Relationships have become mercantile and transactional. I don't know what's so damned important, but most people seem more interested in talking to whomever is not in the room, than the person they're with.

It's changing here too. People check their cell phones in restaurants. Students no longer care about Dos Passos, they just want the answers to pass the tests so they can get a good corporate job. Corruption is rampant, on both Right and Left. Huge sums of money have disappeared from the EU in the hands of the Hungarian Socialist government. The http://www.huffingtonpost.com/2010/04/11/hungary-elections-fidesz_n_533412.html" target="_hplink">Right-wing victory of Sunday's election could move things in the direction of a http://http://www.huffingtonpost.com/tag/jobbik. " target="_hplink">rising fascism.

My friend, Berne, blames Dallas. She says everyone was sure a market economy would magically produce the lifestyle they envied on that popular TV soap opera that ran from 1978-1991, the years preceding and just after the end of the Russian occupation. Such things as homelessness and medical indigency were incomprehensible to Hungarians then. They reasoned: the Communists were liars; ergo everything they said must be a lie. Since they said there was homelessness in America, it must be a lie. Ergo all people must live like Dallas. Now they're angry because they figure they got gypped.

I blame fast food. I believe the ritual of breaking bread together makes us human. When we stop doing that, as far as I'm concerned, all bets are off. I have real questions about whether the whole enterprise of Western Civilization as we know it isn't going down the tubes, while everyone runs faster to stay in place and no one has time for dinner at all.

But last night the world stopped.

Call it a moment of grace. I was invited, courtesy of my friendly not quite native guide, to a musical evening of the kind I imagine they had a hundred years ago, in the days of the Austro Hungarian Empire. I donned my requisite LBD and took the trolley five stops. Miraculously waiting on the platform, as planned, was my friend. We crossed over to the Metro and took that several more stops, where we got off in a neighborhood with large houses and trees. We walked several more blocks to arrive at an old brick official building of some sort. The guard directed us up the stairs, where little bags of favors and programs awaited us, courtesy of our hostess, Olivia, a well-dressed, animated and prominent Filipina. She ushered us into a room with high ceilings and chandeliers, about 100 red velvet covered chairs, and stained glass windows. In front was a raised wooden platform surrounded by gold satin curtains, on which stood a Steinway grand. She seated us in the English speaking section, where I found myself next to another charming Filipina ex-pat IT executive, transplanted from the Netherlands, chatting with a younger lithe Hungarian blonde who turned out to be the Mistress of Ceremonies. It was a fine mix of age and nationality, though probably not of class.

Soon the speeches and introductions began, except for one "Ladies and Gentlemen," all in Hungarian. I didn't mind. I was taking it all in. Soon enough, an intense young man appeared in a black formal suit, under which he wore a deep red brocaded vest. He sat down at the piano and began the recital.

It doesn't happen many times in ones life -- maybe a couple dozen, if you're lucky. It happens more often in travel, I think, because we are paying closer attention. It happened once driving across Mt. Olympus, and another time when I heard Neruda recited between sets of Bolero music in a Cuban nightclub. It happened again last night. Twenty-one-year-old Balazs Janos transported me into the eternal. 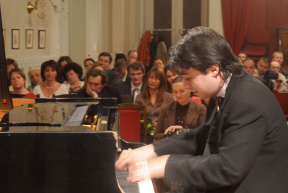 I am not a connoisseur of classical music. I can't tell you whether this young man's playing was technically perfect. What I can tell you is that I have never heard an American play piano quite like that. He ran through a repertoire of Chopin and Liszt, both Eastern European composers. As he warmed up, his hands became more agile. His dark curls fell damply onto his forehead. His confidence and gusto, as well as his dynamic range, grew. His flourishes became more extravagant. By the time he played his finale, Liszt's "Hungarian Rhapsody," I was undone. I was hearing this music for the first time in the spirit in which it was written. It was bold, maybe even arrogant, wild, elegant, and deeply passionate. It was one of those moments when time stands still. We transcend the particulars. We are stripped of our little aches and pains, and there we are--face to face with Beauty. If the trip ended right then, it would have been worth it. For one exquisite moment, I got to hear a beautiful young man in a red damask vest play "The Hungarian Rhapsody" in Budapest. It was worth everything!