A picky plant found in West Africa may grow only on top of mineral deposits often loaded with diamonds, according to research soon to be published in the journal Economic Geology. Stephen Haggerty, a professor at Florida International University in Miami and the chief exploration officer of Youssef Diamond Mining Company, said the discovery could be a game changer for the region.

The thorny plant, Pandanus candelabrum, only grows atop deposits of kimberlite, a type of volcanic rock found in giant underground "columns" around the world. Diamonds, formed hundreds of kilometers deep by intense heat and pressure, are pushed upward with the kimberlite during subterranean volcanic activity, resulting in gem-rich veins of rock. 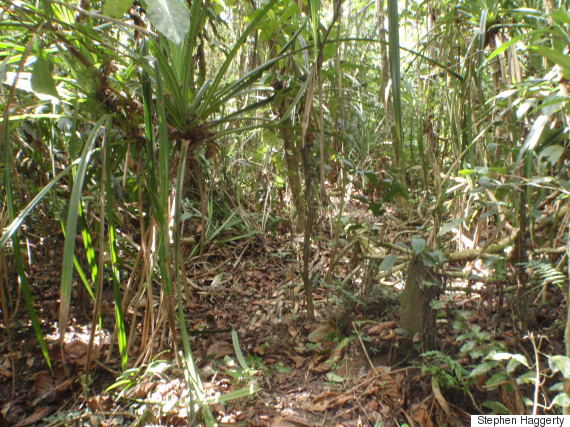 Pandanus candelabrum, left, is seen in the Liberian jungle.

Until recently, there was no reliable way to locate these concentrated deposits of diamonds, which can be just a few acres in size and buried in thick, remote parts of the jungle.

Haggerty made the discovery in the bush of Liberia after venturing to the country in 2010 to continue research he began in the 1970s. He told The Huffington Post that Liberia, infamous for its trade in so-called "blood diamonds," had extensive mining operations in place, but the miners had no real way of knowing where to look for the gems. The region is covered in dense forest "so inaccessible, you can't see more than 10 feet in front of you," he said.

Moving through the jungle and taking soil samples with an 8-foot steel rod, Haggerty eventually discovered a kimberlite "pipe" about 500 by 50 meters, or 1640 by 164 feet. Four diamonds, two of them around 20 carats apiece, have already been found in the soil above the pipe, according to Science magazine.

Aside from the pipe itself, Haggerty's most interesting observation was the discovery of Pandanus candelabrum, which thrives on a unique mixture of minerals found in the kimberlite soil. "For reasons that we don't yet know," he said, P. candelabrum appears to grow only atop these diamond-rich deposits.

Various plants have been used as discovery elements for other metal-laden soils, Haggerty said. Scientists uncovered some eucalyptus trees in 2013 that contained gold in their leaves, having tapped into mineral deposits deep underground with their far-reaching roots.

Haggerty said he hopes to use satellite mapping of the plants (via their spectral signatures) to help unearth new pipes of kimberlite throughout Liberia.

"That's the way geology works. We don't operate in singularities," Haggerty said. "If there's one pipe, there have to be others."

Still, not all kimberlite deposits contain diamonds -- in fact, only about 1 percent of the world's known kimberlite pipes "are rich enough in quality diamonds to be worth mining," writes Eric Hand at Science.

But if the mapping goes as hoped, it could pave the way for new diamond exploration in the country that could help boost local economies without harming the environment. Whereas a lot of current diamond mining involves unearthing and discarding all kinds of substances, some of them terrible for the environment, the main by-product of mining at kimberlite sites would be the kimberlite itself -- which is basically composed of the same nutrients as garden fertilizer. In a country still battling Ebola and malaria, Haggerty said, that could be a saving grace.

"That's what Liberia needs, and that's what West Africa needs," he said.