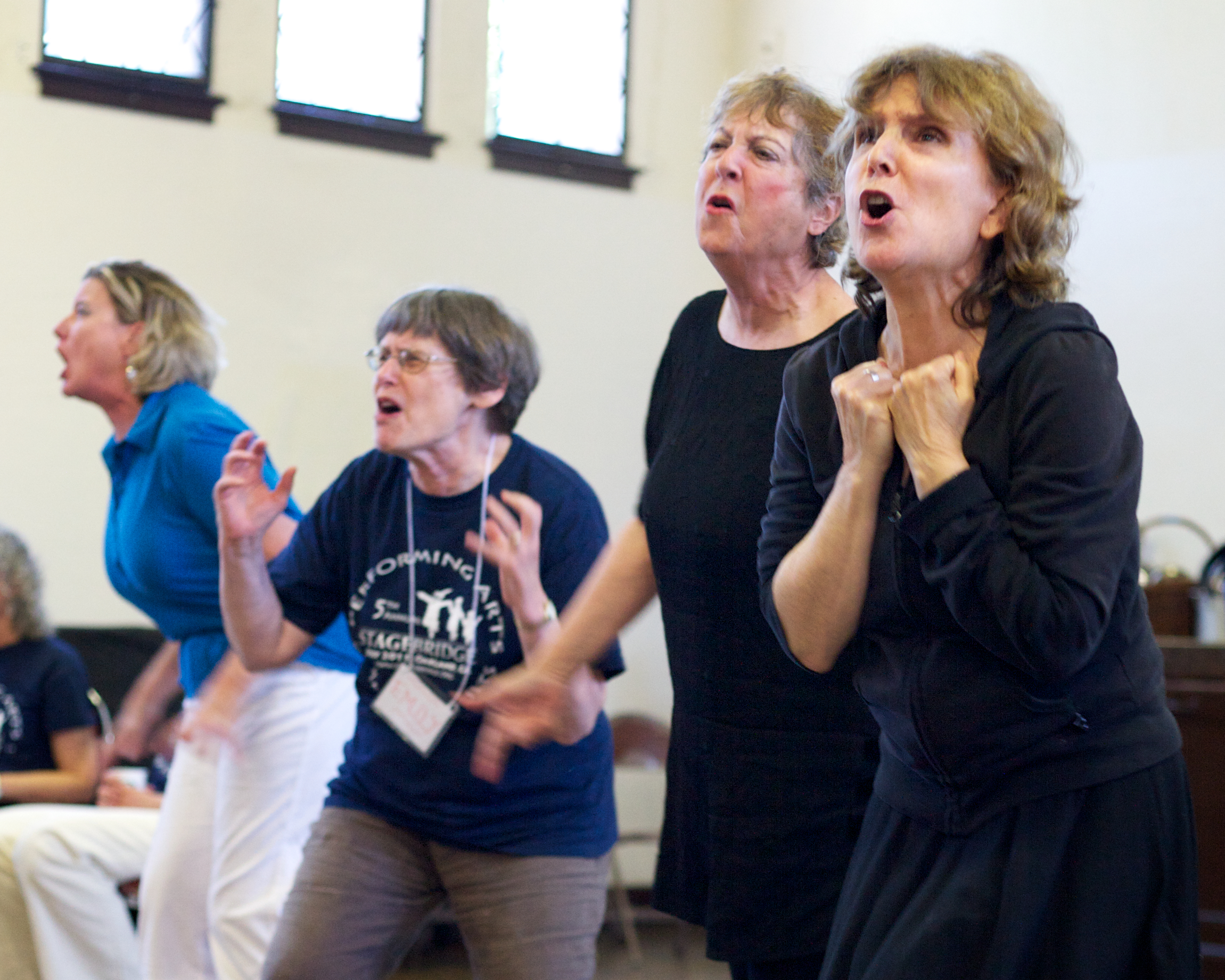 I sat in on an improv class that shattered a bunch of age biases lurking in my unconscious. Eight seemingly docile women looking to be in their late-50s to mid-70s sat in a semicircle. My first thought was that they could easily be mistaken for bridge or mahjong players waiting for a game to begin, or early-bird diners waiting for a table. What happened next amazed me!

The teacher/director invited three of the class members to come forward and produce a scene spontaneously, using subject matter created randomly by the class. Not only was the challenge to make up lines about "guests," but also to put the words to music played by a piano accompanist who came up with a tune on the spot.

What an astonishing, spunky, feisty performance! Quick thinking, a great sense of humor and just the right body language created a hilarious dialogue that ended in a three-part harmony. Who are these people I wondered, and how did they get to be such polished performers?

According to founder Stuart Kandell, Ph.D. they're members of a class, selected by audition, at the StageBridge Senior Theater that performs at schools and other community based events near San Francisco. In existence for 35 years, StageBridge is the oldest senior theater company in the U.S.

Although senior theater may sound like a new idea to you, it has grown remarkably. About a decade ago there were only 79 such companies in the U.S. according to Bonnie Vorenberg, president of Art Age: Senior Theatre Resource Center in Portland, Oregon. But today there are 791 theater companies! This growth is probably connected with boomers' interests, and demands for roles that work for them along with the infrastructure necessary to teach theater arts to this demographic.

The first week of fall classes had just begun at StageBridge and on the day that Director Kandell invited me to visit, there were eight different offerings. I saw everything from two levels of tap dancing to a "Vaudeville Workshop," a "Jazz & Broadway Harmony Chorus," and "Storytelling (Advanced)." Then there was the very entertaining improvisation class I attended, called "Antic Witties."

We later sat down to talk about the meaning of this theater community and the role it plays in the lives of participants. "For a good portion of the people this is a family, particularly for those who've been involved for years. They come to depend on each other for support... They become an intentional community. It's also a place where at the end of lives, people can have the time of their lives."

Stuart also made the point that "like any ensemble art form, there's a reason to get up in the morning, even when you're not feeling well, people depend on you and there are no understudies." It makes you feel important and needed, critical to feeling good as we shed the earlier responsibilities in life.

Asking him "what's special about the arts?" he replied, "As we grow older we have less opportunities to reach an audience, work may be gone, and our friends may have already heard our stories. That happens with our storytellers when they go into schools, also on stage, where the audience is alive and awake, responding and applauding."

"Audrey started here when she was 60. I went to her 60th birthday party and I went to her 92nd birthday party. Thirty-two years, a third of her life on stage... She started to take classes, got bitten by the bug of performing in plays for children. The last five or so years she was having trouble memorizing so she started to do improv and she was fantastic! We need to have role models for growing old that fit who we are, that we can relate to, it's critical."

Focusing on the respect that is due to these Vintage Years actors, "It's important that the bar we set is not down but at the right place. This is not a recreation center. This is a center for the performing arts. The quality of instruction is very important and it shouldn't be dumbed down."

We went on to discuss the paucity of roles for older women as compared to men. "As the baby boomers are pushing the envelope," Stuart exclaimed, "they won't tolerate it." It made me think about an actor friend of mine who recently landed a part in a San Francisco play. At age 70 she's youthful looking, with multiple talents including singing and humor, both required for the role. Still, age bias almost deprived her of the part. Fast-forwarding to the story's end, I attended a performance of the play, loved it and laughed at the comical lines until my sides hurt.

The whole experience got me thinking about what actors face when they are chronologically past 50 -- pros and amateurs alike. Bonnie Vorenberg's organization is a national clearing house for older artists, playwrights who create for mature actors and audiences, and directories of senior theater groups who perform throughout the U.S. and Europe.

With a ten-fold increase in theater companies in the past decade, this burgeoning art form warms the heart of senior thespians because it signals the availability of a theater opportunity near you. Bonnie said that theater is "a composite art that uses all the senses," made up of story telling, dance, music, set design and script writing, so it really fits my definition of an art form that stimulates the brain.

This is all good as more senior theater means more opportunities for writers to create "age appropriate" roles, and for more actors to comfortably perform them. It also means that even when memorizing lines is no longer an option, "reader's theater," just as the name implies, offers a satisfying alternative.

Though I've never tried acting I think I'll add it to my bucket list!