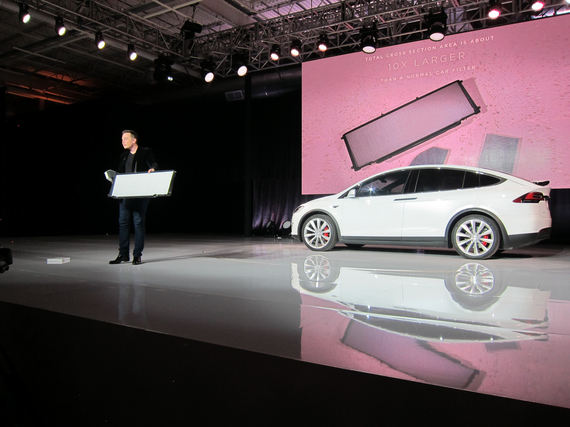 Last night, the long awaited Tesla Model X was launched and Elon Musk took great pleasure in underlining its clean air qualities. He couldn't contain a smile, as he talked about air quality and referred to "recent events," i.e. the VW DieselGate scandal.

Musk showed off the SUV's giant air filter (10 times the size of a typical one) and said:

Recent events have illustrated the importance of air safety...(in the Model X) you can have air quality levels comparable to a hospital operating room.

Musk then got somber, put on his superhero hat and showed the massive crowd estimates of how air quality can reduce life expectancy in some of the world's most polluted cities: Beijing, 22 months, Los Angeles, eight months and Paris, seven months.

But the biggest cheer of all came when Musk made this surprise announcement:

If there's ever an apocalyptic scenario, you just press the bio-weapon defence button -- this is a real button.

Who else is going to think in that magnitude with something as normal as an air filter? These are the kinds of things that Elon pushes to the limit and delivers products that no one else can deliver. The reason he's doing it is to save the planet. It's all about the survival of this planet and the atmosphere.

After a thorough tour of the Model X features, including the elegant falcon wings, Elon delivered keys to some of the first Model X buyers. This time round, Elon beat his friend, and first Model S owner, Steve Jurvetson and got the number one Tesla Model X. There's definitely admiration, perhaps a little envy, captured in my photo here.