For as long as I can remember, Thanksgiving has been my favorite holiday. Even as a child, with the prospect (and visions) of sugar plums and bundles of wrapped Christmas presents dancing in my imagination, it was our annual family gathering, a food-a-palooza in November that claimed the preeminent spot in my holiday heart.

Thanksgiving was the time when I knew I'd see my cousins and aunts and uncles, when we'd play and laugh and catch up on family news, when my father and my Uncle Frank would out-snore each other on the couch after the meal in front of a football game, when we were together, when we gave thanks.

Now as an adult and a parent, it is that last part -- giving thanks -- which I look forward to most when the fourth Thursday in November approaches.

It has become one of the most spiritual, contemplative moments of my year, when I intentionally take stock of the year that's passed and all of the blessings God has showered on the world, my family, and the people I love. 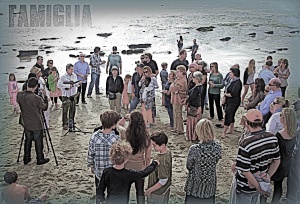 One of those people is my cousin, Nell, who got a jump on Thanksgiving's sacrament of gratitude earlier this month on Facebook, where each day she posted a status update saying what she was thankful for. Her list has included the quotidian and the profound (sometimes simultaneously). A morning hug from her daughter, Mary. The humor and constant ribbing of one old friend, for the kindness of another. Seeing the sonogram of her sister's first child.

Perhaps my favorite entry from Nell's litany of thanks appeared this morning: "Today I am thankful for the unexpected."

When I reflect on the events of the last year, it is precisely that -- the epic blessing of the unexpected -- that fills my soul with gratitude.

To me, "unexpected" is at the heart of how I understand grace. It is the unearnable gift, the divine reversal and sacred surprise, the still small voice that drowns out the din of the maddening crowd, the little bit extra that my Cajun friends call lagniappe, the very thing we "deserve" the least but get anyway. From God. From the One who created the world and the audacious, indescribable power of love.

Taking a cue from Nell, here are just a few of the unexpected blessings I am grateful for today:

For God's fingerprints that cover every inch of our world, seen and unseen. And for the moments where I can almost make out the holy whirls imprinted in the sky, the ocean, the sunlight, and on the faces and stories of each of us.

For my family. We are multigenerational, multi-racial, and international, a blended, motley, unabashedly loving tribe of blood and chosen relatives whom God has woven together in ways that daily amaze and delight me.

For my son, Vasco, the greatest surprise of my life and the joy of my world. This is Vasco's third Thanksgiving as a member of our family. Each time I look at the photographs I snapped of him when we first met -- by accident, if you believe in such things -- by the side of a dusty road in Malawi, I am overcome, thoroughly pole-axed by God's love and mercy.

For glimpses of grace and the profound blessing of witnessing life come full circle. Recently, God brought people back into my life from my college days -- anam cara or "soul friends," true companions who walk with, support, challenge, delight and care for me in ways I could never have imagined, planned for or anticipated even a few years ago. They are now my neighbors, my siblings and co-conspirators, my child's godparents, my confidantes. Mi famiglia.

For the generosity and selflessness I see so vividly -- all around me, all the time -- even in these lean, nervous days. I saw it in Zuccotti Park, where strangers prepared and served food to other strangers. I saw it in the sober faces and strong arms of the men who helped 84-year-old Dorli Rainey to safety after she was pepper-sprayed at an Occupy rally in Seattle. I heard it in the prayers lifted at the White House, at North Park University in Chicago, and in the basement of a church in Spanish Harlem where kind, mighty souls formed Human Circles of Protection last week and stood in solidarity with the poor, the vulnerable, and the least of those among us.

I watched it on display at border crossings, immigration rallies, refugee camps in the Horn of Africa, and at a glass blower's studio in my hometown of Laguna Beach where strangers arrived with shovels and wheelbarrows to help dig out an artist and his artwork from the muddy ravages of a flash flood. I saw it in the fresh coat of paint on the front steps of my elderly parents' home in Connecticut that my cousins had applied for them with great care and kindness when my brother and I couldn't be there to do it.

For hope and courage. Among the rescue workers who snatched earthquake victims from the jaws of death in Japan, in the tent cities of Port-au-Prince, in the faces of the Sojourners interns, in the linked arms of University of California at Davis students peacefully and bravely staring down the wrong end of a can of police pepper spray, in Gabby Gifford's smile, in Archbishop Desmond Tutu's dancing feet at his 80th birthday celebration in South Africa, in the unshakable witness of Billy Graham's calm and mighty soul, in 92-year-old Pete Seeger's voice as he led hundreds of young Occupiers in singing "We Shall Overcome" at a protest in New York City.

For joy. In the voice of Jim Wallis' eight-year-old son, Jack, as he proudly stood in the kitchen and read his campaign speech for student council. In the faces of thousands of concertgoers at Angels Stadium in Anaheim, California, as they sang along in unison as U2 performed "One" in a high-tech cathedral above home base. In Vasco's strong, fearless paddling on a surf board twice his height to catch a wave in the Pacific. In my step-son, Dan's, hands as he sheltered his newborn daughter's eyes from the sun, and in my new stepdaughter-in-law Katie's eyes as she kissed her husband on the altar of a barn in Colorado as a herd of buffalo grazed in the distance.

For simple pleasures. The lizard outside my office door lazing in the afternoon sunlight. A mug of strong fair-trade coffee. Listening to my son and husband laugh while they watch an old episode of The Three Stooges. A pastor I respect and adore who wears flip-flops to church and says, "Oh look, the fam!" when he runs into us in the bread aisle at Ralph's. Fresh figs. Eight hours of sleep. Jeff Buckley's rendition of "Hallelujah." Dragonflies. Leisurely conversations with my best friend at her kitchen counter. Text messages from my son that say, "I love you, Mom."

There is so much to be grateful for -- the grand and the mundane, the intimate and the global, the sacred and the supposedly secular. Blessings surround us on all sides. We just need to open our eyes and see them, name them, and say thank you.

So today, won't you join me in gratitude for life?

Image: the author's family gathered for her son's baptism in Laguna Beach.

Cathleen Falsani is Web Editor and Director of New Media for Sojourners. She is the author of several books, including The Dude Abides: The Gospel According to the Coen Brothers [6] and her new release, BELIEBER!: Fame, Faith and the Heart of Justin Bieber [7]. Follow Cathleen on Twitter @godgrrl.