By Will Levith, Condé Nast Traveler

Here are the 10 most exotic filming locations Indiana Jones movie director Steven Spielberg shot at that you can still visit today. 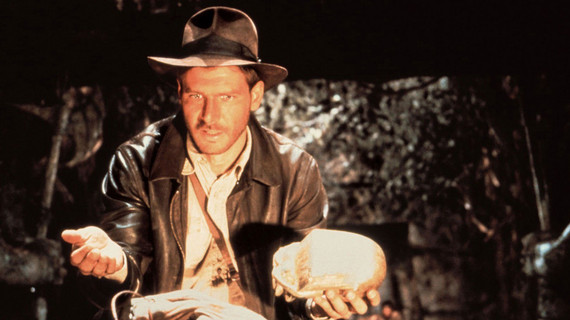 Harrison Ford has portrayed many famous movie characters, but perhaps the most iconic is Indiana Jones. Ford expertly molded the ruggedly handsome (and ophidiophobic) character who starred in Raiders of the Lost Ark (1981), The Temple of Doom (1984), The Last Crusade (1989), and The Kingdom of the Crystal Skull (2008). With rumors that Chris Pratt (Parks and Recreation, Guardians of the Galaxy) is being groomed as Ford's replacement in a reboot, we're taking a look at the original series' most exotic filming locations, which you can still travel to today.

Those iconic jungle-treasure-hunting scenes in Raiders of the Lost Ark were supposed to be taking place in the wilds of Peru. They were actually shot on the island of Kauai, Hawaii, with the famed rolling-boulder scene shot in and around the Huleia National Wildlife Refuge. 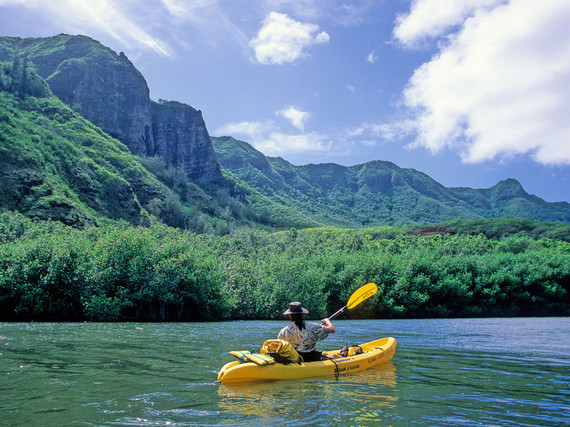 If you were tricked into believing that the snake hating and Nazi face melting in Raiders took place in Egypt, the film crew did their job well: Those scenes were actually shot in the desert landscapes of Tunisia, with the showdown between Indy and the Nazis taking place near Sidi Bouhlel canyon, just outside Tozeur. (Fun fact: The Star Wars series has also used Tozeur as a locale.) 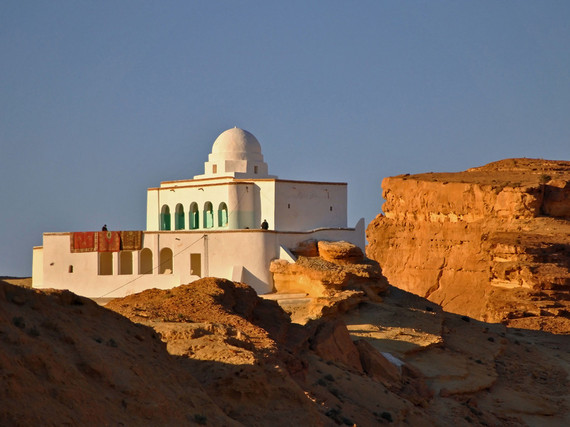 Director Steven Spielberg tore this next location directly from the history books. The port of La Pallice in La Rochelle, France, was used by the Nazis during World War II as a U-boat base, so Spielberg cast the real-life location as just that in Raiders. Those eerie, hulking, concrete U-boat "pens" are still visible from the port but no longer in use. 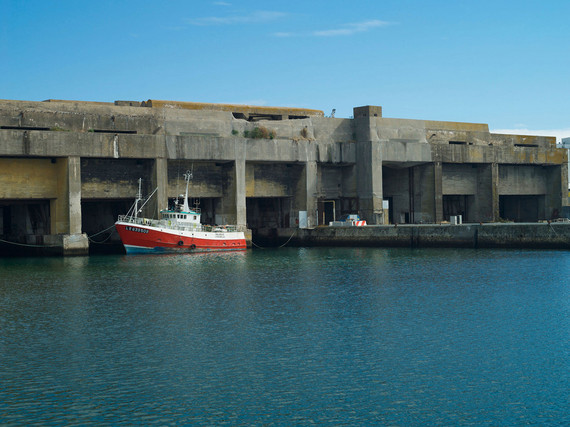 When Indy faces adversity, he gets creative; that's also what director Steven Spielberg and his crew did with the rope-bridge scene at the climactic ending of Temple of Doom. Unable to film on location in north India, where they had originally wanted to, they ended up shooting many scenes, including this one, near Kandy, Sri Lanka. 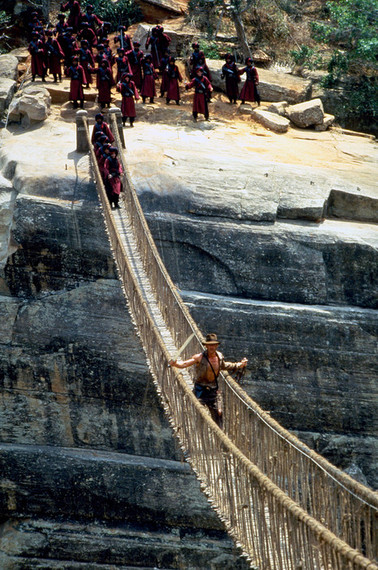 The bustling, cosmopolitan streets of Shanghai, China, in the 1930s must've been a sight to behold -- and one that Temple of Doom director Steven Spielberg was unable to fully capture in the Chinese city. Instead, Macau's Avenida de Almeida Ribeiro stood in for the street scenes in 1935 Shanghai. 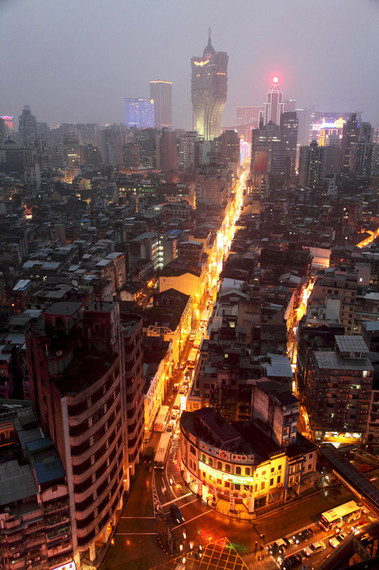 Remember the harrowing raft sequence in Temple of Doom? Indy, Willie (Kate Capshaw), and Short Round (Jonathan Ke Quan) first slide down a snowy mountain face, then careen over a cliff into rapids. The latter scene was shot in the white waters of the Tuolumne River, parts of which flow directly through Yosemite National Park in California. 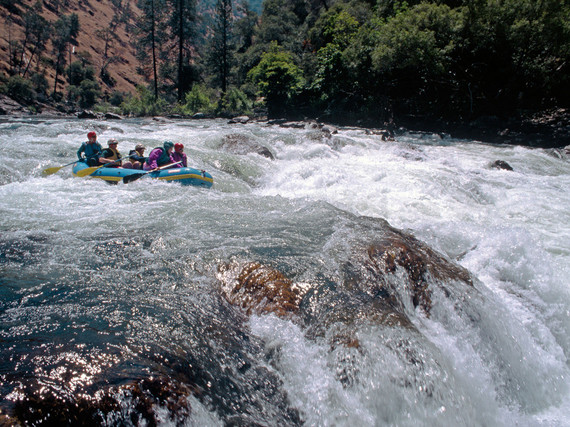 In The Last Crusade, Indiana Jones is after the Holy Grail, and what better place to "house" it than a real-life place called "The Treasury"? That's the popular tourist attraction al Khazneh, in Petra, Jordan, a giant, ornately carved sandstone temple facade that dates back to the first century A.D. 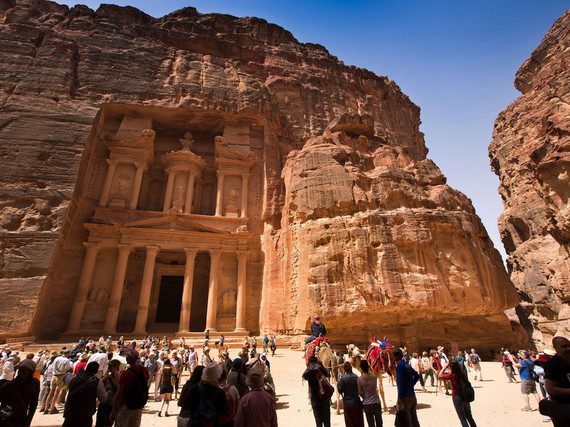 With an airplane in hostile pursuit, Indy and his father, played by Sean Connery, are forced out in the open on a sandy beach in The Last Crusade. But the elder Jones' quick thinking (and umbrella) downs the agitating bird. The entire sequence was filmed on Monsul Beach in the province of Almería in Andalucía, Spain, in Cabo de Gata-Níjar Natural Park. 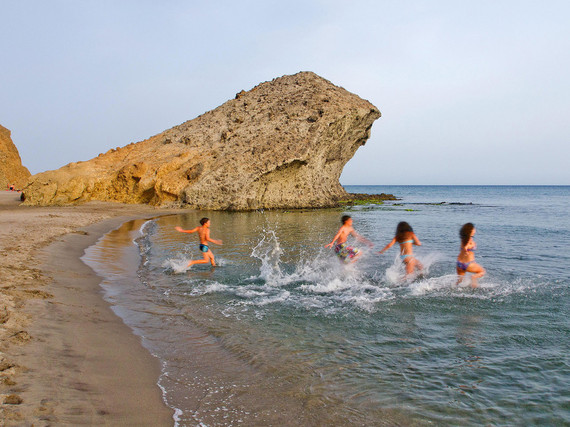 One of the most breathtaking vistas in the latest Indiana Jones movie, Kingdom of the Crystal Skull, comes courtesy of Iguazu Falls, which visitors can marvel at from three separate countries: Argentina, Paraguay, and Brazil. (If you're willing to get a little wet from the spray, it's an unforgettable adventure.) 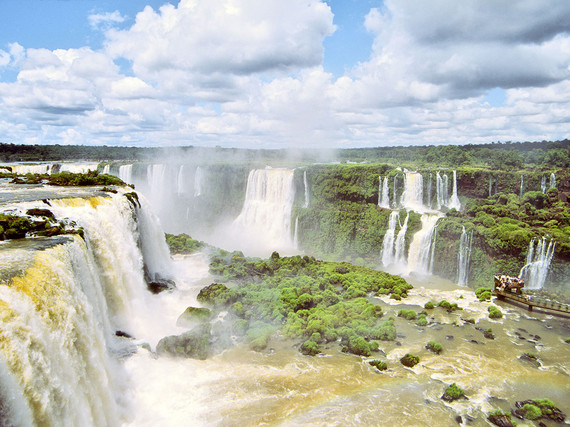 Standing in for 1950s Nevada in Kingdom of the Crystal Skull is the similarly desolate Abiquiu, New Mexico, where director Steven Spielberg shot scenes on location at Ghost Ranch, an educational retreat in the area. The ranch might be best known as a one-time stomping ground for artist Georgia O'Keeffe. 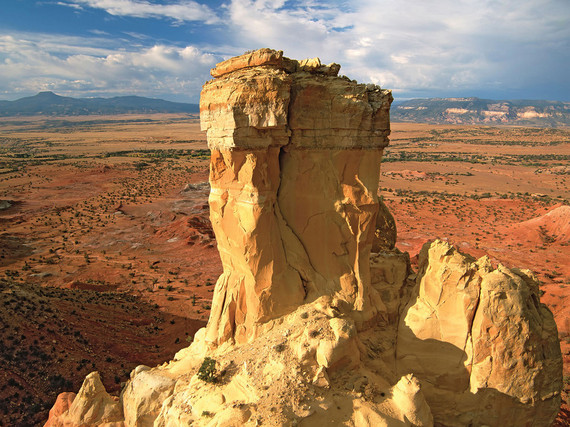