As the sprawling campus of the Jawaharlal Nehru University in the national capital continued to simmer, a student who was present at the Feb 9 meeting called to protest the hanging of terror mastermind Afzal Guru, recounted the sequence of events that led to the arrest of students' union president Kanhaiya Kumar and subsequently snowballed into a huge state-vs-students tug of war.

"I am a JNU student studying right now and also happen to be a witness from distance for some events that happened on that controversial date - 9th February 2016. So, that kinda renders me more legitimate to answer this question than people who only know about it through Zee News and Times Now," JNU student Harshit Agarwal wrote in response to a Quora question on the issue.

His answer has been viewed over 17,000 times and has been shared by former Union Minister Shashi Tharoor on social platforms, among others.

The ABVP members started threatening and intimidating the students and organizers.


"On 9th February 2016, ex-members of a student organization DSU, short for 'Democratic Students Union' had called for a cultural meeting of a protest against what they called 'the judicial killing of Afzal Guru and Maqbool Bhat' and in solidarity with 'the struggle of Kashmiri people for their democratic right to self-determination.' A lot of Kashmiri students from inside and outside the campus were to attend the event. 'Democratic Students Union(DSU)' is an ultra-leftist group in the campus that believes in the ideology of Maoism. It's a very small group of very well read students. They are not terrorists or naxals by any means. I have been in the campus for more than 2 years and never have I witnessed or heard of them committing a terror activity as much as of throwing a stone, let alone overthrowing the state," Agarwal wrote.

Twenty minutes before the meeting was going to start, the Akhil Bharatiya Vidhyarthi Parishad, a right-wing all-India students' organisation, reached out to the administration asking it to withdraw the permission of the meeting as it was "harmful for the campus' atmosphere". The administration acquiesced fearing clashes. DSU then asked JNUSU (Jawaharlal Nehru Students' Union) and other leftist student organizations such as the SFI (Students Federation of India), and AISA (All India Students Association) to help them hold their meeting "democratically and peacefully".

Do you think there was something highly inflammatory and dangerous in this statement? Think about it. Nations break all the time. We were chanting the same slogan under Britishers.

The administration sent security guards to cover the badminton court where the meeting was supposed to happen and denied permission to use microphones. The organizers decided they would continue the meeting around the dhaba area on the campus without the mics. Agarwal alleged that ABVP members gathered there and started threatening and intimidating the students -- many of them Kashmiris -- who turned up for the meeting. They started shouting slogans such as "Ye Kashmir Hamara hai, saara ka saara hai."

The organizers countered them with the slogan: "Hum kya chaahte? Azaadi!"

"Do you think there was something highly inflammatory and dangerous in this statement? Think about it. Nations break all the time. We were chanting the same slogan under Britishers. Soviet Union disintegrated. Secession is neither good nor bad. It depends on the precise circumstances of the region. And mind you, I don't support the secession of Kashmir. I claim to have insufficient knowledge of the situation and conditions of the people residing in that region. Hence, I am neither for nor against it. Hence, I have no problems with a group of students simply shouting slogans in support of a particular region's freedom. They were not planning a conspiracy to overthrow the government and seize Kashmir from India. They were simple students who read, travel and learn about socio-political issues and have a stand about it," he wrote. (JNU teachers and students form a human chain inside the campus in protest against arrest of JNU Student's Union president Kanhaiya Kumar demand the release of Kanhaiya Kumar who was arrested on sedition charge in connection with an event organised on the campus against the hanging of Afzal Guru, at JNU campus, on February 14, 2016 in New Delhi, India. Photo by Sanjeev Verma/Hindustan Times via Getty Images)

"So, a group of students believe that Afzal Guru was framed, had no role in the attack on the parliament and his capital punishment was wrong. Big deal? And were therefore shouting, 'Har ghar se Afzal niklega!' And mind you, these people are not carrying any arms, all they are carrying are ideas. So, in such a case, what should the state do? Charge them for conspiracy against the state? Or maybe merely try to engage with them, debate with them about a difference of opinion?"

Agarwal went on to claim that not a single JNU student was involved in the anti-India sloganeering.

He said a group of Kashmiris, angry over AFSPA -- a law that gives the police sweeping and often draconian powers in disturbed areas -- for decades, started shouting slogans against India such as "Bharat ki barbaadi tak, jung rahegi, jung rahegi!" They were not from JNU, he insisted, citing the close inspection of a video that is being circulated from the event. Calling the subsequent arrest of JNU students as a government "witch-hunt", Agarwal said police picked up the JNUSU President from within the campus with "no substantial evidence" even though he did not shout the slogans.

"In my almost 2.5 years of stay in JNU, I have never heard these slogans shouted anywhere. These are nowhere even close to the ideology of any left parties, let alone DSU," he wrote. (JNU teachers and students form a human chain inside the campus in protest against arrest of JNU Student's Union president Kanhaiya Kumar, demand the release of Kanhaiya Kumar who was arrested on sedition charge in connection with an event organised on the campus against the hanging of Afzal Guru, at JNU campus, on February 14, 2016 in New Delhi, India. Photo by Sanjeev Verma/Hindustan Times via Getty Images)

Scores of JNU students yesterday formed a human chain and raised slogans, demanding that sedition charges against Kumar be dropped. The students were also joined by families of staff members residing on the campus.

Several activists joined by people from different walks of life staged a protest at Jantar Mantar, expressing solidarity with the agitating students and teachers of JNU. Afzal Guru's lawyer N D Pancholi said, "Slapping sedition charges on students is condemnable and the government is using it to gag voices of criticism.

Earlier in the day, members of ABVP had also staged a protest on the campus and said those supporting Kanhaiya were also contributing to "anti-national" activities. 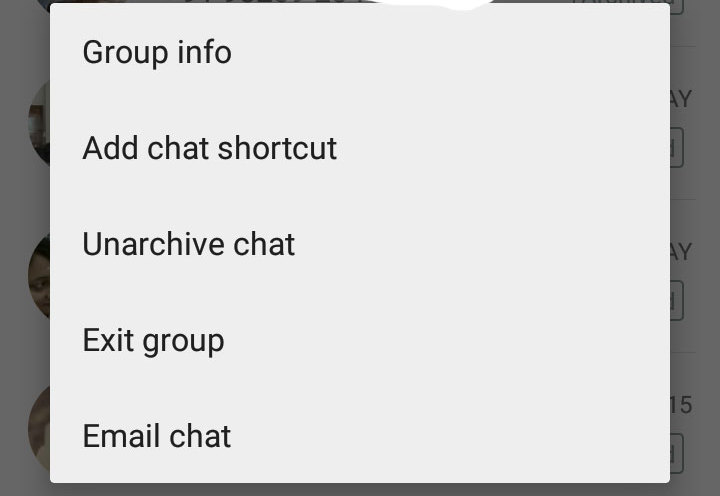 1 / 6
Archive chats
This feature lets you hide a conversation from your chat tab, and access it later, if needed. To do so, long press on a chat you wish to hide, and select Archive chat. You can also choose to archive all chats by tapping on Chat Settings, Archive All Chats. Using this feature doesn’t delete or back up the chat on your SD card.