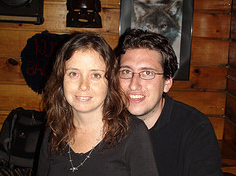 Bugs. When I remember of Zambia, I think of bugs.

It started when a mysterious little creature bit Dani on the side of the head, we spent hours monitoring the swelling bite as it inched near her eye, applying cortisone, and praying that we wouldn't have to go to the clinic. Thankfully, Dani's head didn't explode and the bite went way.

But her adventures with the insect world weren't over. The next day, as we were lying down on the bed in our hostel, Dani jumped up, shaking her head from side to side. A cockroach  had crawled into her ear and refused to leave. For the record, we're not sure if it ever came out (gross, but true).

Despite a mosquito net, our favorite bug repellent (Dani has a new found love for chemicals), and wearing clothes head to toe while we slept—the bugs were everywhere.

Even at our local internet cafe cockroaches were crawling over the keyboard and we didn't dare open the drawers of the dresser in our room—better not to know what else was also calling the hostel home.

Bugs aside, Zambia was our of my favorites countries. There's not a lot of infrastructure, or DSL, or tourist destinations to visit in Lusaka. And definitely not a lot of food options for the vegan/vegetarians (thank Vishnu and Shakti that there was one Indian restaurant within walking distance). Yet, in this medium sized city were some of the nicest people we've met yet on our journey and where we had some of the most frank conversations with agricultural aid workers.

You immediately feel safe in Lusaka. People are proud of the fact that during the day anyone can walk nearly anywhere, despite the fact that we didn't see a single police car. Zambia is also laid back. Don't expect many places to have "take-away" cups for your coffee, and don't expect any meal your order at a restaurant to arrive in under a half-hour. But the culture of being relaxed, sitting down to enjoy a meal, and allowing the day to float by, is something I will deeply miss as we continue to travel. No one seems in a rush in Zambia and no one rushes you. 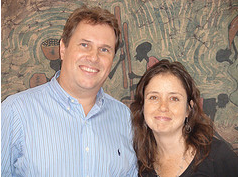 Jan Nijhoff, who sits on the advisory group of Nourishing the Planet, served as a terrific host. In only three short days we had an  incredible set of meetings with CARE , COMESA , Community Markets for Conservation (COMACO), the World Food Program, USAID , and others. As part of our visit, Jan took some of the most experienced staff from various organizations to engage in a frank and open discussion on a wide range of topics that included: misuse of donor money, the role of the market and private sector in sustainable agriculture, developments in cell phone technologies to aid farmers, carbon trading systems, and so much more.

We spent hours with Jan having exhilarating conversations that range from the fluctuations in maize pricing to the prevalence of outdoor hockey rinks in the Netherlands.

We also met with an environmental reporter named Benedict Tambo with the Zambian Daily Mail. Benedict lamented the fact that businesses were ordering fewer and fewer papers and a rising number of people impacted by the economic downturn were choosing food over their daily news. To maintain his environmental beat, Benedict also writes sports news, and sometimes even entertainment. The troubles seemed all-to-familiar with those faced by the newspaper industry in the United States. 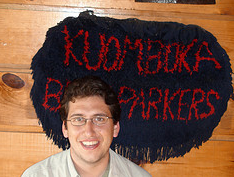 We stayed at a fun hostel called KuOmboka, at 20$/night for a private room with fan. The place has a bustling bar that attracted far more locals than tourists. The 24-hour internet cafe, accessible laundry facilities, and the pumpkin leaves on the menu were the real selling point. The place was extremely friendly, people genuinely trying to be helpful, and down the street from a lovely Indian restaurant that had all-you-can-eat vegetarian tali for four dollars. We also tried various traditional Zambian foods, and I watched Dani eat an entire bowl of Maize meal, called "nshima," which admittedly didn’t taste that bad. The local beer is called Moshi. It's a light beer and when I told a Zambian it reminded me of Budweiser, he was truly insulted. Even after I told him: "But I like Budweiser!" 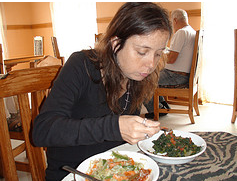 We spent Saturday night as spectators, visiting a local club called Brown Frog and watching Zambians get down with some intense rumba and salsa dancing while we downed jack and cokes. Zambia has a real "joie du vivre" and I watched as people smiled and glowed as they danced. People were dressed to the nines, the woman sporting decadent dresses, and the men sporting their dress shirts. Some of the couples had clearly been practicing, as their moves seemed so fluid they'd been choreographed for the crowd.

We also visited an organization created by a North Carolinian named Dale Lewis, whose life's work has been in testing methods to have the most impact possible on conservation and in reducing the pouching of wildlife. After years of trial and error, his data showed that lifting farmers from poverty through providing access to a market, offering training, and fair wages, was the single biggest factoring in protecting wildlife. The growth, size, and scope of his operation was mind-blowing, employing hundreds of staff that involved thousands  of farmers. Dale's dream is to make COMACO and it's brand (terrific nuts, honey, and peanut butter) self-sufficiant. He says that he is 70 percent their, while receiving training from Minneapolis-based General Mills, and support from Howard Buffet, the Bill and Melinda Gates Foundation, and others.

It rained nearly the entire time we were in Zambia, and after three straight days of downpour, and flooding on the neighboring streets, we wondered if our ground floor hostel room would soon be under water. After many months of drought the rain seems to be coming at the wrong time, too late to help farmers harvest crops. People were clearly getting nervous as newspapers predicting an entire week of rain.

While it is easy to find companies willing to take you by bus the nearly 25-hour route from Lusaka to Johannesburg, it's another story to get to Zimbabwe's capital Harare which is a stop along the route. We found a company whose transport reminded more of a  traditional school bus than a commercial bus company. When you arrive at the bus station, dozens of people hoard around you, trying to out-negotiate each other assuming that you are headed to visit Victoria Falls in Livingstone. Yet, that doesn't seem like the right  mission for this trip, with so many exciting organizations and projects awaiting us in South Africa, Mauritius, Madagascar and beyond...

Thank you for reading! If you enjoy our diary every day we invite you to get involved:

1. Comment on our daily posts -- we check for comments everyday and want to have a regular ongoing discussion with you. 2. Receive regular updates--Join the weekly BorderJumpers newsletter by clicking here. 3. Help keep our research going—-If you know of any great projects or contacts in West Africa please connect us connect us by emailing, commenting or sending us a message on facebook.