Almost Three-Quarters of U.S. Users Now Have iPhone 6 or Higher

Consumer Intelligence Research Partners (CIRP) released research on the installed based of iPhones in the US.

Chart 1: Installed Based of iPhones by Model 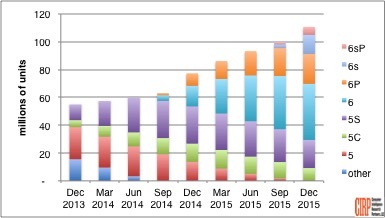 The analysis reveals the strength of the strategy to offer two sizes of phones, including the larger Plus model. We estimate a combined 81 million of these two format flagship phones sold in the US from the September 2014 launch through December 2015. For comparison, the iPhone 5S sold about 40 million in the same period in 2013-2014. Not surprisingly, the 6s and 6s Plus did not sell quite as well as the original 6 and 6 Plus, as the first new size models accelerated upgrades last year, leaving fewer potential buyers for the second generation.

By analyzing data on iPhone buyers, their new model selection, and their prior phones, and overlaying Apple iPhone sales data adjusted to the US market, CIRP estimates the number and model of iPhones in use each quarter. This installed base grew on average 9% per quarter for the past eight quarters. In the December 2015 quarter, the installed base grew 11%, compared to 23% in the December 2014 quarter.

CIRP bases its findings on its December 2015 survey of US Apple customers. CIRP samples 500 customers that purchased an Apple product (iPhone, iPad, or Mac computer) in the preceding quarter. For additional information, please contact CIRP.