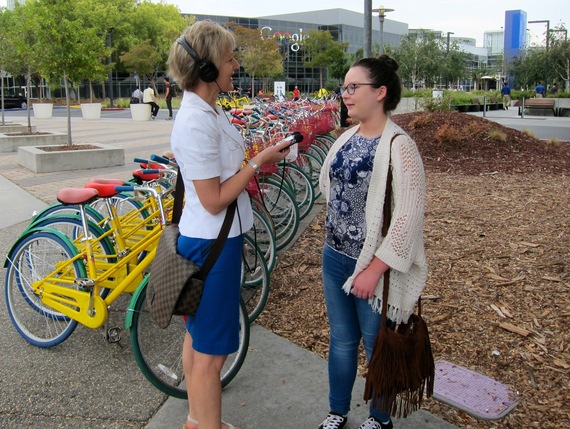 This year a teen delegation from the United Kingdom won a trip to Silicon Valley, courtesy of Silicon Valley Comes To UK (SVC2UK), the transatlantic brainchild of LinkedIn's Reid Hoffman and UK-based angel investor, Sherry Coutu.

According to the organization, apps are expected to create over 3 million jobs in the next 5 years; and the SVC2UK Appathon contest aimed to inspire a new generation of young entrepreneurs in the UK. Three 14-year-old girls from Notre Dame High School in Greenock, Scotland and four Cambridge University students won a trip to Silicon Valley to learn about entrepreneurship.

"Back in Britain a lot of people are scared to make the leap and do their own thing...(they're) scared of not doing well" Ellie Wilkie, age 14

I had the opportunity to meet and interview the young entrepreneurs as they toured LinkedIn and Google. Ellie Wilkie was a natural leader and spoke confidently for her two Scottish colleagues. Each one of them was energized and inspired by their time in Silicon Valley and eager to take some of the "can-do" Silicon Valley attitude back with them to the UK.

Here are highlights of our conversation (comments have been edited for length and clarity):

van Diggelen: How does entrepreneurship in the UK compare to Silicon Valley?

Ellie Wilkie: Back in Britain a lot of people are scared to make the leap and do their own thing. Here...you do internships which aren't as readily available back home. Out here, it's much more put into the school curriculum...and lots of people learn about it from a much younger age, especially if you live in the Bay Area with all the major tech companies around. It's good to see - as a young person - all these young people doing so well. Back home it's not so publicized about how boys and girls can do so well... in companies like this and how exciting they can be.

van Diggelen: What are entrepreneurs in the UK scared of?

Ellie Wilkie: Scared of not doing well. Taking that leap and it doesn't work...well (if you don't try)... You're never going to know are you? In (UK) companies, bosses and CEOs and managers of companies seem very intimidating and I'm not really wanting to go and speak to them, whereas here it's much more: everybody's the same and everybody's much more approachable.

Ellie Wilkie: Definitely, it's much more: everyone can do this. Whereas back home it's a very specialized thing ... Lots of people feel that they couldn't do something like that.

At Facebook, no one has an office, everyone is the same and everyone's voice is listened to, so there's no scary going up to your boss and saying, is this OK? ...

van Diggelen: What will you tell your friends back in Greenock?

Ellie Wilkie: Seeing women in tech, college students from around here doing so well and having a real input...Women saying "we felt we had a real worth in the company " They got to make decisions and got to be involved in the actual design processes. Even at such a young age they can be so involved and so vocal in what they do.

van Diggelen: What are you inspired to do after visiting all these companies (Facebook, Tesla, LinkedIn, Box and Google)?

Ellie Wilkie: I'd like to be out here working for any one of the companies. They're all incredible. I've always had an interest in technology but seeing people actually doing well and have a passion for it has cemented in my mind I can see myself doing this. This is what I want.

***
"Here (in Silicon Valley), 'NO' is not really in their vocabulary...they get stuff done" Benjamin Moss

I spoke with Benjamin Moss, who's completing a Master's in Aerospace Engineering at Cambridge University

van Diggelen: What surprised you most about how business is done here in Silicon Valley?

Benjamin Moss: Here, 'NO' is not really in their vocabulary...they get stuff done. They're extremely ambitious and if something is required to achieve these ambitions then nothing really stands in their way.

There's quite a bit of risk aversion in the UK in the way there isn't here. People in the UK have a lot of pride and they don't want to look silly, so if they come up with an idea and it doesn't work, then they're very concerned about having looked silly.
Whereas in Silicon Valley, coming up with an idea and it not working and your moving on and learning from that experience is positive.

Find out more
Read more at Fresh Dialogues about entrepreneurship in Silicon Valley.

Elon Musk's journey from South Africa to Silicon Valley: How did he become the reluctant CEO of Tesla Motors?