Coauthored by Jill Castle, MS, RDN, childhood nutrition expert and author of the new book, Eat Like a Champion: Performance Nutrition for Your Young Athlete.

If you look around at what some young athletes are eating, it's not the fuel you'd expect to find. Athletic fields are riddled with cupcakes, candy, and cola. Concession stands are loaded with more junk food than healthy fare. And while the food options could use an overhaul, the eating habits of young athletes aren't stellar either.

In fact, a review study found that kids participating in sports eat more junk food, soda and calories than kids who don't. While good eating habits promote health and a young athlete's performance, bad habits can compromise athletic performance and even a child's growth.

So with this in mind, here are five eating habits young athletes should break if they want to take their athletic performance to the next level:

1. Skipping Breakfast. It's estimated that about 20 percent of kids (9-13 years) and 36 percent of teens (14-18 years) skip breakfast. Running late in the morning and not feeling hungry are reasons young athletes skip out on breakfast. Athletes need breakfast not only for revving up their engine (metabolism), but also for paying attention in school, meeting important nutrient requirements, and feeling energized throughout the day. Breakfast kicks the body in motion, so skipping it means things can get off track, especially appetite.

The antidote? Set the alarm earlier, prep the night before, or have some grab-n-go options like a cup of instant oats, yogurt, or bagged dry cereal.

2. Light-loading Lunch. Some athletes think it's healthy to opt for a salad or a cup of soup for lunch, or maybe a sandwich and nothing else. Some may even skip lunch all together. This "light-load" approach really doesn't work, especially if after-school training is on the horizon.

Lunch is the meal that loads the athlete's body with essential carbs and protein (as well as other nutrients) for training. So a salad or broth-based soup won't cut it, but a sandwich or wrap on whole grain bread served with a cup of soup and fresh fruit is a good bet.

3. Overeating Later (after school, practice, and late at night). When the young athlete skips a meal, or lightens up on eating earlier in the day, he is bound to experience significant hunger later on. After school or practice, or even after a full dinner, hunger may rear its ugly head, prompting the athlete to overeat, or perhaps binge on food (eat a large amount of food in a short period of time).

Overeating may cause unwanted weight gain, and when done at night, may interfere with the athlete's morning appetite, and disturb a healthy eating routine during the day. This overeating at the end of the day robs the athlete's body of needed nutrients for training and learning at school during the day when it's needed most.

4. Eating the Wrong Food. Candy, sweet muffins, chocolate-coated granola bars, chips, and cookies are the wrong foods for young athletes to be snacking on. Once in a while, on a non-training day, or in the context of other healthy foods is okay, but relying on these foods to sustain a training program or competition is silly.

Unhealthy foods can fit into an athlete's diet, but their role should be limited. For example, one or two regular portions of sweets can fit, however, eating a chocolate chip muffin for breakfast, a big cookie and chips at lunch, popping Skittles throughout practice, and finishing the day with ice cream is a bad idea. Eating the right foods, and downsizing the wrong foods, is a way many young athletes can improve their diet and their athletic performance.

5. Forgetting Fluids. A headache, feeling tired, and a sense of hunger may be signs of poor drinking habits. Dehydration is common among young athletes and stems from getting behind in fluid consumption. Some athletes forget to drink, and play catch-up at practice, which doesn't work.

Young athletes need to know prepping for practice should take place all day, from eating nutritious, juicy food to drinking plenty of water before, during and after training.

If you've got a promising young athlete, don't let these bad eating habits get in the way! They are sure to curbside your young athlete's hard work, on and off the field. 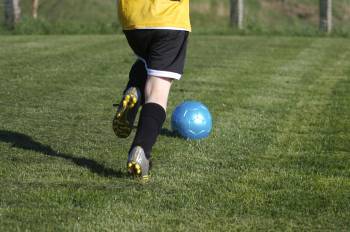 More:
Parentsyoung athleteshealthy snacking
Newsletter Sign Up
Raise the kind of person you'd like to know
Subscribe to our parenting newsletter.
Successfully Subscribed!
Realness delivered to your inbox