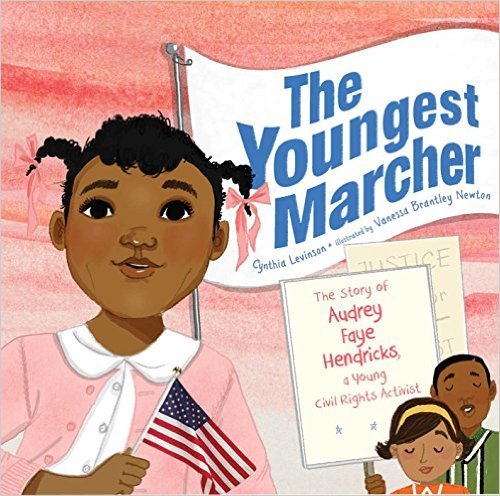 What's a parent to do when their nine-year-old daughter has been influenced by a family friend, named Mike, who often dropped in for a family dinners? Mike was what they called him but his real name was Dr. Martin Luther King. Cynthia Levinson and illustrator Vanessa Brantley Newton have brought to life the experience of Audrey Faye Hendricks who listened wide-eyed and thoughtfully at grown-up talk about fighting for Civil Rights. It's a picture book called The Youngest Marcher: The Story of Audrey Faye Hendricks, a Young Civil Rights Activist.

Audrey had personal experience of the Jim Crow laws. She could buy an ice cream cone at Newberry's but she couldn't eat it at the counter. She could pay the bus driver at the front door but then had to go sit in the back. She had to take the dirty freight elevators in the fancy downtown department stores if she wanted to shop there. She was old enough to understand that this wasn't fair.

She listened when Mike spoke at church and exhorted people to picket against the laws and get arrested. He told them to fill the jails but the grown-ups had too much to lose by protesting. They were afraid they would lose their jobs, or their homes or get beaten by the police. So when Jim, one of Mike's friends suggested that if adults wouldn't fill the jails, why not fill them with children? What a powerful statement that would make! Audrey was one of the first to volunteer. On the first day of the march, she joined the mostly high-school students as they were shepherded into paddy wagons and delivered to the children's detention facility.

Throughout the week, more and more children arrived. Finally, the facilities were so overcrowded they had to let them go. The Birmingham Children's March in 1963 was written up in the newpapers.

"The Birmingham campaign was a crucial campaign," says Clayborne Carson, director of the Martin Luther King Jr. Research and Education Institute at Stanford University. "He had never led a massive campaign of civil disobedience before, and there were not enough adults prepared to be arrested. So the Children's Crusade turned the tide of the movement.

"
I remember my childhood very well. I had strong opinions of some of the things I heard grown-ups talking about and wondered if anyone would ever be interested in what I thought. Audrey Hendrick's parents listened to her and respected her intentions. Children see the world they are growing up in. Some of them have some very good ideas about how they can help push the needle the right way. Many of them are trying to tell you what they think. Are you listening? You might just learn a thing or two.