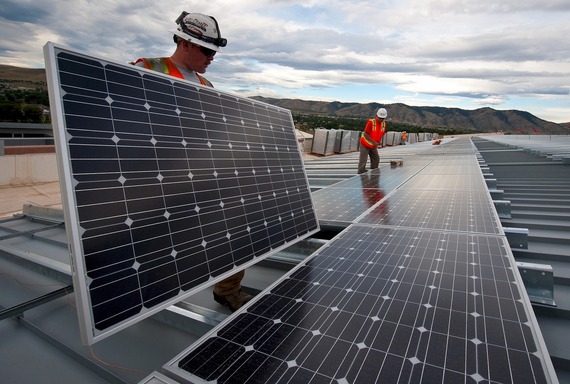 That whoosh you just heard was China passing the United States in the race for the 21st century energy economy. Or is it the 21st century jobs race? Or the “world’s only superpower” race? Unfortunately, it might be all three.

Last week, China announced it will invest $361 billion over the next three years in renewable power generation. Compared to the $90 billion dedicated to clean energy in the 2009 stimulus package that was spread over several years, it dwarfs America’s commitment to an industry that nearly every country on Earth agrees will dominate the global energy landscape.

Surely, China’s air quality is playing a role in its government’s planning. The country has a severe air pollution problem – its hazy city skies are as famous as its Great Wall. Still, it would seem strangely out-of-character for China – given its history on environmental issues – to spend three times as much money as the United States on a tree-hugger pipedream.

This move is about energy security, economics, and global politics. Smart people in America have been arguing that cleaner energy is more than good environmentalism; it’s good for the economy and our national security, as well. Apparently, China’s caught on.

With a population of 1.3 billion people, China is coming to global prominence, and it needs a staggering amount ofenergy to power its hungry economy. It knows that homegrown, renewable energy (not imported from the Middle East) will need to play a critical role in meeting its long-term energy needs.

Long an exporter of goods to the rest of the world, it is no doubt also looking for the next new industry that will satiate a few hundred million millennials who need work. Clean energy and the many advanced technologies that will make it better, cheaper, and more reliable are a great investment for China. Reuters reports this one investment will spark the creation of 13 million Chinese jobs. By comparison, roughly 10 million total jobs (that’s all jobs in all industries) have been created in the United States since the 2008 recession. Imagine the potential job growth if we were to get serious about clean energy here.

Meanwhile, our president-elect campaigned against renewable energy and is promising to bring back the glory days of coal. Congress is playing along, preparing legislation that will prop up a century-old industry that is, by almost every measure, dying.

Partisans like to blame President Obama for coal’s problems. The truth is, American coal electricity peaked in the 1980s and has been on a long death slide ever since. Fewer than 60,000 Americans now make their living mining coal. Nearly half of American coal is produced by companies in bankruptcy. If President-elect Trump and Congress spend billions to prop up failing coal companies, they’ll simply be delaying the inevitable, not creating lasting new jobs for Americans who so desperately need them.

Renewable energy, on the other hand, has been an incredible job creator over the last two decades. At least 2.5 million Americans work in clean energy industries. Since 2014, the solar installation industry has created more new jobs than oil and gas pipeline construction and crude and natural gas extraction combined. In total, there are more than 200,000 American solar jobs today and more than 88,000 wind power jobs. These industries provide good paying jobs at various skill levels, and most of them can’t be moved overseas.

China’s investment will have consequences beyond our borders, too. Nearly every country has signed the Paris Accord, while President-elect Trump has threatened to pull out. If the next four years play out as President-elect Trump and China have signaled, China stands to grab the mantle of “world’s greatest energy innovator,” something that would make Edison, Rockefeller, George Mitchell and every other original American energy innovator turn over in their graves.

There’s still time for President-elect Trump to come around, but it’s running out. If he were to embrace clean, renewable energy as the jobs creator it is, he could transform our energy policy and spur remarkable economic growth. But if he continues to promise a coal renaissance, we’re in for a long, dirty future. You know what China’s hoping for.