It is twilight, between 6:30 PM and 8:30 PM; a team of poachers feigns a distressed vehicle on a roadside near an animal reserve somewhere in southern Africa. Having scouted the animal earlier in the day, or having been tipped off by a corrupt official or willing tribesman, they quickly move into action. They kill, cut off horns and tusks, and rapidly leave the area, all under the cover of darkness. Poachers operate under the cover of night--rangers haven't had an effective way to anticipate where attacks are likely to occur across the vast land areas that need protecting--until now.

Air Shepherd, a new initiative of the Lindbergh Foundation is bringing together technology partners: Peace Parks Foundation (PPF), UAV and Drone Solutions (UDS) and the University of Maryland Institute for Advanced Computer Studies (UMIACS), for an innovative new approach to successfully stop poaching of elephants and rhinos in southern Africa. 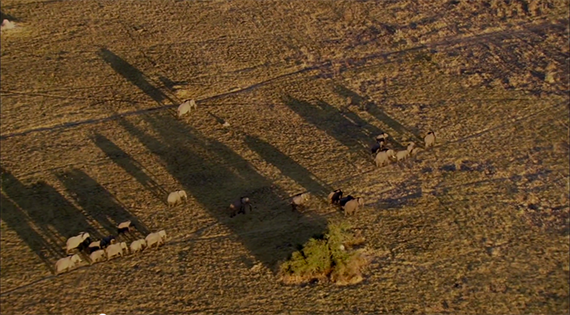 Exponential Loss
Africa is loosing about 7% of its elephant population to poaching annually, according to research published in the Proceedings of the National Academy of Sciences, nearly 40,000 elephants were killed by poachers last year alone. Elephant births occur at a rate of only 5% annually--this means, more elephants are being killed than are being born. At this rate, based on current animal population rates from the African Elephant Database (AED), all elephants in the wild will be dead in approximately ten years.

The situation is equally dire for rhinos, according to data published by the South African Department of Environmental Affairs (2015) an astounding 1,215 rhinos were killed by poachers in South Africa in 2014--that's 3 rhinos per day--one rhino every eight hours.

The Western black rhino was declared extinct by the IUCN (International Union for Conservation of Nature) in 2011 with poaching indicated as the primary cause. The IUCN has recently placed all five remaining rhinos species on the RED LIST of threatened species. Three out of five rhino species are classified as critically endangered due to poaching. As with elephants, we will soon reach a tipping point with rhinos as well--where deaths outpace births. 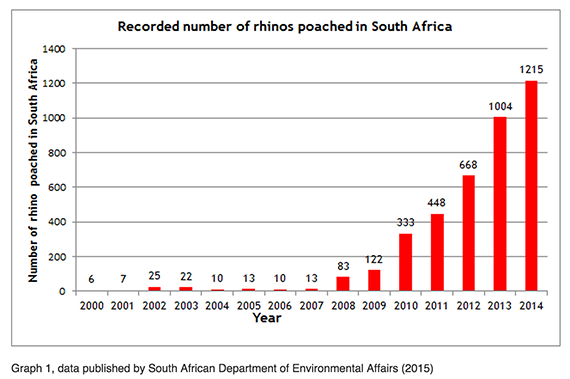 (source: Save the Rhino)

Exponential Demand
The demand for ivory is a new phenomenon that has grown exponentially over the last ten years. Tusks can be worth $150,000 or more and an average rhino horn (1-3 kg each, depending on the species) can garner over a quarter million dollars. The price per kilogram on the black market has soared to as much as $65,000 per kilogram, or nearly $30,000 per pound, making it more valuable per ounce than gold, platinum or cocaine.

Since 2000, the burgeoning middle class in China has been driving the demand for ivory carvings and trinkets to symbolize their newfound wealth. Likewise, Vietnam is leading the demand for rhino horn, where it is being ground into a powder as an additive for cocktails, touted as cure for cancer and hangovers, and to increase virility. In a survey carried out by TRAFFIC, the wildlife trade monitoring network, they identified that these consumers are motivated primarily by image and status among their peers. 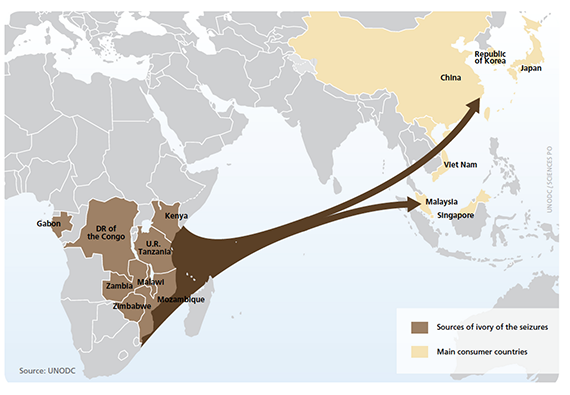 The illegal wildlife trade is emerging as one of the world's most lucrative criminal activities. Well-organized syndicates operating as transnational criminal networks linked to poaching often participate in other illegal activities, including trafficking of narcotics and weapons--some with ties to terrorist networks.

According to a report by Chatham House, smuggling of endangered species and their products mainly from sub-Saharan Africa by international organized crime rings and armed groups is now worth as much as $10 billion annually.

The methods currently being employed to stop elephant and rhino poaching are simply not enough to combat the problem.

Drones and Data make the Difference
Tom Snitch, Ph.D., at the University of Maryland Institute for Advanced Computing has developed breakthrough technology, APE (Anti-Poaching Engine), that uses sophisticated predictive analytic software (originally developed for the military to predict insurgencies in Iraq and Afghanistan) along with high-resolution satellite imagery, intricate mathematics and complex algorithms to determine exactly where animals and poachers are likely to be on a given night.

Snitch makes the analogy that rhinos are to US troops as poachers are to terroristic bombers saying, "we used UAVs in Baghdad to find IED bombers and now we are using UAVs to find poachers in South Africa". 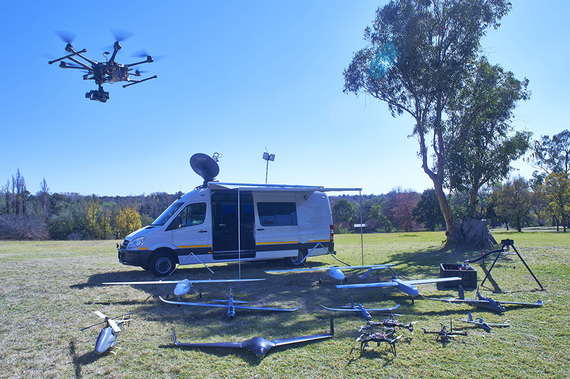 The UAVs operated by UDS, are equipped with infrared cameras and GPS to identify animals and poachers with thermal imaging--they can literally see any heat image moving across the plains at night in real time. The drones are battery powered--almost completely silent and nearly invisible, providing operators with the critical intelligence necessary to rapidly deploy rangers to the location of the poacher before he kills.

"We don't necessarily look for poachers, but we really need to know where the animals are. With this knowledge, we can fly UAVs in the African night sky with infrared cameras to alert us to where the poachers are coming from to attack the prey." said Snitch.

Mathematics and Migration Models
According to Snitch, he mathematically recreates what the environment was like on nights that experienced poaching in order to identify patterns of behavior. A massive amount of data is collected such as, weather conditions, wind speeds, moon phases, criminal events, ranger patrol patterns, and animal migration models; and superimposed on high-resolution satellite imagery of the area to create "maps".

These maps help to determine UAV flight paths, "the algorithms tell us precisely where the UAVs should look for rhinos and poachers and the model strategically places the rangers very near the animals" says, Snitch. APE has been predicting where poaching is likely to happen with more than 90% accuracy. 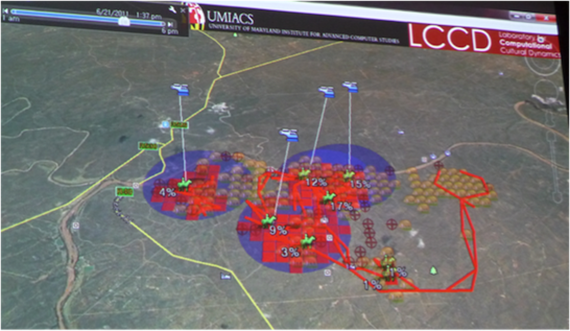 UAVs transmit infrared images in real-time to operators in mobile command units-- rangers that have been pre-positioned are vectored to precise locations when poachers are identified. "In short, our team has created the world's most sophisticated model of poaching behavior," said Tom Snitch, "we have completed analytical studies of how animals, poachers, rangers and UAVs simultaneously move through space and time.

In tests conducted in association with Peace Parks Foundation over the last 24 months, in over 650 missions flown, and over 1000 flight-hours, no animals were killed while drones were in flight according to Air Shepherd officials.

"We have the distinct potential of being able to turn the tables on this threatening trend in a very short time," said John Petersen, chairman Lindbergh Foundation, "once we have these teams in the field, our experience says that the killing starts to rapidly grind to a stop."

SANParks (South African National Parks) announced Thursday that these UAV solutions are an integral part of the current strategy to combat rhino poaching in the Kruger National Park.

The Lindbergh Foundation aims to raise $500,000 through Indiegogo to fully implement the Air Shepherd program for one year at Ezemvelo KwaZulu-Natal Wildlife (Ezemvelo) with future plans to expand into seven additional African countries that have indicated an interest in implementing the program. With 40% of the goal already raised, the campaign runs until April 11th so there is still time to support this incredible initiative.

For decades, the Lindbergh Foundation has been a leader in encouraging the use of technology to protect the environment. The foundation focuses on technological breakthroughs to address aviation-environmental issues.

Creating SeaChange—profound & notable transformation for social good at the confluence of entertainment & technology.