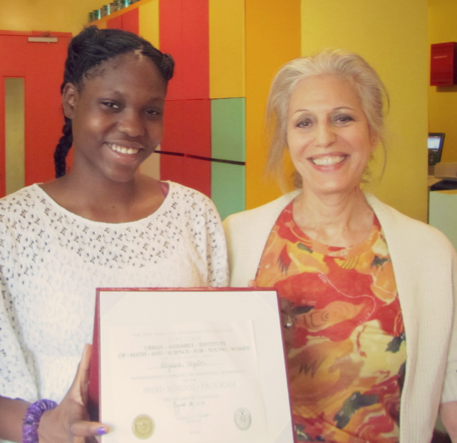 When Alyssa was young, her family moved a lot. Always the 'new kid' in school, it was difficult for her to make friends. Her first real opportunity to establish roots came when her family moved to live with her grandmother in Bushwick.

In the 1990's Bushwick was a tough neighborhood. Houses stood vacant and dilapidated, refuge for the homeless and drug-addicted. The rampant drug trade on the streets led to an atmosphere of violence and one of the worst murder rates in the city. It was far from an ideal place for a child to grow up, but it was here that Alyssa was to make her home. v

When a child grows up surrounded by violence and death, an education can appear inconsequential. Rather than concentrating on schoolwork, making friends, and enjoying the freedom of spirit that childhood brings, their surroundings teach them to be driven by fear and mistrust of the people around them. By the time Alyssa was in 6th grade she was quiet and reclusive, avoiding her peers and rarely engaging with those around her. She commuted to her old school from her new neighborhood, making it harder to form friendships with children from either. Alyssa felt out of place, as if she didn't truly belong anywhere, including her own home.

Alyssa was introduced to Publicolor when she was in the 8th grade by her cousin, Keshawn, who had been attending Publicolor workshops and travelling to their paint sites. Keshawn excitedly described the fun he was having in the Publicolor programs, and when he mentioned the perks of snacks and a little bit of pocket money he could earn, Alyssa decided to try it out for herself. After trying out, she was inducted into the COLOR club and has been with Publicolor ever since.

Alyssa noticed immediately that the values of Publicolor were unlike those she had become accustomed to. Being 'different', as Alyssa felt she was, went from being the center of criticism and negativity to a feature of individuality to be celebrated; for maybe the first time in her life, uniqueness was appreciated. One particular memory that Alyssa recalls fondly was during a lesson on bookbinding when she believed her mistakes had ruined her project. In the words of one of the Publicolor team members, Melissa Rioux, it is the imperfections that make a project amazingly unique.

At Publicolor's paint sites Alyssa learned to appreciate attention to detail and hard work, drawn to the marriage of structure and creativity she saw there.  She still remembers learning the 'fold-over method of taping corners', and the meticulous organization of the workstations resonated with her passion for structure.  She remembers fondly the day that her site leaders gave her an award for being "by the book" and the best staff assistant. The more she saw how the staff prioritized the students in everything they did, the more she broke out of her shell.  Eventually Alyssa wanted to be at Publicolor every day.

Before Publicolor, college was never even a consideration for Alyssa. Nobody in her family had ever attended college, and there was no inspiration for her to be the first. Publicolor's 'Next Steps' program was the first opportunity Alyssa had to look at college as a possibility, and break down what it would take to get her there into manageable goals. Between 'Next Steps' and the SAT prep course she took at Summer Design Studio, which helped her to improve her scores considerably, Alyssa graduated on time from high school and proudly became the first person from her family to attend college.

With the assistance of Publicolor's scholarship program Alyssa is currently a sophomore at City College. Despite difficulty adjusting to the pressures of full-time education, the lessons she took away from the Publicolor programs have led her to double down on her efforts and work toward the dreams she never thought she could have. She plans to get her business management degree with a focus on school management in the hopes of one day becoming a school principal and being able to offer her own students creative outlets that showcase their uniqueness, and to pass on the value of community and volunteerism that Alyssa herself was taught.