The median American heading into retirement has just enough wealth to live on for a little more than three years, according to a new paper by the Center for Economic and Policy Research’s David Rosnick and Dean Baker.

These Americans are the first 401(k) generation: Their prime working years coincided with the 3 1/2 decades since the introduction of tax-deferred retirement accounts. And yet most of them have accumulated a relatively small amount of wealth, if any, outside of owning their home.

For Americans ages 55 to 64, net worth, the equity they own in their homes, and the value of other assets they own are each falling at precisely the time in their lives when they should be rising.

It’s a “pessimistic picture of economic progress since the end of the recession,” Rosnick and Baker write. The path of Americans’ net worth, including those about to stop working, hasn’t been a continual downward slide. In fact, Rosnick and Baker note that net worth grew significantly for more than two decades. But then, it was hit with the dual blows of a stock market and housing crash.

Net worth for the middle 20 percent of soon-to-be-retired Americans has fallen every year since 2004, and it is now just under $170,000. (The median is $165,700.) That might seem like a lot, but it’s just enough money to live at the median U.S. income of $52,000 for a little over three years. And when most of that wealth is tied up in a home, it's unclear how many of those in their upper 50s and early 60s plan to stay afloat without working or selling their home for what could easily be 20 or more years of retirement.

The poorest of the soon-to-be retirees have been hit the hardest. In comparison, the richest group is in an excellent position. 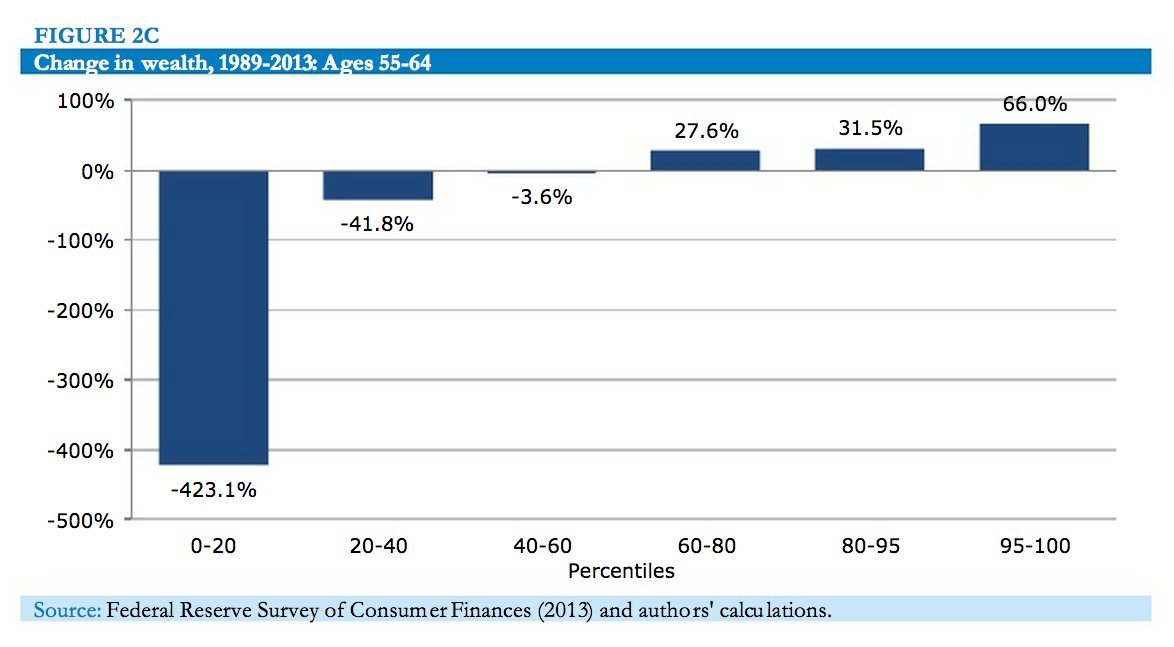 That is a chart of the wealth-destroying wrath of the housing crisis. It destroyed billions of dollars of net worth, and disproportionately hurt the poor, who are less likely to have any wealth outside their home.

Fewer Americans in the bottom 60 percent of wealth who are close to retirement own their homes than used to: In 1989, 77 percent of this group owned their homes, the researchers found. In 2013, that number was 60 percent.

And the poorer you are, the less of your home you own. This, the authors write, “implies these households will be paying off mortgages long into retirement, if they stay in their homes.”

Poorer near-retirees also own less outside of the value of their home than their wealthier counterparts:

The wealth, or absence of it, among Americans on the brink of traditional retirement age is another manifestation of a stock-market-led recovery. The stock market has boomed back from the financial crisis. Housing prices have recovered with it, but on a relatively smaller scale. Despite a more than 30-year commitment to tax-deferred personal retirement saving, stock ownership is not widely distributed across the American wealth spectrum. “House prices,” the authors write, are “a larger share of assets for the bottom three fifths of Americans.”

Recent years have shown that tying your net worth to your home’s price is, in fact, risky. Homeownership should not be a retirement plan.