A young girl in India has such an extreme case of hydrocephalus that her head has swelled to an alarming size.

Runa Begum has had the condition -- in which cerebrospinal fluid collects in the skull -- since she was born, her mother, Fatima, told Reuters. Doctors in the Tripura region, where the family lives, have been unable to provide relief. Runa's father, Abdul Rehman, doesn't earn enough as a brick factory worker to pay for more medical help.

Dr. Peter Heydemann, a pediatric neurologist at Rush University Medical Center in Chicago, told The Huffington Post that the girl could perhaps be treated with a shunt inserted to drain the fluid, but he expressed doubt whether any brain damage could be reversed. "Her brain has been under a fair bit of pressure," he said. "I wouldn't be surprised if the child was blind."

Heydemann suggested Runa (or Roona, as identified by some news outlets) might have hydranencephaly, in which the brain hemispheres are absent and the empty space is filled by cerebrospinal fluid.

Heydemann said he had never seen such an extreme case, but he added that the prominent veins on her scalp are a "common piece of this puzzle."

Gill Yaz, a health official for Shine, a British charity for hydrocephalus victims, told the Daily Mail that the shunt procedure takes just 30 minutes and that the shunts themselves cost between $300 and $1,200. But Rehman (or Rahman as he is referred to in the Mail) makes just $2.75 a day. 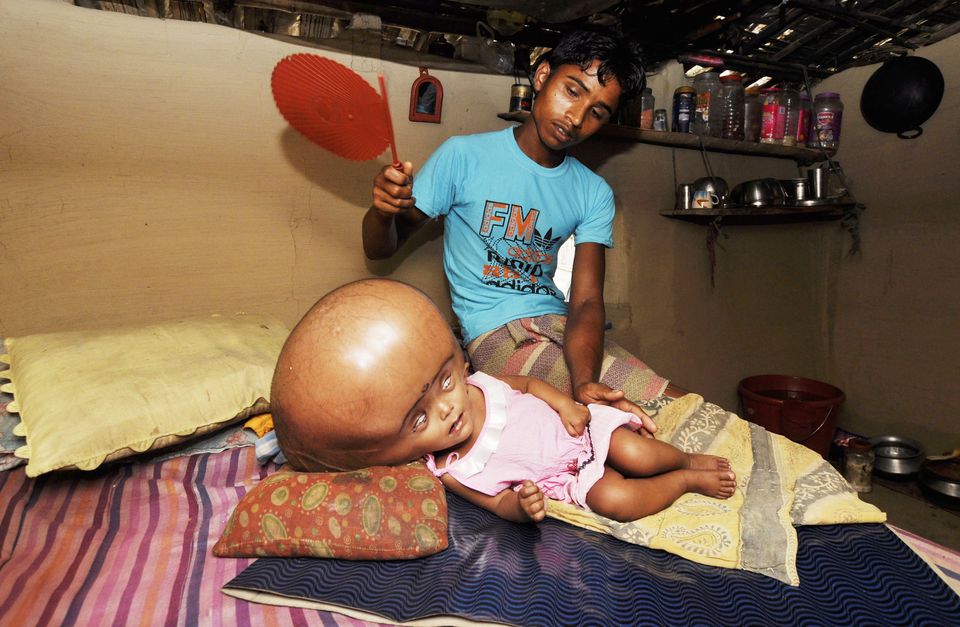 1 / 4
Runa Begum, Child With Hydrocephalus
Indian daily labourer, Abdul Rahman, 26, fans his daughter, Roona Begum, who was born with the condition Hydrocephalus, a buildup of fluid inside the skull that leads to brain swelling, in their home in Jirania village on the outskirts of Agartala, the capital of northeastern state of Tripura on April 12, 2013. Rahman works in a brick factory, where he earns 150 rupees ($2.75) a day, and does not have the capability to treat his daughter. India's rural development minister said in November 2012 that the country's public health system had "collapsed" in a blunt assessment of his government's failure to extend a social safety net for the poor. (Arindam Dey / AFP / Getty Images)