The recession might be officially over, but American views toward the institutions that brought the economic system close to collapse have never been worse.

According to a new poll by Gallup, 36 percent of Americans now say they have "very little" or "no" confidence in U.S. banks, the highest percentage on record since Gallup first started tracking that data. Those saying they have a "great deal" or "quite a lot" of confidence in banks has also stagnated, stuck at 23 percent for the second straight year, after falling to a low of 22 percent in 2009.

Safe to say it's been a tough year in the banks' public relations departments.

U.S. banks have spent much of the past year aggressively lobbying against the implementation of Dodd-Frank financial reform. This week, Treasury Secretary Timothy Geithner called out banks for the "huge amount of money [spent by banks] to erode, weaken, walk back" financial reform. Indeed, the largest-lobbying institutions of last year spent 2.7 percent more in the first months of this year in an attempt to combat rules including higher capital requirements and restrictions on swipe fees.

The nation's five largest mortgage servicers -- Bank of America, JPMorgan Chase, Wells Fargo, Citigroup and Ally Financial -- have also been the focus of a federal investigation into whether the banks defrauded taxpayers in their handling of foreclosures, first reported by The Huffington Post in mid-May.

In addition, in April, Goldman Sachs, the nation's fifth-largest bank by assets, was accused in a Senate report of systematically misleading clients by selling them assets known to be junk and then subsequently betting against that junk.

So this year's Gallup results only further emphasize the growing animosity toward banks in America. Never before 2009 had more Americans expressed more distrust than trust in banks. That has not only been the norm for three years now, but the gap is widening.

The percentage of Americans with a good deal of trust in banks has been nearly halved since 2007: 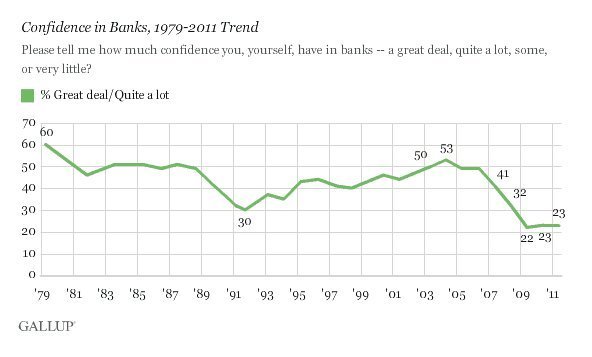 Although levels of confidence have fallen in all regions since the first years of the financial crisis in 2007, confidence is again on the rise in the Midwest and West. This year, it is the East that has the least confidence in banks, at 20 percent.

The below graph charts levels of confidence since the financial crisis: 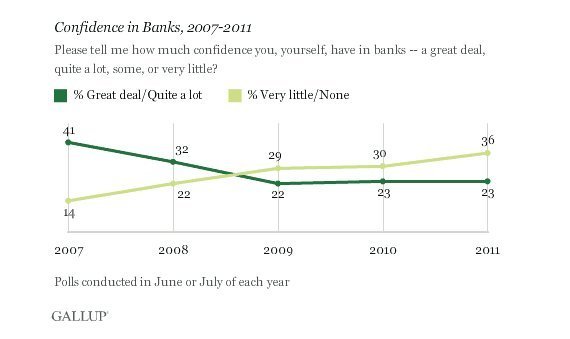