Note: The following is the second post in a series of posts from GET//OUT regarding its BLgT USA 50 state food tour. Each week, we'll be sharing updates, photos and more as the BLgT team travels across the country helping to raise awareness about and celebrate LGBT equality.

BLgT USA is the first 50 State Food Tour for Equality. The tour is being brought to life by GET//OUT, a new social enterprise creating fun ways to support equality. The tour was seed funded by 660 supporters from around the world who backed the team’s successful $150,000 Kickstarter. BLgT USA is getting people out for LGBT rights by eating a BLgT sandwich. Participating chefs across the country are doing their twist on the BLT, with proceeds going towards partner LGBT community centers all summer long. 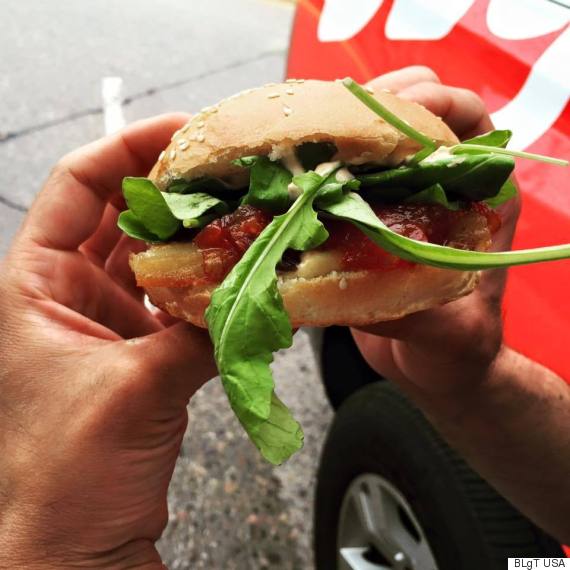 To round out our first week, the crew spent time in states rich with LGBT history. Stop number three was Vermont, and in addition to being home to some of the most breathtaking scenery in New England, Vermont embodies what it means to strive for equality. Vermont was the first state to grant civil unions beginning in 2000, and became the first state to pass marriage equality through its legislature rather than due to a court ruling in 2009. The list of LGBT inclusive laws and measures runs long, and includes gender-inclusive birth certificates and a statewide anti-discrimination law, among other measures. And even in Vermont, there is still work to be done.

Outright VT serves youth across the state, providing programs and services such as queer prom, Camp Outright, and Friday Night Group, a long standing program that brings LGBT youth together to create community and be in an affirming space. This summer, the proceeds from the BLgT sandwich made by Misery Loves Co. in Winooski, Vermont will go to Outright Vermont, so they can continue to support youth.

During our time in Burlington and Winooski, we caught up with a few members of the Vermont community. Here are a few of our favorite sandwich stories. Listen to the audio for the full conversation or follow the provided link to the transcript and to find more sandwich stories.

BLgT: What inspires you?

Melissa: The youth at Outright inspire me constantly. I’m really lucky that I get to come to work every day and interact with some of the most fabulous, glittery, sparkly youth ever.

Mattison: My g, without a doubt, is gratitude. Gratitude in my sandwich, my people, my connections that are made. My group here, we call ourselves family by choice. So we have a huge collective of people who support each other.

BLgT: What about the campaign is interesting to you?
Michael: Equal rights for everyone is very important. Vermont is a pretty progressive state, but that doesn’t mean there aren’t inequalities here. Anything we can do to help change that is definitely, something we’re behind.

Leaving Vermont, we headed to New York and the site where it all began. Our New York event was hosted at the Stonewall Inn, making the event that much more special. In 1969, after being fed up with police raids of LGBT friendly spaces, the patrons of the Stonewall Inn –- made up of mostly drag queens, youth, and transgender people, many of whom were of color –- rioted, kicking off the modern LGBT rights movement. Honoring that legacy, our NY center partner is the Hetrick Martin Institute, which supports LGBT youth and some of the most targeted populations within LGBT communities.

The event at Stonewall featured BLgTs by Chef Ash Fulk of Hill Country BBQ. Hill Country BBQ also sponsored the event. Positive energy and the infectious draw of delicious chicken sandwiches drew a crowd of over 200 people throughout the evening. We heard many stories, from a diversity of people. Below are our top Sandwich Stories from New York.

BLgT: Why do you care about equality, why does it matter to you?

Chandler: It matters to me because it affects me directly. As a gay man, I know that in some states, my rights are not nonexistent and in some they are fully protected, and all of the gay community, the LGBT community, we all need to be concerned about rights wherever we are, so that we are all supported and all protected.

Chef Fulk: I chose a funny g. I chose a green pickle because as people may or may not know, Chick-fil-A has come out against [LGBT equality] and I thought we’re doing sandwiches, so I’m going to do a chicken sandwich and put a green pickle on it, and they’re actually the same pickles Chick-fil-A uses.

BLgT: Why does equality matter to you?

Andre: Equality matters to me personally because I am Jamaican and LGBT identifying, specifically trans identifying. And I have lived enough to see injustice and the way people of my persuasion are treated.

BLgT: Why does equality matter to you?

Alexis: The question isn’t why am I for equality, it’s how could people be against it? And usually the reason is just ignorance and belief in traditions that aren’t even traditions, they’re just horrible vestiges that need to be left behind. No one needs to believe in equality, equality just is.

Our next stop is Avon, Connecticut on Tuesday, June 2. Our center partner for the summer in Connecticut is the New Haven Pride Center. The special event in Avon is sponsored by Miller Foods home of Oma’s Pride, Enterprise Rent-A-Car, and Metro Bis, with BLgTs prepared by Chef Prosperi. After swinging through Providence, Rhode Island and Portland, Maine, the truck arrives at Sweet Cheeks BBQ for BLgTs created by "Top Chef" runner-up Tiffani Faison. RSVP for one of these events and/or a BLgT in your city at blgt.us.