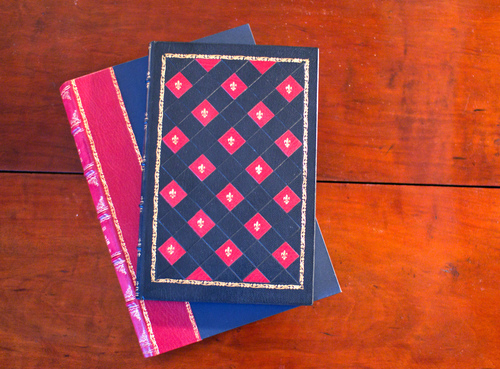 "A persistent and obsessive character may be necessary to be a good bookbinder," says Gavin Dovey, a design bookbinder and founder of Paper Dragon Books.

Paper Dragon Books clients include LVMH, the New York Public Library, the Pier Pont Morgan Library, students at FIT and SVA, artists, graphic designers, wedding planners, self-publishers, and galleries. But Dovey's most satisfying ongoing box project has been for a private collector of signed modern firsts -- whose identity still remains a mystery and who gives Dovey free rein to design what he likes in the making of deluxe clamshells.

"The most difficult part of binding is unhappily the most fun," Dovey says. "The harder a project is, the more satisfying it is. Every time I push myself to learn new techniques, I may encounter many failures, but there's not much that comes close when I finally nail it."

Dovey, is British by birth, but grew up in Germany because his father was in the Armed Forces. While attending high school in Lincoln City (home to the Magna Carta), Dovey discovered the library's trove of rare, well-made leather volume books. To Dovey, a William Morris Kelmscott Press edition of 100 poems of Sappho, complete with a Latin inscription to a lover and the requisite four-leaf clover pressed in an envelope, was "love at first sight."

After a particularly boring day while working at one of a series of random jobs, Dovey picked up a copy of the yellow pages and found the only hand bookbinder listed in the city. In the studio of Mark Cockram, Dovey knew what he wanted to do -- use Cockram's bookbinding tools and create books with his same passion and commitment to excellence. Cockram agreed to take him on as a private student with the condition that Dovey be truly committed to being the best at what he did. For the princely sum of five pounds an hour, Dovey paid Cockram to teach him for a year. At the end of the year, Dovey was to move to London to attend one of the few remaining (though now defunct) full-time design bookbinding courses to gain a formal qualification.

"I learned many techniques, but one of the most important things I learned was a commitment to getting things as near to perfect as possible. Second rate is not good enough," Dovey said. "Work not completed to the highest standard should be remade."

Dovey graduated from the London College of Printing (now called LCC) in 2002. While completing his academic training, Dovey had a job at the prestigious Wyvern Bindery, helmed by the knowledgeable and joyfully patient Mark Winstanley, who has always employed young binderies, many of who have gone on to run binders of their own. After working there for two years, Dovey traveled around the U.K. and Ireland working in a total of eight trade binderies in a variety of capacities.

In 2003, Dovey moved to New York to work for Herbert Weitz at Weitz, Weitz, and Coleman, the last binding store in Manhattan. The bindery's gradual decline and sporadic work led Dovey to look for work elsewhere. He taught as a freelance teacher at the New York Center for Book Arts and other institutions across the U.S., including the Center for Book and Paper Art in Chicago and the Smithsonian Institute.

Dovey started Paper Dragon Books and opened a storefront bindery in 2006. Shortly thereafter, a friend and art colleague offered Dovey space at his current location in Brooklyn. The lower rent meant Dovey could work on the finer aspects of his craft, thereby improving his skills -- from technical innovations to artistic invention and discovery. In June 2011, Dovey co-founded the nonprofit organization Designer Bookbinders of America with the intent to preserve and maintain the highest standards in technique and design used in the creation of design bookbinding.

And what is the hardest part of bookbinding?

"Bringing a book or box along to the very end and making a fatal error, destroying the whole object and having to remake it. The human spirit can only take so much failure. But remember, if it's not right, do it again."