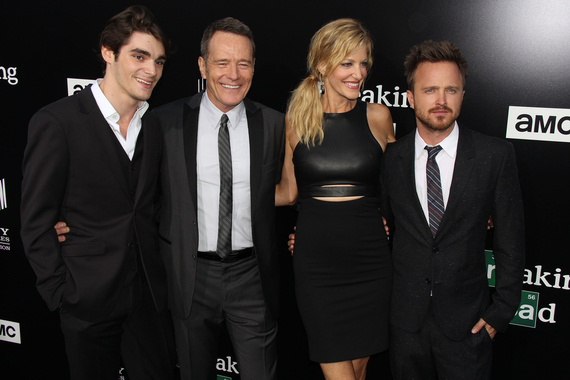 The popular TV series Breaking Bad could be a crash course for entrepreneurs. Skeptical? Take a look at lessons businesses can learn from the story of Walter White, a terminally-ill chemistry teacher turned meth mastermind:

1. Craft a truly superior product or service, in substance (no pun intended) and appearance. The meth that Walter "cooks" boasts 99 percent-plus purity and features a distinctive blue color. As he explains, "[We] will not make garbage. We will produce a product that performs as advertised. No adulterants. No baby formula." [Note: quotes are edited for brevity.]

2. Develop a mystique. Walter White's alter ego "Heisenberg," named after the famous scientist, creates a glow of inscrutability that enhances his reputation.

3. If your aura exceeds your actual footprint, use it to your advantage. As Walter says, "The blowfish puffs himself up four, five times larger than normal because it makes him intimidating [to] the other scarier fish. It's just an illusion. It's nothing but air. Now, who messes with the blowfish?"

4. Imitate Walter imitating Apple and take control of distribution. If possible, wholesale or retail your wares yourself, avoiding a costly and possibly perilous "channel."

6. Don't always trust partners if they have substance issues or if they party too much. Dissipation undermines success.

7. Recognize that you have a lot in common with your enemies and competitors. Walter's brother-in-law Hank is a DEA agent who will stop at nothing to arrest drug dealers and in that sense they mirror one another in ruthlessness.

8. Figure out what your real industry is. As Walter said, "Jesse, you asked me if I was in the meth business or the money business. Neither. I'm in the empire business."

9. Take a back seat when necessary. At one point in the series a young chemist named Gael is murdered, and Hank refers to him as the genius behind the infamous blue meth. Walter can't help but bristle. He tells Hank that Gael's work was derivative and that the real mastermind was probably still at large. Walter's pride sparked further investigation and led to his downfall. If only he had kept quiet...

10. Plumb your true motivation. (SPOILER ALERT) White repeatedly told his wife that he was selling drugs only to support his family. In the final episode we learn that he actually enjoyed the feeling of accomplishment. If he had recognized this sooner, he would have changed his plans accordingly.

Of course, we recognize that Walter White's enterprise was vile and illegal. Nonetheless, lessons from this sordid saga can help you "break good" in business.