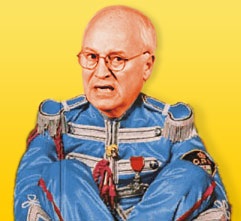 For the last few days, experts have been trying to comprehend the baffling change of heart and mind by Dick Cheney on the topic of Iraq. There is a monumental 180-degree difference between the Dick Cheney seen in the recently unearthed 1994 C-Span footage who calmly explains why it would be a terrible disaster for America to invade Iraq -- and the Dick Cheney we have all seen since 2001 who is the primary cheerleader for the Iraq war and occupation which has resulted in the death of nearly 4,000 Americans.

Now it can be explained. The individual who has been serving as Vice-President since January 2001 is NOT the real Dick Cheney! The real Dick is DEAD! The Vice President is a substitute Dick!

As readers may recall -- in the middle of the Florida recount (or NON-recount as it happened) around Thanksgiving 2000 -- Dick Cheney suffered his fourth heart attack and was rushed to hospital. The official story of course was that he recovered. But what actually happened is that Cheney died in the hospital -- which created a terrible dilemma for the team attempting to place George W. Bush in the White House.

The solution was simple. Karl Rove replaced the dead Cheney with a lookalike robot! An artificial Dick! And while the cyborg RESEMBLES the real Cheney -- it lacks the intelligence, insight, compassion, wisdom and grace of the man it replaced. (It's also a poor shot when shit-faced.)

The clues that tell us Dick Is Dead are all there. It's just that we have just been ignoring them ...

The iconic photo of the Fab Four of the Bush administration in 2004 - walking along a shabby road in Crawford, Texas. 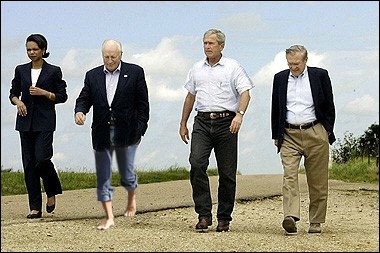 On the videotape showing George W. Bush posing with a plastic prop turkey at the carefully stage-managed photo-op with a handful of US troops in Iraq at Thanksgiving 2003, the President is heard mumbling to the troops what he claims was "cranberry sauce ..." But careful examination by top audiologists reveals that what he is actually saying is "I buried Dick ..." 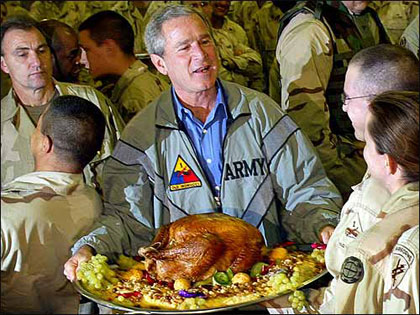 If you watch the videotape of Bush's key 2004 debate with John Kerry and run the tape backwards -- at one point he clearly says "Turn Me On Dead Man" -- a "subliminable" message from Bush that he would like the dead Cheney to turn on the wireless receiver in Bush's suit jacket used to whisper prompts into his earpiece telling him what to say. 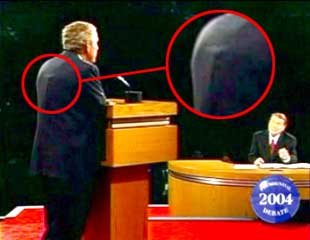 If you look extremely carefully at the transcript of Bush's "Axis Of Evil" speech -- when the third letter of every nineteenth word is joined up and translated into Albanian -- it reads: "Here's another clue for you lot -- the Veep is a bot"Clue #5

In the recent photo of "Cheney" in his official Vietnam Veteran Draft-Dodger uniform ("I had other priorities") the VP is wearing a black badge on his left arm that has the initials "O.P.D." on it. "Obviously Phony Dick"

I am sure that there are other clues I have missed. Please submit your own evidence that DICK IS DEAD!