Here's one dinosaur you do not want to mess with.

Paleontologists working in the Dakotas say they've discovered a new dinosaur species, Anzu wyliei, a.k.a. the "chicken from hell." Named after Anzu, a birdlike demon from ancient mythology, the feathered dinosaur roamed North and South Dakota 66 million years ago. 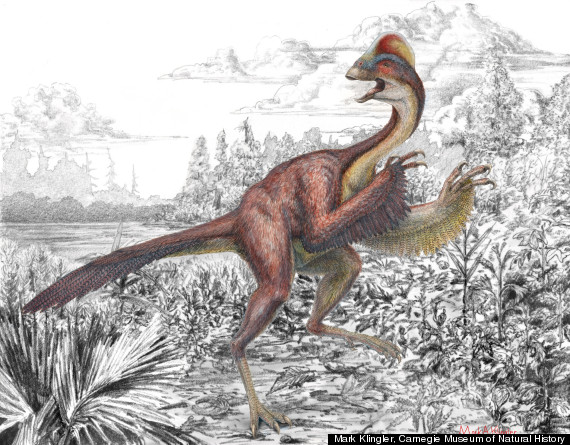 Anzu wyliei -- a birdlike dinosaur nicknamed the "chicken from hell" that roamed the Dakotas 66 million years ago -- appears in its natural environment in this artist's depiction.

"It was a giant raptor, but with a chicken-like head and presumably feathers," researcher Emma Schachner, a postdoctoral fellow in biology at the University of Utah, said in a written statement. "The animal stood about 10 feet tall, so it would be scary as well as absurd to encounter."

Three partial skeletons of A. wyliei were unearthed from the Hell Creek Formation, a fossil-rich region of rocks that spans Montana and Wyoming, as well as the Dakotas. 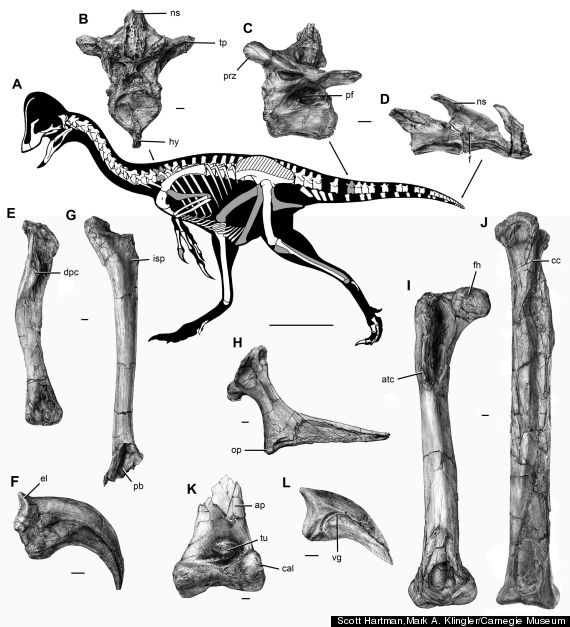 These are the skeleton and selected bones of the new dinosaur species Anzu wyliei.

Researchers from the Carnegie Museum of Natural History in Pittsburgh, the Smithsonian Institution's National Museum of Natural History, and the University of Utah examined the specimens and determined that A. wyliei likely sported a crest and feathery forelimbs. It also had a long neck, a short, thick tail, and killer claws. The dinosaur was more than 11 feet long and weighed around 440 to 660 pounds. The shape of its jaw suggests that it was an omnivore, snacking on vegetation, small animals, and eggs.

The dinosaur belonged to a mysterious group of flightless, birdlike dinosaurs called Caenagnathidae (pronounced SEE-nuh-NAY-thih-DAY), a subset of oviraptorosaurs, or "egg-thief lizards." The researchers said their findings may help shed light on the anatomy, habitats, and evolutionary relationships of dinosaurs in this group.

"We're finding that "caenagnathids were an amazingly diverse bunch of dinosaurs," Dr. Matthew Lamanna of the Carnegie Museum said in a written statement. "Whereas some were turkey-sized, others—like Anzu and Gigantoraptor—were the kind of thing you definitely wouldn't want to meet in a dark alley. Apparently these oviraptorosaurs occupied a much wider range of body sizes and ecologies than we previously thought."

These new findings were published March 19 in the journal PLOSONE.