Watch the flaming fountain in action:

Need some Jesus with your jeggings? Head to Salt Lake City.

On Thursday morning, City Creek Center, the first indoor mall built in nearly three years, opened its doors to the public. Its owner is the Church of Jesus Christ of Latter-day Saints, which hopes that the $1.5 billion temple of consumption will redeem Salt Lake City's blighted downtown, where the Church is also headquartered.

The 700,000-square-foot mall certainly gives off a Biblical air. According to its website, City Creek has two 18-foot waterfalls, fountains that shoot water and bursts of flame while playing synchronized music, a fully retractable glass roof (the first outside of Dubai) and a man-made recreation of the south fork of City Creek, the mountain stream where, in 1847, Mormon pioneer Brigham Young founded the settlement that would later become Salt Lake City.

It is a mall fit for a president -- and might even be graced by one some day if Mitt Romney, one of the Church's most famous members, can score the Republican nomination. City Creek is located just across the street from the Church of Jesus Christ of Latter-day Saints' headquarters, the Temple Square complex. The stores, which include Tiffany & Co., Coach, Nordstrom, Porsche Design, H&M and Macy's will all be closed on Sunday. No restaurants will serve alcohol, save for the Cheesecake Factory and Texas de Brazil. There are no bars.

It has been years since any developer, private or otherwise, has backed such a grand project, given the bleak retail landscape. The last indoor mall built in the U.S., Crystals at CityCenter, opened in Las Vegas in 2009. Since, more malls have been foreclosed on than have opened, with shoppers cutting back on spending and chain stores downsizing.

So far, City Creek looks like an exception. Two thousand people paid $50 to attend the opening gala Wednesday night, while crowds started to line up on the nearby Main St. at 2:00 a.m. in preparation for Thursday's 10:00 a.m. opening. Ninety-two percent of the mall's space is already leased.

The Church has an enviable partner in the venture: Taubman Properties, the Detroit-based owner of some of the world's most successful luxury malls. Taubman, which developed the property and leases the underlying land from the Church, invested $76 million on top of the estimated $1.5 billion in cash that the Church gave to the project.

The Church's money came from City Creek Reserve Inc., a private real estate company it owns. According to the Church, all the money was raised through private business ventures, and none from the 10 percent of income Mormons are required donate, or tithe, to the Church.

With City Creek, Mormons have a new way of showing financial devotion. Through its rental contract with Taubman, the Church gets a percentage of mall revenue -- and its fortunes rise and fall depending on sales.

City Creek shoppers can rest assured that their purchases -- a $535 Porsche Design tobacco pipe, perhaps? -- will bring them a little closer to God, or at least Temple Square. 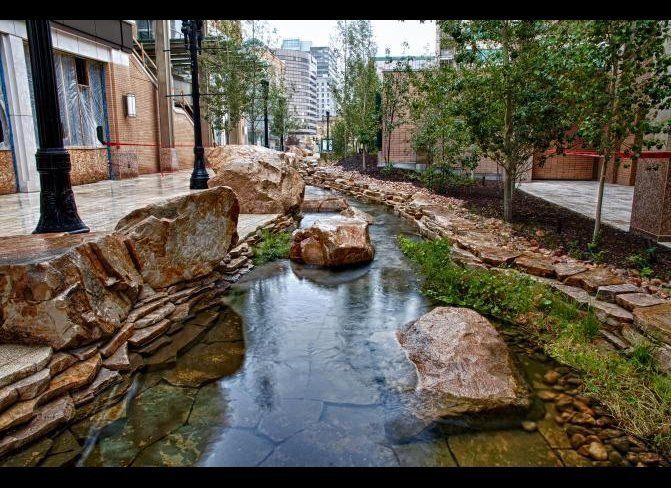