What's the deal with coffee rings? You know them well -- those dark, circular stains that inevitably form when you're drinking a cup of coffee. Whether you accidentally spill a little on your desk or it forms a ring inside the cup, coffee always makes a very distinctive splotch. Why does a ring always form, instead of the coffee spreading out into a uniform layer? Why is there always a dark, defined edge?

You might not have given it much thought, but in 1997, a group of physicists got together to get to the bottom of the mysterious coffee ring. In the science journal "Nature," physicists published a study on the way particles move in a drop of liquid. The particles in coffee, they found, move to the perimeter of the drop, which is why a dense ring forms after evaporation. When coffee evaporates, the particles don't move with the disappearing liquid, but stay where they are on the perimeter of the spill. Because the particles stay in the same place instead of moving inward as the volume of coffee shrinks, the perimeter of the stain stays in tact, forming a ring. 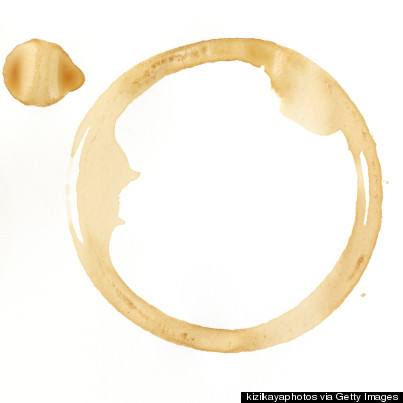 Not entirely satisfied with this explanation, another group of scientists continued to explore the effect. More than a decade later, in 2011, Peter Yunker and his colleagues at the University of Pennsylvania published a study that answered the question in full.

For a detailed explanation, watch the video below. And then go enjoy a nice, hot cup of coffee.