Cyber Monday has been the biggest online shopping day in recent years, as workers return to offices and use computers to make holiday purchases. ComScore expects online sales to hit a record of about $1.5 billion by day's end.

Online sales were up 25.6 percent as of 3:00 pm EST on Monday, compared with the same period a year ago, according to International Business Machines Corp which tracks transaction data from 500 U.S. retail websites. In 2011, Cyber Monday year-over-year growth was 15 percent by 3:00 pm, IBM said.

"So far, that is not the case," said Jay Henderson, the strategy director for IBM Smarter Commerce. "Extending the shopping season has really just fueled additional online spending rather than cannibalizing days later in the season."

"The early eBay numbers are impressive," said R.J. Hottovy, an equity analyst at Morningstar. "They put together an effective marketing plan across several channels this holiday season - online, television and print."

EBay has been trying to move away from its online auction roots, emphasizing new items selling at fixed prices to better compete with Amazon.

"The numbers suggest they're having success reintroducing consumers to the 'new eBay,'" Hottovy said.

PayPal, the payments division of eBay, said the volume of mobile transactions it processed by 2:00 pm EST on Cyber Monday almost tripled versus the same period last year.

Client sales on Amazon.com were up 52 percent during the first part of Cyber Monday, ChannelAdvisor also reported.

"Amazon continues to look impressive to us since it is building on top of large numbers," said Scott Tilghman, an analyst at Caris & Company.

Online retailers held back some of their best promotions and biggest discounts until Cyber Monday, which helped spur sales, IBM's Henderson and ChannelAdvisor's Wingo said.

Amazon offered $30 off its 7 inch Kindle Fire tablet, which usually sells for $159. The deal was only available on Cyber Monday and was still available at 5:00 pm EST.

These types of discounts attract shoppers to Amazon and eBay's websites, where they may purchase other items too, Wingo explained.

'WII U' SELLS OUT

EBay has also benefited as some hot holiday items sold out this year at some retailers. When that happens, shoppers often turn to eBay, where third-party sellers are usually still offering the items at higher prices.

Nintendo Co Ltd said on Monday its new "Wii U" video game consoles sold out at retailers in the United States.

The devices were still available on ebay.com on Monday at 10 to 20 percent above the suggested retail price, according to Jesse Divnich, an analyst at video game research firm EEDAR.

The average online order size on Cyber Monday was $130.30 as of 3:00 pm EST. That was down from almost $200 during the whole of Cyber Monday last year, according to IBM.

Online order sizes are shrinking as consumers buy more digital goods, such as e-books, music and video, which generally cost less. However, discounting is also pressuring order size and that could feed through to lower margins, Morningstar's Hottovy said.

EBay margins should be relatively well protected because the company charges a commission on sales by third-party merchants and retailers.

Amazon operates like this, but, unlike eBay, the company also has its own product inventory so it may be exposed to margin pressure, according to Colin Sebastian, analyst at R.W. Baird. (Reporting By Alistair Barr and Malathi Nayak in San Francisco; Editing by Maureen Bavdek and Jim Marshall)

PHOTO GALLERY
10 Cities Who Shop The Most Online

Cyber Monday Online Sales To Hit Record Of $1.5 Billion
10 Cities Who Shop The Most Online 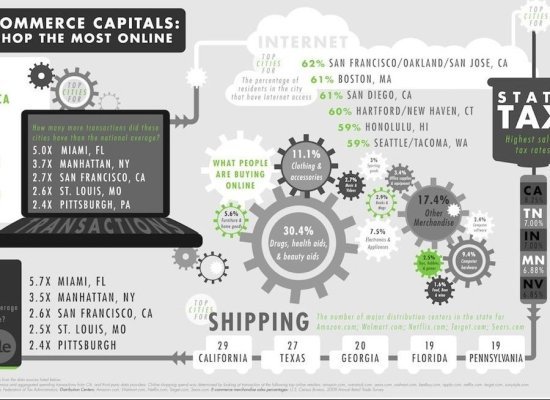