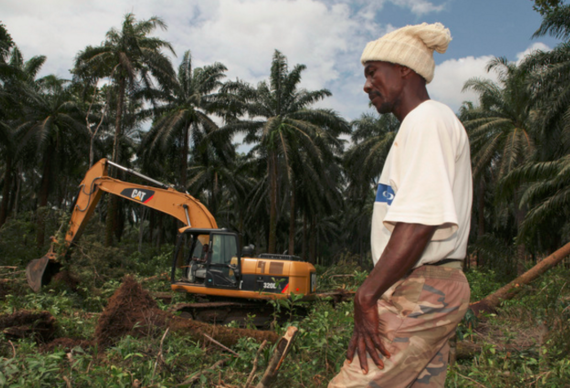 Reports about land-grabs in Africa often attack the corporations that stand to profit from such projects. But little is said of the international development banks that fund the projects.

Development banks are supposed to ensure adherence to human rights in the projects they fund, because human rights protection is central to sustainable development. Instead, their practices provide fertile ground for violations by encouraging companies to cut costs and maximise profits, impoverishing local communities in the process.

Over the past three years I have been studying the local experiences of a large bioenergy project in rural Sierra Leone.

This project leased 40,000 hectares of land and relocated the farms of thousands of people to grow sugar cane and export ethanol to Europe. The project is primarily owned and managed by a private corporation, but is funded by a consortium of development banks and bilateral development organisations in Europe. The funding exceeds €250 million.

My findings indicate that the project has had a number of negative effects on local communities. These include restructuring of local power dynamics, the marginalisation of women and increased economic inequality.

Women in the surrounding communities have very little ability to accept or reject the project. They also have no direct access to economic benefits, such as land lease payments and employment opportunities.

The project has also disrupted traditional networks of authority between chiefs and local people, creating new forms of disempowerment and dependency.

For example, it has promoted and enforced the use of new forms of knowledge based on formal legal procedures to which local people have little access. These privilege and protect the corporation and the few local elites with the resources to afford formal mechanisms of justice.

What's more, the project has promoted economic inequality. This is in direct contradiction to the basic claims of its proponents. In the locally dominant patron-client system, senior men appropriate most of the economic benefits, and progressively smaller portions are allocated to those on lower levels of the local hierarchy.

As a result, all women, most young men, and families other than the direct descendants of the village elites receive minimal or no economic benefits. This is despite the fact that everyone in the surrounding communities has had their livelihoods significantly disrupted by the bioenergy project.

These problems are echoed in findings from dozens of other studies conducted around the world over the past five years.

Where does responsibility lie?

The usual response is to blame those most likely to benefit economically from such projects - the corporations. This seems like the obvious answer, but it is also too simplistic.

In the case I have been studying it became clear, for example, that those leading and working for the company generally had good intentions. They often believed that their project would have a positive influence on local communities and would help develop Sierra Leone.

They argued that the money they invested in employment and land lease payments would provide financial security for local communities. They were distressed by Western journalists, human rights advocates and researchers who argued otherwise.

But when the negative effects of the project were described to them, senior company officials on the ground regularly defended their policies and practices. They made the point that their primary responsibility was not to the communities, but to their funders: the international development banks.

The corporations argued that they were under enormous pressure to make the project profitable as soon as possible. They also wanted to start repaying the loans from the banks on schedule so that they could earn the reductions in interest rates they had been promised if the project met the targets.

To achieve the targets, concerns about women's empowerment, restructuring of customary power relations, or economic inequality were de-prioritised. They were seen as something to be addressed only after the project was economically viable.

The staff required to meet the initial targets were engineers, agriculturalists and farmers. Gender specialists, anthropologists, sociologists, or human rights advocates were unnecessary. There was no incentive, in essence, to prioritise those concerns or to spend scarce resources on such skills.

For all their rhetoric about the positive impact the project would have on sustainable human development, the development banks and bilateral funders' funding mechanisms did not incorporate incentives to achieve such outcomes.

As a result, the company was motivated to maximise profit and ensure financial viability. Companies, by their nature, will prioritise only what they are required to prioritise and pursue objectives that will reap them financial rewards.

We must, therefore, demand more of the development banks. Why do they prioritise only the profitability of the projects they fund?

Why not build in their funding mechanisms means to reward positive socioeconomic impacts, including women's empowerment, economic equality, or political inclusion?

The banks have both the responsibility and the power to change the way the contemporary land rush affects communities. They have it in their power to avoid the negative socioeconomic effects and ensure projects are implemented in a way that respects people's human rights. It is time we demanded it of them.

Gearoid Millar, Lecturer in the Institute of Conflict, Transition, and Peace Research, University of Aberdeen