When the Director of the Immigration and Customs Enforcement Agency's "Secure Communities" program, David Venturella said, "Have we created some of the confusion out there? Absolutely we have," at a speaking event last week, he showed that my first blog post here titled, "Democracies Don't Govern in Secret," was wrong. Not only does this democracy govern in secret, it also runs on lies. 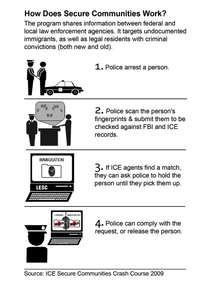 Venturella is in charge of the fastest spreading deportation program in the country. The Orwellian named "Secure Communities" program ropes local law enforcement into immigration by sharing fingerprints from anyone booked at a local jail with the federal immigration authorities. It currently operates in over 700 jurisdictions and is scheduled to be active nationwide by 2013.

Critics including the Sheriff of San Francisco and the Arlington, VA county board worry that the program undermines community-policing, incentivizes racial profiling, prevents victims of crimes from approaching police, and creates a burden on states who will be housing more detainees under the effort. However, across the board, even the agency itself agrees that it hasn't been forthcoming with information or consistent with details.

The lack of information and continued mixed messages from the administration moved my organization, represented by the Center for Constitutional Rights and Cardozo School of Law to sue the agency for transparency under the Freedom of Information Act this past Spring.

On December 9th, we'll be in front of a judge arguing for an emergency injunction to release documents related to local governments ability to choose not to participate in the program.

We feel its necessary because the program is being implemented at break-neck speed and in that haste, women like Maria Bolaños are being caught up in the system. Bolaños is a survivor of domestic violence whose call to the police for help resulted in deportation proceedings under the Secure Communities program.

She confronted Venturella, the director of the program trying to deport her, at a speech he gave in Washington. D.C. Instead of engaging Bolaños or responding to her request for her case to be dropped, Venturella ducked the issue and denied responsibility, saying that her case had nothing to do with Secure Communities, a fact that the Washington Post originally reported on and was reconfirmed by ICE within hours of Venturella's response.

The Woodrow Wilson Center event was emblematic of ICE's track record related to the program. In admitting responsibility for creating the confusion, Venturella was referring to the contradicting statements the agency's made in the past. In September, ICE released a document called "Setting the Record Straight" where they stated, "ICE will discuss any issues... which may include removing the jurisdiction from the deployment plan." Then in October, after Arlington, VA, San Francisco, and Santa Clara, CA took the opening as their cue to get out of the program, ICE claimed, ""We do not see this as an opt-in, opt-out program."

Advertisement
However the "confusion" is not only in the past and at this point, is a euphemism for what the
Washington Post calls "Reversals Sowing Mistrust."
As if lying to a domestic violence survivor wasn't bad enough Venturella's other remarks painted a picture of a program wrought with more contradictions, gross mismanagement, and secrecy. Venturella opened the event saying, "The program that I oversee the locals do have the control of what information gets sent to us. We're only going to respond to what is being provided to us." But later added, "There was an impression created that local law enforcement could stop sending fingerprints to the federal government... That is not an option." Only to then comment, "Under Secure Communities one of the responsibilities that the State Identification Bureau [is] to validate...unique identifiers. If they're not going to do that then we can't push that information to our system. So that's the control that they have."

Beyond the constant confusion about local governments' ability to opt-out of the program, Venturella frustrated advocates when he revealed there is no official mechanism to receive complaints for cases similar to Bolaños, Demonstrating his own lack of knowledge of the program he directs, he referred any complaints to ICE's civil rights department, a department that does not currently accept complaints generated from the Secure Communities program.

The back and forth, dishonesty, and revelations of mismanagement would move me to put an end to the program. But with thirteen states yet to join the program, numerous activated jurisdictions still trying to get out, and its current spokespeople unable or unwilling to set the record straight, isn't it time for the courts to demand that they at least uncover the truth?

To model the transparency we believe ICE should have, you can watch the entire video at http://www.youtube.com/user/NDLONvideos#p/a/u/1/tO49b64FCUg