Happy Diwali! How are you celebrating Diwali this year? Share your story with us. Email your photos and reflections to us at religion@huffingtonpost.com. Text submissions should be 300-400 words in length. We will accept them until Nov. 15, 2012.

[Scroll down for live updates.]

In 2012 Diwali, the festival of lights, will celebrated on Nov. 13 by Hindus, Jains and Sikhs around the world. The word Diwali comes from the Sanskrit deepavali, which means a row of lights. The festival of Diwali symbolizes the victory of light over dark, good over evil and knowledge over darkness.

Diwali is one of the biggest festivals in the Hindu calendar and there are multiple reasons why Hindus celebrate this festival. The most popular narrative, based in the ancient Sanskrit epic Ramayana, is of Lord Rama, his wife Sita and brother Lakshmana returning to their kingdom Ayodhya after defeating the demon king Ravana.

On that dark new moon night, the residents of Ayodhya joyfully lit oil lamps to welcome Rama, Sita and Lakshmana back to the kingdom. Following in that tradition, Hindus celebrate Diwali by lighting oil lamps, bursting firecrackers, cleaning and decorating their homes, distributing sweet delicacies and gathering with friends and family. In Hindu homes around the world, people gather to offer prayers to Sita and Rama, Radha and Krishna, Lakshmi, the goddess of wealth, Ganesh, the god of auspiciousness. For many in the Hindu community, Diwali is also the beginning of a new year. A popular greeting around this time is "Shubh Diwali."

Click through the slideshow to view photos from Diwali celebrations: 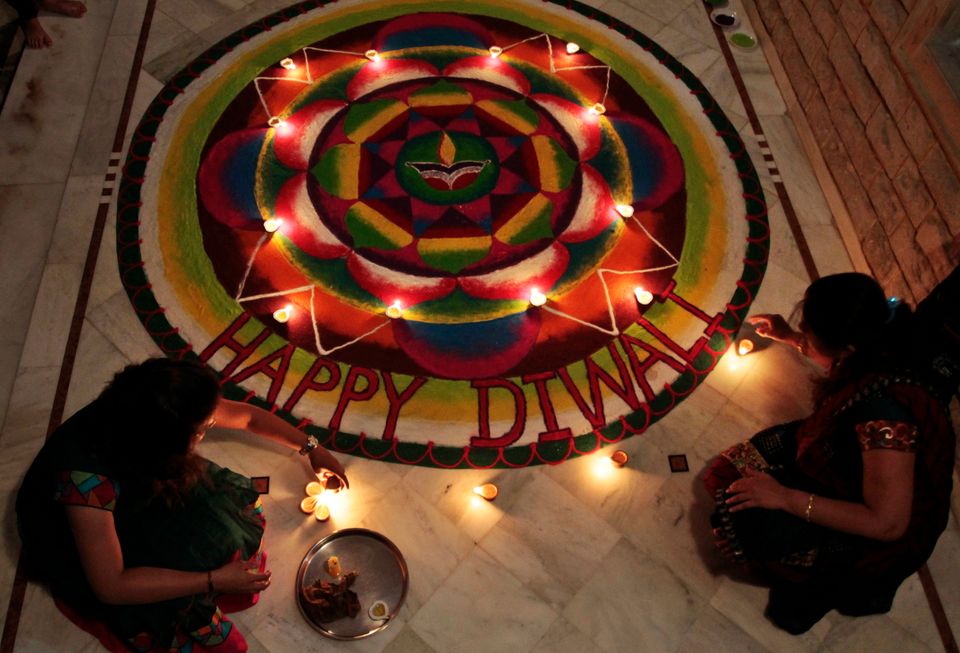 1 / 22
Members of a Hindu family place earthen lamps on near rangoli, a hand decorated pattern on the floor, ahead of the upcoming festival of Diwali in Ahmadabad, India, Friday, Oct. 21, 2011. On Diwali, also known as the Festival of Lights, Hindus light lamps to signify the victory of good over evil. New clothes are worn, gifts, traditionally of sweets, are given and prayers are offered to goddess Lakshmi. (AP Photo/Ajit Solanki)
AP