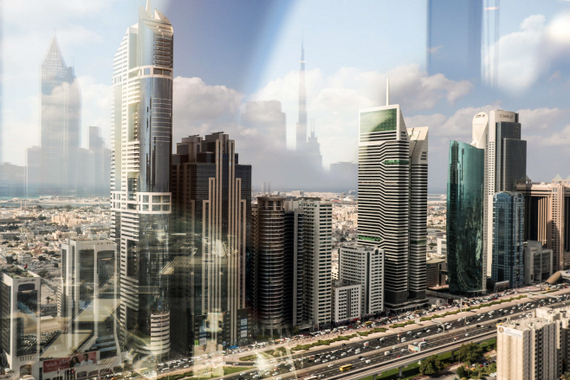 [The picture of Sheikh Zayed Road in Dubai was taken on Jan. 24./ Source: AFP, Yonhap News]

By AsiaToday reporter Jina Koh - Dubai has joined the global battle to become a FinTech hub. With decades of growth, the city has developed its infrastructure to become a key business center and is now placing its focus on FinTech sector. The Dubai International Financial Centre (DIFC) has launched a new FinTech accelerator program in Dubai last month in collaboration with global consulting firm Accenture.

The new initiative, called FinTech Hive, aims to provide mentorship to startup entrepreneurs to support their innovative development. It also includes a plan to transform DIFC into a global FinTech hub. Currently, seven to 10 startups have confirmed their participation. Through a 12-week accelerator program, entrepreneurs will compete and work together to address the needs of the FinTech industry.

Its partner Accenture has a positive view on Dubai's capability to become a FinTech hub. "DIFC is uniquely positioned to become the regional hub for FinTech," said Sushil Saluja, Accenture's senior managing director for Financial Services, Europe, Africa, Middle East and Latin America region, in a statement. The reason behind such program is also related to the growth of local startups, like Uber-like local player Careem, mobile payment provider Beam Wallet and online shopping mall Souq.com.

In particular, Careem has grown remarkably fast in the region. According to Careem co-founder Magnus Olsson, the company has grown fast since its foundation in 2012. At present, it is seeing monthly revenue growth of 25 to 30%. It has about 6 million users, 150,000 drivers, and services in 52 cities across 11 countries in the Middle East, North Africa, Pakistan and Turkey. In an interview with the Arabian Business on Jan. 27, Olsson revealed that the company is targeting a presence in between 70 and 80 cities in total by the end of this year.

Dubai's "Smart City" is ready as well. NEDAA, a Dubai-government-owned telecommunications corporation, is planning to utilize the city's Internet of Things (IoT) ecosystem through a strategic partnership with Nokia. Last December, the two companies established the Innovation and Creativity Lab, with a purpose of providing solutions that aid in government and mission-critical services across various business areas, including education, healthcare, public facilities and transportation.

The Dubai government has launched the "Smart Dubai Initiative" in 1999, when global internet penetration was less than 5%. According to Mohammed bin Rashid al Maktoum, Prime Minister of the UAE and Ruler of Dubai, the initiative has continued to grow since then and Dubai now boasts 545 smart services and initiatives from a variety of partners and government entities.

Experts are responding positively to Dubai's plan for a FinTech hub. David Horton, head of innovation at Synechron, told PYMNTS that, Dubai is easily giving cities like London, New York and Singapore a run for their money as a thriving FinTech center.

The city's environment for various business industries is one of its strong points. The emergence of new and influential business ventures has led to increased demand for online and mCommerce business. Such environment is optimal for running a digital-first business. "Dubai has always been at the forefront of technology adoption on multiple levels. It is forward-thinking beyond its years and is a stable place for setting up roots in the long term," said Gaurav Dhar, owner of Marshal Equipment & Trading.