En route to the Lisbon-Estoril Film Festival, the lively film director who shared the airport taxi with me waxed about the films of French auteur Philippe Garrel, whose 40 year career is being honored by a retrospective here at the festival. "The images stay with you!" she said beaming. "Black and white and mute. All about love!" In the lobby of my hotel, I overheard a young man say the same: "His films are extraordinary!" he said. "All about love! Love! He believes in love. And so does Philippe," he winked. "I have known him since I was four years old in Paris. He was my neighbor. Would you like to meet him?" 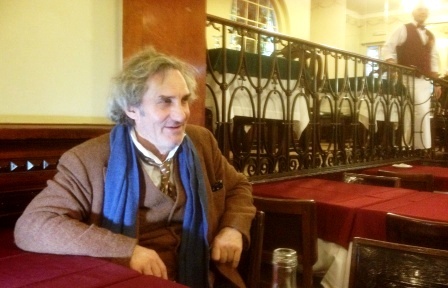 So, an hour later I met Philippe Garrel and his girlfriend, a painter named Muriel, in the hotel lobby. Muriel whispered to me, radiant: "This is a new love! We have been together a year. It is wonderful to feel like you are twenty again. Love comes just out of nowhere, as a surprise."

Philippe leaned forward, elegant in his corduroy jacket and posh tie, and offered his own statement: "Love is the most important thing in the world."

Six of Garrel's twenty-five fiction films are being screened at the festival this week. The film screened that night was The Secret Child, a 1979 black and white film which began--or so it seemed--as an auspicious tribute to love: a young couple embrace in silent joy in a garden, and then become addicted to each other's embraces, their melancholic eyes.

But the film, which is structured through a series of cryptic intertitles, develops into something more perplexing. The young woman, played by Anne Wiazemsky (a fetish actress of both Bresson and Godard), seems to be, despite her newfound intimacy, very sad. The young man, at a certain stage, goes mad and ends up in a clinic. Then the girlfriend in turn is sick, and he visits her in a hospital.

Love seems to be more about support in a suffering world, an oasis of intimacy, than flowers and chocolate. One shot is a blood-stained sheet; another is of trembling hands.

What makes this film alluringly beautiful is one is never quite sure what is going on. The journalist next to me scratched his head when I asked, following the film, "What exactly did that woman do for a living?"

Then when I asked the director himself, he was no less revealing. "I don't remember," he said. "That film was 35 years ago."

"But why is the young woman so sad?"

"Perhaps because the boy is poor?" he surmised.

The lyrical film offered many chances to muse in the ellipsis--and to puzzle over the meaning of the title. Ostensibly "the secret child" is the woman's bastard son, from a previous relationship, but it also seems to refer to the secret child in each of the lovers, a pained vulnerability.

Commenting on how he met the challenge to film "intimacy", the director announced: "Film is not an intellectual art. I did not choose to shoot this film according to any ideas. Film is like painting. You have the camera, the people. You create in the moment. Film is an art, not a result. It is gesturelle. I don't make films according to formulas, like films in America of a certain period. "

Earlier, in a private interview in a Lisbon café with two Portuguese students, the director eloquently spoke about the French cinema tradition versus the American. He had been very excited, as a young film director, son of famed actor Maurice Garrel, to discover that France could rival Hollywood, the mega-capital of cinema, with its own unique styles of acting, use of the camera and storyline.

The style of A Secret Child is indeed very "French", reminiscent of Godard, Truffaut and Eustache, with its loose plot and the high pitch of emotion created through understated black and white frames of the couple in quotidian places, like the bedroom, the clinic, the street. But one of the Portuguese students questioned whether such films can be seen, today, as dated.

"Black and white can never be out of style," Garrel commented.

Cinema was born in black and white, so we can never leave it behind. Black and white is perfect! You do not have to worry about some color in the mise-en-scene being out of place or ugly in black and white. And yes this is a very French film. Each country has its own unconscious, so of course the films reflect a different unconscious.

Next in the works for the director: a new film, L'Ombre des femmes, about the "secret" sexuality of men and women.