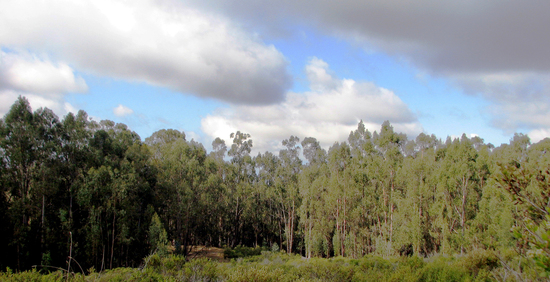 The City of Oakland just lost millions of dollars in federal funding. Given what the intended use of that money was for, that's a good thing. Combined with similar funding for UC Berkeley and the East Bay Regional Parks District (EBRPD), over 400,000 trees across seven Bay Area cities were to be chopped down and thousands of gallons of cancer-causing herbicides spread on their stumps to prevent regrowth. Slated for eradication were the vast forests above the Caldecott Tunnel and Caldecott Field, North Hills Skyline, Strawberry and Claremont Canyons in Berkeley, and 11 regional parks including Sibley, Huckleberry, and Redwood in Oakland. Costing nearly $6 million, the plan would have radically transformed the character and appearance of the Oakland hills. Why? 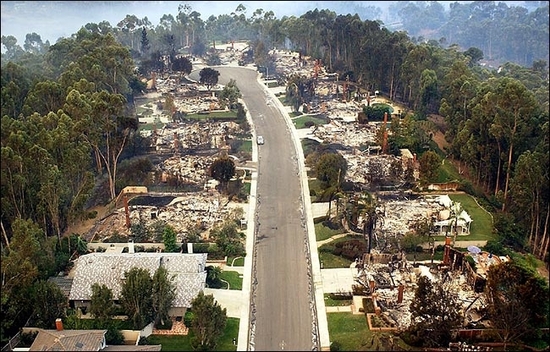 The Scripps Ranch Fire of 2003 burned 150 homes but none of the Eucalyptus abutting those homes.

If you believe proponents, it is because the trees pose a heightened risk of fire. Since the infamous Firestorm of 1991 which burned scores of homes and killed 25 people, they have worked tirelessly to turn public opinion in the East Bay against Eucalyptus and Monterey Pine trees. Chief among their claims is that these trees were to blame for the ferocity of that fire because they are alleged to possess unusually high quantities of volatile oils that make them more flammable and prone to shooting off embers which enable the spread of fire. These claims have been repeated so many times they are often regarded as self-evident, even though the evidence does not support them, nor does the history relating to the ignition and spread of past fires. Indeed, the 1991 fire itself (and a later 2008 fire) started in grasses, the very sort of vegetation that clearcutting is intended to proliferate throughout the hills. In fact, the stated aim of the deforestation effort is to replace Oakland forests containing species of trees that are among some of the tallest in the world with shallow grasses that are highly susceptible to fire and which the EBRPD admits are "one of the most dangerous vegetation types for firefighter safety due to the rapid frontal spread of fire that can catch suppression personnel off guard."

In a report highlighting the heightened fire risk which would have resulted from this plan, David Maloney, former Chief of Fire Prevention at the Oakland Army Base, criticized the spread of misinformation about these trees as motivated by native plant ideology, calling it "a land transformation plan disguised as a wildfire hazard mitigation plan" that will "endanger firefighters and the general public" and "be an outrageous waste of taxpayer money." And he's not alone in his concerns.

The U.S. Forest Service objected, saying it would "increase the probability of [fire] ignition over current conditions" because "removal of the overstory trees can introduce changes to the environment which increase fire behavior in undesirable ways."

The U.S. Fire Administration Technical Report on the 1991 Fire led to the conclusion that removal of the trees would lead to growth of highly flammable brush species, noting that "brush fuel types played a significant role in the progression of the fire" and that brushland made up "a large portion of the available fuel."

The Environmental Protection Agency stated that it is predicated on "extensive use of herbicides" and "risks posed to human health and the environment from that use." It went on to express concern about the "potential impacts of climate change," including "the length and severity of the fire season." 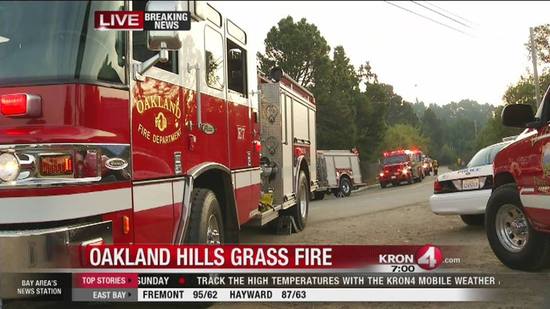 During the summer, 5,200 California firefighters battled 14 fires across the state. The vast majority of the fires were in grass and brush, with a few in so-called "native" Oak woodlands.

But you would not know any of this by reading Bay Area newspapers, watching Bay Area television news programs, listening to local radio stations, reading local magazines, or hearing Bay Area politicians. These are discussions those who oppose this plan tried to engage in with the Mayor, the Oakland City Council, the media and even plan supporters in order to find a compromise, but were rebuffed. Instead, the "need" for deforestation and herbicide use was deemed "self-evident" and opponents were labeled as indifferent to public safety who debased the memory of those who died in the 1991 Firestorm.

In the absence of public discussion about the expertly substantiated criticism that the plan would have increased rather than reduced fire risk, exposed citizens to huge amounts of dangerous chemicals, released over 17,000 metric tons of greenhouse gases into our environment, poisoned and displaced wildlife, radically altered the appearance of our parks, threatened homeowners values by degrading the aesthetics upon which those values depended, eliminated erosion control for hillside homes, and caused a variety of other harms, the public was denied information that would have allowed them to make a sound and informed choice. This troubling bias does not honor the memory of those who died in that tragic fire 25 years ago; it shames it. Their loss should have served to embolden our resolve to prevent a recurrence of their tragedy through rigorous public debate, rather than hobbled us with emotionally charged rhetoric that stifled discussion before it was allowed to begin and threatened to turn the response to that fire into the root cause of yet another disaster.

For while opponents sought to elevate the discussion on this plan to prevent a future tragedy, local media, politicians, and supporters proved themselves incapable of moving beyond a narrative that was so sensationalist and even after more than two decades, so raw, that the abandonment of caution, reason, and critical analysis were paradoxically and counterproductively portrayed as the moral high ground. It left opponents no choice but to force the discussion in a court of law, a point of view that ultimately prevailed with FEMA. Whether the Mayor, City Council, deforestation advocates, and Bay Area media outlets learn from their failings going forward remains to be seen. But one thing is abundantly clear. If the result of the lawsuit proves anything, it proves opponents of deforestation and poisoning were right.

Jennifer Winograd contributed to this article.