Despite those who proclaim the death of the book as well as death of film, it has been a great year for books about movies.

Four of our smartest film critics released thought provoking new books which take a look at the big picture. They are The Big Screen: The Story of the Movies by David Thomson, Do the Movies Have a Future? by David Denby, Film After Film: (Or, What Became of 21st Century Cinema?) by J. Hoberman, and Gods Like Us: On Movie Stardom and Modern Fame by Ty Burr. Each are recommended.

Looking over the other film books released in 2012, it's striking how many of the best of them -- or at least the most compelling and interesting titles -- are biographies, memoirs or a hybrid biographical-career study. The movies are about story-telling. And if you have an interest in film, there is something about the life story of an actor or director that makes for good reading -- especially if that story is well told or groundbreaking in some way.

Here are a baker's dozen of the best film books published in 2012, listed alphabetically by author. Admittedly, I love old movies and classic Hollywood -- and this list reflects that preference. One could ask, "Are these the best film books of the year?" I think so. The annotated slide show highlights the dozen recommended works listed here.

There are also four additional titles noted at the end which couldn't be included in a top 12, but are also worth checking out.

Colleen Moore: A Biography of the Silent Film Star, by Jeff Codori (McFarland) is an appealing study of the life and films of one of the biggest stars of her time. Regrettably, this otherwise worthwhile book is marred by a lack of copy editing which distracts from the author's commendable efforts.

Mamoulian: Life on Stage and Screen, by David Luhrssen (University Press of Kentucky) paints the influential stage and film director as a socially conscious artist who sought to successfully combine art and commercial entertainment -- which he did. Rouben Mamoulian's credits include three of the most popular shows in the history of American musical theater, Porgy and Bess (1935), Oklahoma! (1943) and Carousel (1945), as well as noted films like Dr. Jekyll and Mr. Hyde (1931) and Queen Christina (1933). I love that latter film.

Twitch Upon a Star: The Bewitched Life and Career of Elizabeth Montgomery, by Herbie J Pilato (Taylor Trade Publishing) is based on the author's interviews with Elizabeth Montgomery (the daughter of actor Robert Montgomery) prior to her death in 1995. It includes never-before-published material from individuals associated with the actress/activist's life and career before, during, and after her hit TV series Bewitched (1964 to 1972).

Thomas Gladysz is an arts journalist and early film buff, and the director of the Louise Brooks Society, an Internet-based archive and international fan club devoted to the silent film star. Gladysz has contributed to books, organized exhibits, lectured, appeared on television and radio and introduced Brooks' films around the world. 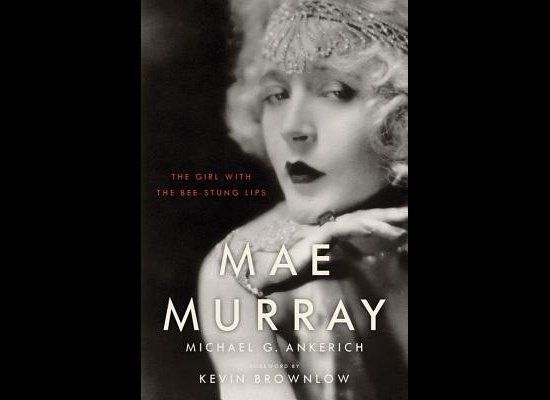 1 / 12
Mae Murray: The Girl with the Bee-Stung Lips
<em>Mae Murray: The Girl with the Bee-Stung Lips</em>, by Michael G. Ankerich (University Press of Kentucky) Mae Murray, known as "the girl with the bee-stung lips," was a fiery presence in silent-era Hollywood. Renowned for her beauty, she was a major star at Universal, playing opposite Rudolph Valentino in <em>The Delicious Little Devil</em> (1919) and most famously, in the title role of Erich von Stroheim's <em>The Merry Widow</em> (1925). Murray's moment in the spotlight, however, was fleeting. The introduction of talkies, a string of failed marriages, a serious career blunder and a number of legal battles left the former star in a state of poverty and mental instability that she would never overcome. In this intriguing, thoroughly researched biography, Michael G. Ankerich traces Murray's career from the footlights of Broadway to the klieg lights of Hollywood, charting her rapid ascent to fame and decline into obscurity. The book includes an interview with actor George Hamilton, whom the actress befriended and danced with at the end of her life.